Rice Whiskey Makes A Small Niche For Itself In United States

Although spirits made from rice have been common in East and Southeast Asia for thousands of years, in the world of whiskey, rice is still a little-used ingredient. There are, though, a handful of distilleries in the United States producing whiskey from the world’s most widely-eaten staple crop.

What’s intriguing about these spirits is the varying angles of approach distillers have taken towards rice-based whiskey. Atelier Vie’s Riz Whiskey, made in New Orleans, is an unaged American whiskey, although an aged version is in the works. Portland’s Vinn Distillery, meanwhile, uses a traditional recipe brought over to the States from southeast Asia.

At Atelier Vie, the impetus for trying a rice whiskey was geographic: Louisiana is a major producer of the grain. When owner and distiller Jedd Haas started looking into the question of whether other American distillers were making spirits from rice, he found that the existing products seemed to all be made with an Asian-style fermentation (more on that in a minute). “So my thought,” he says, “was to take Louisiana rice—which I get from a place called Falcon Rice Mill in Crowley—distill it whiskey-style, and make some whiskey out of it.” 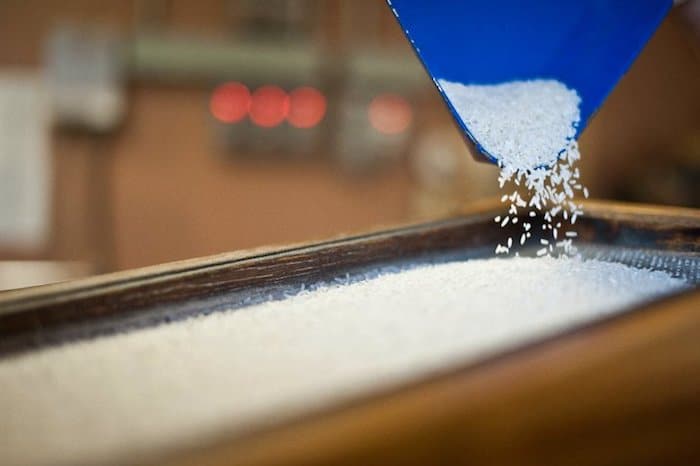 For the most part, Haas’s process looks a lot like the ones used by other American whiskey distillers: the rice mash is cooked, enzymes are added for liquefaction and saccharification, and yeast—a malt whiskey strain, in this case—is added to begin the fermentation process. The fermentation period is fairly long, typically two or three weeks. From there, it goes into the still on the grain, and Haas distills it twice.

So far, Riz has mostly been available in unaged form, with the exception of a limited-edition bottling that was aged 13 months. The most recent batch, however, is currently all aging in a mix of used bourbon and malt whiskey barrels, and Haas plans to do the same with future runs.

As to what Riz actually tastes like, Haas says the influence of both the rice and the whiskey-like distillation process are in evidence. According to one reviewer, the unaged version has notes of chocolate, mint, and black licorice. Stay tuned for the barrel-aged version—currently, Riz is available in Louisiana, Arkansas, and Mississippi.

As Haas found, though, there are also several American distilleries making rice whiskey using a process closer to how grain spirits are made in China and Southeast Asia.

Vinn distillery and the baijiu way

China’s staple liquor is baijiu, a clear spirit often made from sorghum. Like vodka, though, baijiu can be made from literally any fermentable foodstuff, and in southern China and Southeast Asia, it’s often made with rice. That’s how the Ly family—the owners of Vinn Distillery in Portland, Oregon—have been making baijiu for six generations.

“[Distilling] is a common thing” in Vietnam, Michelle Ly told me when I visited the distillery. “What they do with the baijiu is use it to honor ancestors—pray with it, celebrate with it, mourn with it, cook with it. Everything is done with baijiu. So most families will know how to make it, because it’s such a big part of their life.”

Nine years ago, the family got the idea to turn that passed-down distilling knowledge into a business. Originally, they wanted to offer baijiu at the restaurant they owned at the time, but a couple of years after starting the distillery, one of the five siblings involved in the business picked up a novelty home-aging barrel at a garage sale. She filled it with baijiu, and a year later, found it had turned into something like whiskey.

“My sister goes, ‘try this!'” remembers Ly. “I taste it. She says, ‘it’s 77% alcohol.’ It didn’t taste like it—it was good!” They called the TTB and found that what they’d just made legally qualified as whiskey, and a new branch of the business was born.

The process of actually making this whiskey, though, differs substantially from how western-style whiskeys are made. Baijiu uses a fermentation starter called qu (pronounced “chew” in English), a dried, storable solid containing yeasts and other fungi, as well as the metabolic enzymes needed to convert starch into sugar. At Vinn, the qu is made with rice flour, a handful of herbs and spices, and a dose of the last batch of qu—not unlike a sourdough starter.

After the rice is cooked—brown calrose rice for the baijiu, white for the whiskey—the qu is crumbled up into the mash. Fermentation, using this method, is typically at least a month long, and as long as six. That’s substantially longer than a typical whiskey fermentation. The whiskey is then double-pot-distilled and put in new American oak barrels with varying char levels.

Unsurprisingly, this whiskey, which I got the chance to review a few months ago, is definitely unique, although I also found it quite approachable. Here’s what I wrote in my tasting notes at the time:

Nose: This whiskey is different from the first sniff, and I can’t immediately place what I’m picking up. I definitely get honey, but it comes alongside something chemical and funky. I am, in fact, reminded of baijiu. There’s an earthy fermentedness here—aged gouda?—as well as a wholesome toasted-oat graininess. I also get a rich stone fruit note, like cooked peaches.

Palate: Mouth-coating and slightly oily, with the flavor balance leaning more towards grain. It’s almost floral on the back of the palate. Some bitterness on the finish fades to rice pudding and confectioner’s sugar.

In Japan, there’s at least one rice-based whiskey being made for import to the US. Kikori (which we reviewed back in 2016) is a spirit that, like Vinn and Lo’s whiskeys, uses a different fermentation process than western whiskeys. Like Japanese shochu, Kikori is made with enzymes from a mold called koji. Yeast is then added in a second step. Kikori is aged three years in used bourbon and sherry casks.

These unique spirits raise some interesting questions about how we define the whiskey category. Legally, all of these are considered whiskeys in the US—but do they taste like whiskey? With Kikori, specifically, some have raised the objection that this spirit could just as well be sold as barrel-aged shochu, and the “whiskey” label is a marketing ploy.

American whiskey, though, has always been a product of the American melting pot, cooked up by immigrants adapting recipes brought from home to local ingredients and conditions. Vinn, Lo, and Riz, all of which represent the marriage of various traditions, are no exception.

11
Shares
1.4k
Views
Share on FacebookShare on TwitterGet Our Newsletter
Cheers to the Dads! Personalize a bottle of his favorite whiskey to create a modern gift for the modern man. Use code: FATHERSDAY20 for $20 off your next order of $100 or more at ReserveBar