Half Of The Price of Your Whiskey Could Be Tax

Whiskey and taxes have a long, intimate relationship. The very first tax levied by the nascent United States federal government way back in 1791 was a tax on whiskey, and it was met with an ire so vitriolic the feds ended up marching on their own citizens to put down the Whiskey Rebellion.

Outside of North America, taxation’s vagaries shaped the other distilling industries, right down to the flavor of their spirit. Irish distillers, for instance, began using a portion of unmalted grain in their whiskey in response to a tax on malt, resulting in the distinctive pot still style that’s still produced today. Over in Scotland, taxation schemes have shifted dramatically over the years, sometimes incentivizing producers to strive for scale, and other times rewarding those who maintained small stills.

Today, your whiskey is taxed at two levels: federal and state. Federal excise tax on distilled spirits is currently $13.50 per proof gallon (one gallon of spirit at 100 proof at 60 degrees Fahrenheit). That’s significantly higher than the rate at which beer and wine is taxed on a per-drink basis.

But that’s just part of the story. States levy their own taxes on top of the federal tax, and the range of rates is enormous. At the bottom are Wyoming and New Hampshire, which charge no state excise taxes. At the top of the scale is Washington State, in which each proof gallon is subject to a whopping $35.22 tax. That means up to 50% of your cost at the checkout counter could be going to state and federal taxes. If you’re interested in seeing how your state ranks, check out this map, courtesy of the Tax Foundation: 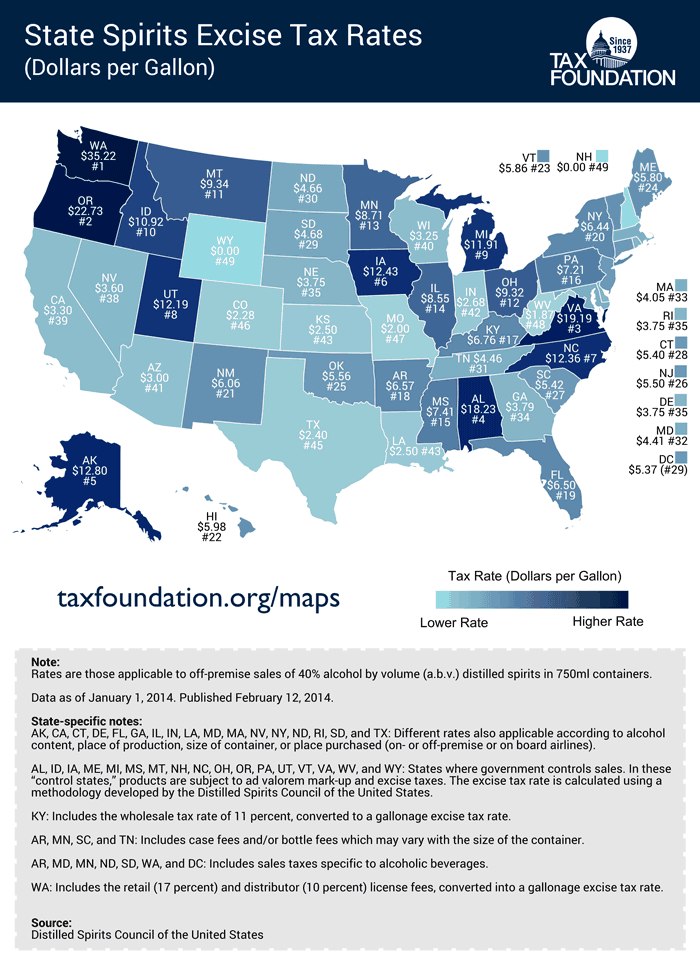 Currently, spirits are taxed in exactly the same way, no matter if they were made by Jim Beam or that mom-and-pop shop down the street. Brewers and winemakers, on the other hand, get a price break if they’re a small business.

According to the American Craft Spirits Association, craft spirits producers pay 80% more in federal excise tax than their compatriots in the craft brewing and winemaking industries, leading the trade organization to make tax reform their signature legislative focus. If they succeed, craft whiskey producers can hold on to a little more of their hard-earned cash, and we might even pay a little less for our favorite tipples.