Ah, whisky. Usquebae, usquebaugh, usquaebach, uisge beatha, aquavitae – all these Gaelic and Latin words associated with whisky translate to ‘water of life.’ It’s a fitting name for that precious elixir we all love, and perhaps even more fitting for the name of a whisky event that raises money for a charity that fights to save lives.

A few years ago, Dr. Matthew Lurin, an emergency medicine physician and whisky enthusiast in New York City, decided to create his own whisky event: Water of Life. “My friends knew I could throw a good party, and encouraged me, “ says Lurin. “A few of us sat down over whiskies and cigars, trying to come up with a new show that we all would love to attend. At its onset this was something that I wanted to be fun for everyone involved, and since I already had a full time job, I did not want to do this for my own profit.”

“My Scottish stepfather who introduced me to Scotch was diagnosed with a rare cancer, GIST [gastrointestinal stromal tumors], and I thought, what better use of the money raised than to fund research and raise awareness? I reached out to charities that already were involved in the fight against GIST, and for the first two years we paired with the Life Raft Group. Now, in our third year, we are working with the Gist Cancer Awareness Foundation. While we may not be a traditional charity format, I am not opposed to incorporating aspects of other events (we do have gourmet food for example). I wanted our event to stand out from the crowd, and so I focused on creating a unique and quite special whisky event. Over each year, we have grown and learned, and continue to be a work in progress.” 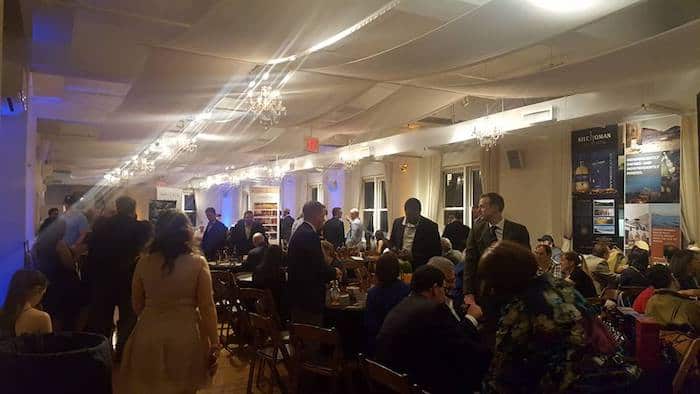 As many can attest, most whisky events consist of wandering up and down aisles of booths represented by brands pouring out measured selections of their lineup. They do this while attempting to provide sufficient information about what’s being poured as other eager attendees shove sticky glasses in their way, demanding to know which bottles on the table are the rarest or most expensive.

Lurin, a seasoned whisky event attendee knew he had to offer something unique to the experience. “The one problem a few of my friends have with some other whisky shows is that they have gotten so popular that its difficult to get the attention of the ambassadors to ask questions, and often folks are elbowed and  pushed away from their desired pours. It reminds me of the old Yogi Berra quote, ‘That place has gotten so crowded that no one goes there anymore.’”

So while there is a thirsty crowd, no one at Water of Life is elbowing each other out of the way – as there are no booths per se. Instead, attendees are each assigned an appointed time to sit at a table with a brand ambassador and taste through as much as they care to of a lineup, all calm and civilized like, until it’s time to move on to the next table. In effect, it’s speed dating with whisky.

“The speed dating format was an essential part of making us different. I had seen the term ‘whisky speed dating’ at a great tasting in Las Vegas, the Nth. This was just one part of multi day event, and included a handful of ambassadors and guests. Immediately my mind started imagining a larger event with several brands and a much larger number of guests all going on their simultaneous dates. A night with hundreds of mini-master classes seemed both ambitious and cool, and our format was born. The term whisky speed dating is a bit tongue in cheek, but since I have always thought part of the reason I go to whisky shows was to learn of potential whisky loves, it actually makes sense. And the fact that each table has unique snacks to pair with their whiskies make the event that much more special.”

Nth founder Mahesh Patel gave Lurin his full consent to use that idea for his own event. It’s a format that’s worked well so far. “Since I wanted to create a show that people who love whisky would want to attend, I have tried to keep the size manageable while continuing to grow,” says Lurin. The nice thing about our format is that we can keep expanding, yet never get overcrowded as we will always keep the ratio of tables to guests at a comfortable level.”

In its third year, the event is progressing to include more American whiskey, and now there is a separate night for those who can afford to pay a higher entry fee for pricier and more rare selections. “Our first year we had 21 tables, and one was dedicated to American Whiskey. Last year we grew to 30 tables and added a special focus on American Whiskeys. We also had a special room for Ultra VIPs to enjoy premium whiskies never before poured at a New York event. This year we are looking to expand to 50 tables, while keeping our American Whiskey Trail option, adding a focus on Scottish Island Whiskies, and the Ultra VIP event now has its own night, so that they will be able to both enjoy the special whiskies in their own event and then join in the fun on their dates on the main night.”

The event space has changed to accommodate a larger crowd, and this venue change also allows for other creative ways to enjoy whisky. Says Lurin, “This year we will be in the incredible IAC Lobby, and have some amazing plans to take full use of the video screens. Ever want to walk through a Scottish distillery, but unable to do so? Maybe you will get a chance at a VR experience. And if not, at least you will get to watch, and drink some wonderful drams. And don’t forget to make your way outside for our live blues band straight from Scotland for your listening pleasure during your dinner break or cigar hour!”

As for the whisky itself, there’s a lot to look forward to. “We have added several American whiskeys, Indian whiskies, Japanese whiskies, Irish whiskies and several Scotches that we have been recruiting for the past few years. New brands, such as Balcones, Glendronach, BenRiach, Glenglassaugh, Paul John, Glen Scotia and Loch Lomond are so excited to join the family that they were among the first brands to sign up for our third edition.” For WOL veterans who might have missed a few drams last year, fear not. Adds Lurin, “As it stands now, it looks like everyone from our prior events are looking forward to returning, with some taking additional tables to promote new whiskies. It’s going to be quite special. One thing I love about the show is that we have the world’s best known brands, as well as many smaller, lesser known wonderful ones, so that there is something for everyone.”

Aside from the speed dating, master classes, and the potential of some high tech whisky imbibing experiences, there are other aspects of the evening everyone looks forward to. The event concludes with a lively auction and raffle that includes some extremely rare bottles donated from private collections. Also, throughout the night, one is bound to run into a friendly soul sharing wee bits of fine nectar that isn’t on the tables.

Lurin has been pretty impressed with the unique offerings people bring to WOL. “We started last year’s show with a bourbon distilled in 1902, bottled in 1910, and followed that up with a whisky sold during Prohibition as medicine. At our first cigar hour, one of our ambassadors cracked out a bottle of 43 year old Glenglassaugh. Our Ultra VIPs were treated to a never released Dalmore Constellation Edition, straight from the cask that it was first placed into back in 1967, as well as a few Japanese whiskies that have never been seen on this side of the Pacific. We were the first event at which Glenmorangie debuted their travel editions, and somehow at our first show their 25 year old just ‘found its way’ onto the table. Lagavulin, Compass Box, the Macallan, Highland Park and Ardbeg also poured several of last year’s newest and most popular drams for the first time at our show. And from what I have heard we may see more of the same from several of the aforementioned brands as well as a few others. The raffle had a few bottles never released in the US, and some other unique prizes including a prescription for whiskey accompanied by an empty bottle from the Prohibition.”

As the event grows, so does the amount that can be donated to charity. “In our first year we just hoped not to lose so much money that we would not be able to have a second event, and in fact we made a couple thousand dollars in profit. Last year, we made close to $15,000, and this year we are hoping to raise over $25,000. Thanks to the generosity of our brands, our Ultra VIPs, and our Barrel and Copper Sponsors, we are well on our way.”

Drink whisky to fight cancer. If you’re in New York City on May 18th and love whisky, it is doubtful you have something better to do. For tickets and more information, please click here.

42
Shares
668
Views
Share on FacebookShare on TwitterGet Our Newsletter
Cheers to the Dads! Personalize a bottle of his favorite whiskey to create a modern gift for the modern man. Use code: FATHERSDAY20 for $20 off your next order of $100 or more at ReserveBar