Meet Mahesh Patel, The Whisk(e)y Collector You Wish You Could Be

Let’s face it – whether you think of yourself as a whiskey collector, or resent those who keep bottles locked away, there’s something to be said for having access to some of the rarer whiskies on the planet when you feel ready to crack one open to share with friends or celebrate a special milestone. Of course, it takes a good amount of personal capital and a strong knowledge of and appreciation for whisk(e)y in all its forms to undertake building a one-of-a-kind collection, and those are things Mahesh Patel has in spades.

Patel is well-known in collector’s circles as one who both understands, and has access to, some of the rarest whiskies out there. He grew up in an Ugandan-Indian family in the United Kingdom with little money, eventually getting a degree at a prestigious university. He came to the United States in the 1990s, and opened what later became a very successful construction/development company in Atlanta, Georgia. He became a collector and lover of whisk(e)y during this time as well, later making history when he bought back in October, 2010, what was at that point the world’s first most expensive whisky bottle: ‘The Dalmore Trinitas. It was valued at $165,000.

Today Patel is the founder of Universal Whisky Experience, a company focused on high-end whiskey experiences. He remains an avid collector, with a collection said to hold over 5,000 bottles and valued at perhaps as much as $10 million or more. He is thus one who knows a couple things about building a high quality personal whiskey stash. With this in mind we recently interviewed him about his story and tips on how to start your own hoard.

Note this interview is edited for brevity and clarity. 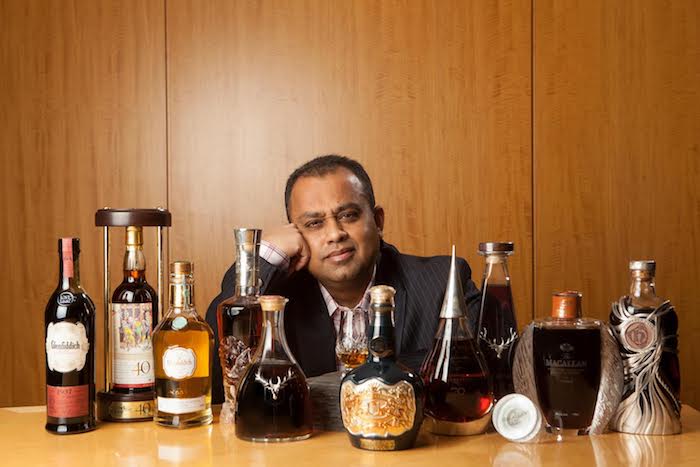 The Whiskey Wash: Mahesh, can you tell me a little bit about how you got into whisky collecting?

Mahesh Patel: When I was back in the UK growing up, we went up to Scotland for a family holiday. I was probably about 15-16. My dad liked whisky so we were driving around and he wanted to go see a distillery. I just got fascinated by the production, looking at the stills and everything at that age, and really started researching it, started to learn about whisky and single malt, how whisky was made, and all that kind of stuff. In this process, I started collecting little miniature bottles of whisky. It grew and grew, and when I went to university in the UK, I started seeing the 3 Glens, as I called it, which was Glenfiddich, Glenmorangie, and Glenlivet. I began enjoying these, learning more and exploring more, and starting to find out about other malts and blends.

After I graduated it was a real opener for me because that’s where I started seeing a lot of one-off productions, individual productions, limited runs. From there on I started just buying. My principle’s always been to buy two of everything, even at that age. Then I used to open one and enjoy and share with friends.

When I moved to the States I was traveling a lot more, and was probably one of the first people to attend some of the early whisky festivals, either over in the UK or elsewhere in the world. I started making friends around the world, and we would get together in groups and buy different whiskies and start sharing them and drinking them. It evolved from there, and eventually, as I was able to afford more of the rarer stuff, the collection just grew from there.

As I said, I’m always about opening up everything I own. I opened up one of the most expensive whiskies in the world in London last November, the Royal Salute Tribute to Honour at $250,000 a bottle. We cracked it open, and we had a great time. To me it’s also about having the whole history and the whole thing that goes with it. It’s not just drinking the bottle in a corner somewhere and forgetting about it. You’re learning about the product, learning about the people who are around it.

TWW: Are you mostly a Scotch guy or do you enjoy other categories of whisky as well?

Patel: I am equal opportunity so I do drink others. I love exploring whiskies and brown spirits in general, so I’m a fan of my bourbons and my rye, I like my Japanese, I like my Irish. I’m getting into some of these other whiskeys from other parts of the world. I’m enjoying some of the stuff from Australia. I try and explore and find new and new things to drink, as well. It’s not always about expensive, expensive doesn’t always mean it’s the greatest whiskey on the planet.

TWW: Ok, so you’re on a desert island and you can have one rare whisky and one common whisky, what are those two?

Patel: I want to say Highland Park 18, for sure, as the common one. For one rare whisky, I would really say the old 1964 Black Bowmore.

Patel: It’s the style of peat that I like, in the sense that very young peated whiskies, particularly Islay whiskies, tend to have a lot of that peatyness and a lot of sharpness to it. It’s just the way it is so delicate on the peat that you get so much out of that nice sweetness and mellowness, but you get the peaty smokiness coming out as well. I’ve always enjoyed those.

TWW: Let’s talk a little bit now about the act of collecting. When you’re looking at a bottle of whisky, what is it you think about when you think this might be something that’s a good collectible?

Patel: Well, good question, and I’ll probably answer it in two different ways. I’m answering as a collector/connoisseur, and I’m not going to answer as someone who is a investor. I don’t like that word being used in this category because there is an element coming in which is a paper investor that buys into these things and there’s no way you can make this into some kind of a stock market fund. A collector, yes, because anything that’s rare has an inherent appreciable value. I look at it from that angle, and from there what I’m looking for when I’m looking for something that’s going to be collectible, first and foremost, is that drinkability should be always there. The product must drink well, people must have liked it.

Now if someone is starting out into the category you can collect at all levels. You don’t have to be collecting at a super expensive level. I mentioned the Black Bowmore just now – when that first came out in the early ’90s it was relatively affordable and there was a lot of it. It drank really well, it got great ratings, and people were buying it and drinking it up. That bottle, today, if you can find it anywhere, it runs into the $8,000- 10,000 range. That’s appreciated really well.

As for some specific recommendations, if you look at the distillers editions from various distilleries, they are very affordable and very collectible. Another one in recent years was Glenfiddich, the Snow Phoenix, which has become highly collectible. Ardbeg does a lot of their limited production. You can find things like that.

Now changing from Scotch, let’s talk about bourbons and things like that. There’s great products out there. Yes, people always talk about the Pappy. Pappy’s Pappy, it’s great whisky, but it is up there in price. There are so many other limited production bourbons, so many different things that you can look for. They’ve got collectibility. Japanese, obviously, has shot out through the roof lately. Simply because I don’t think they’ve got enough production to be honest with you, so those have become very great to drink and hold back as collectible pieces.

Also, there’s a lot of micro-distilleries opening up right now, and I’m not going to say that everyone is turning out great whiskey yet, but there is a small percentage that is turning out some great product. You ought to look at buying some stuff from their earlier days that they came out with. Balcones, for example, did some good things, and there is a number of people who’ve popped up things like that. Look at maybe their first edition, first releases. That could be great value down the road simply because they were one of the original ones that came out.

TWW: For people who buy some whiskey that they want to hold onto, is there any advice to them on how to store it?  Also, what about how to keep up on what the value of it might be in the months and years down the line?

Patel: Storage is, when it comes to whiskey, not as tricky as say something like wine. I think you just keep it in a nice dark area, preferably away from sunlight and in some place that’s relatively cool. You also don’t really want to put it in something that’s too cool, either, or somewhere that’s too much humidity or something like that. It’s not going to damage the product if it’s sealed properly, but the problem is it will damage the packaging and things like that, which you don’t want to do from a collector’s angle. Keep your bottles vertical as well.

If you’ve got very expensive bottles then you’ve got a security angle you want to consider. If you’ve got too many don’t keep them all in one location. That’s simply because if something were to happen you just don’t want to have it all in one area. That’s important.

Around the bit about how to track – when I started out all of this stuff many, many years ago there wasn’t much information. Today there’s tons of information, and there’s probably over-information. One of the best things is just to look around, constantly search the web, look at retail prices, look at what’s going in an auction and check what is being sold. Keep a log of the pricing there – that’s the best way to do it.

There are people out there that have come out and created these indexes. I’m not a fan of those, I’ll be honest with you, because the index material is suspect. They’re getting their data from just auction houses. Just auction house data is skewed simply because an auction is only as good who is sitting at a specific auction. You and I, for example, might want to go for that bottle, so we can end up jacking up the price. Tomorrow, somebody doesn’t even want it.

Once you get into it you’re going to also start getting to know a lot of people so you can sort of talk around within the collecting community and find out who’s doing what and where. You want to get involved in that as well, to find out how prices are selling.