To those who told Will Arvin and Wes Murry they were crazy to try and reopen the Old Taylor Distilling Co. as Castle & Key … I hope you like crow.

Arvin, a real estate investor, and Murry, an attorney, have done what many thought impossible in restoring the historic distillery created in 1887 by Col. Edmund Haynes Taylor, Jr. The press got a look at the radical transformation one week before its September 19 opening to the public.

The distillery’s grandeur was unprecedented for its time, and its revitalization places it at least alongside Maker’s Mark for the title of most beautiful distillery in America. Its magnificent limestone castle of medieval design still stands sentinel alongside McCracken Pike in Millville, Ky., and its architectural accoutrement—a key-shaped peristyle supported by Roman columns around the campus’s aquifer and a sunken garden that’s a sure cover spot for landscaping magazines—harken back to a time when no one thought a thing about whiskey tourism. 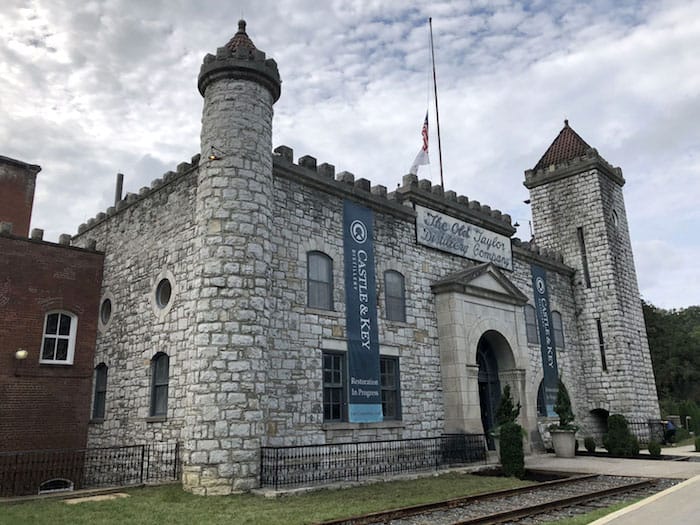 “We didn’t have a clue what we were getting into,” Murry says. “We were figuring it out as we went.”

Arvin and Murry wanted to create a micro-distillery with a tourism component in the historic setting. But since most of the buildings onsite were badly deteriorated, and the grounds so overgrown with vines and trees, they knew they had to do more to spiff up the whole place.

The neglect of the Taylor property began in 1972, when National Distillers stopped producing whiskey. They kept its bottling lines running and continued aging whiskey in its massive warehouses, but after selling the property to Jim Beam in 1987, the entire plant was idled.

“Every time we told people that’s what we wanted to do, they’d look at us and say, ‘Are you guys nuts?’” Arvin says.

When the two men bought the property in 2014 for just shy of a million dollars, they invited famed landscape designer Jon Carloftis to join them for a tour. Carloftis, speaking at the media event, recalls thinking, “You’ll need a machete to get in there!” 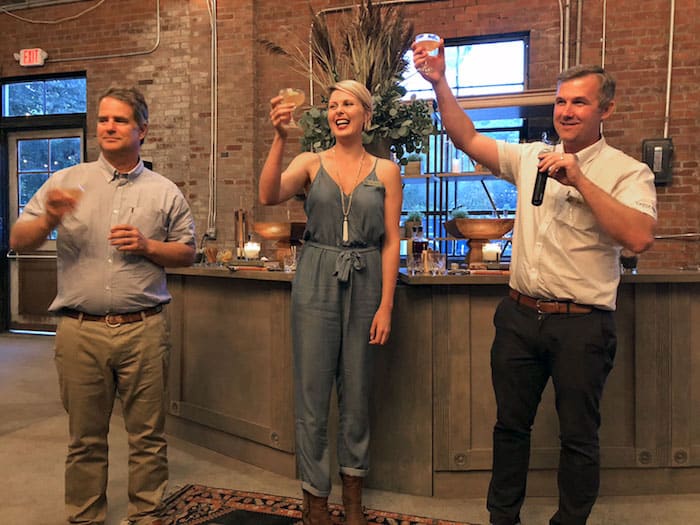 The men soon realized their vision for the distillery wasn’t ambitious enough to pay its bills for the long term. After naming it Castle & Key Distillery, they ordered a 24-inch-column still and doubler set, plus a still and a pair of botanicals baskets for vodka and gin production. Then they hired Marianne Eaves as their master distiller. Eaves was then Brown-Forman’s master taster and first in line to succeed her boss, Chris Morris, as master distiller. The decision to leave wasn’t easy, she says.

“You work for a great company like Brown-Forman and you walk away from the chance to be master distiller there some day?” Eaves said to me shortly after her appointment to Castle & Key in 2015. “I know that sounds crazy to some people, but I just felt good about what Will and Wes were planning and wanted to be a part of it. I wanted to be in on starting something.”

Castle & Key needed cash, so its owners began renting out its vast warehousing capacity to other brands lacking barrel space. With a still running, they solicited clients for contract spirits production. When that portion of the business grew rapidly, they added a 32-inch column still beside the original.

Meanwhile, Carloftis transformed the grounds, removing dump truckloads of trees and vines and other vegetation and replacing that with a mix of modern and Taylor-period-correct plants. Carloftis even talked Arvin and Murry into converting parts of the grounds to nature paths for visitors to stroll.

When Carloftis was asked to comment on the overhaul during the pre-opening press event, the typically loquacious landscaper struggled for descriptors.

“You can’t oversell this place when you tell people about it,” he says. “It gives me the shivers to look at it …  to see what’s been done here. The courage it took for you guys to do this … everything here is the best.”

Outside of its modern distilling (3 million proof gallon capacity) and bottling systems, the restoration returned most of the site to its peak grandeur in 1937, when ND bought it from the American Medicinal Spirits Co. All 15 fermenters from the late 1930s are back in use, and both its warehouses are fully functional. Its massive water tower, though not in use, remains, as do the hulking brick and cast-iron guts of a coal fired boiler system that’s now a centerpiece of its visitors center. 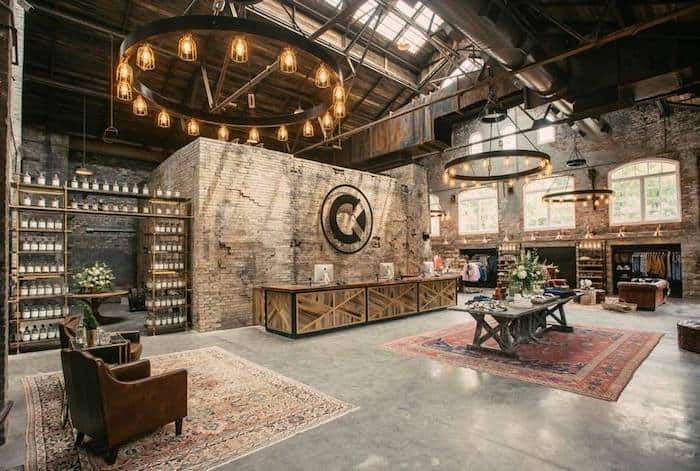 For now, the only spirits you can get are vodka and gin, both of which are made from the distillery’s rye whiskey mashbill. The gin is exceptionally fragrant and soft even at 106 proof; the vodka, unlike most vodkas, is quite good sipped neat.

At roughly 18 months old Eaves’ rye bourbon and wheat bourbon won’t be bottled until at least 2021. Her straight rye may be released in 2019, but she’s not guaranteeing anything.

“We’re not rushing it,” she says. “We’ve taken our time with everything else, so why rush the most important things?”

Some key details on the forthcoming whiskey: