Technically it’s fall, but it’s still in the 90s here in Bourbon Country. We get to enjoy summer a little bit longer than most folks, and the great thing about that is your bourbon is spending more time expanding into the charred oak barrel right now, giving it all of those wonderful vanilla and caramel notes that will be extracted when the air cools and the bourbon retreats from its summer home. It’s too hot to do much of anything in the evenings other than sitting on the front porch with a cigar and a flight of bourbon watching the world, and the ice cream man, go by.

As always, I recommend pairing your cigar with a flight of bourbons with varying mash bills, but try to keep it 100 proof and under. Keep notes about what changes as you sip and smoke – this will help you understand how to best pair your bourbons and cigars going forward. 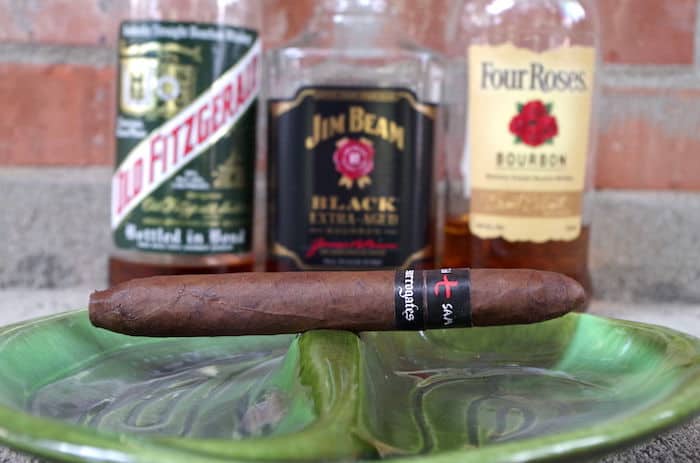 For this month I chose a Surrogates 7th Sam by L’Atelier. This cigar is made at the My Father factory in Esteli, Nicaragua. It has only been out since August. This particular blend only comes in one size – a perfecto that is 6 ¾ and a 48-52 ring gauge from head to foot. The blend is unique in that there are seven different types of tobacco, hence the name 7th Sam.

According to Cigar Aficionado, this cigar is “Wrapped in a dark, Ecuadoran Sumatra wrapper, 7th Sam features two Nicaraguan binders and a three-country filler mix of tobaccos from the United States, Mexico and Nicaragua. According to Dan Welsh of L’Atelier Imports, the seed varietals in 7th Sam include Criollo ’98, Corojo ’99, Habano and Sancti Spiritus (all grown in Nicaragua by the Garcia family); Connecticut broadleaf; San Andrés from Mexico; and Sumatra from Ecuador.”

There’s a great deal of pepper spice upon lighting as well as hints of cocoa and coffee with a faint mineral finish. Even though I lit it unevenly the cigar recovered and had a nice even burn. The cigar retails at $11 per stick.

Together: The smoke brings out baking spice and citrus in the bourbon. The bourbon dulls the spice of the smoke and brings the coffee notes to the forefront.

Together: The smoke brings out sweet honey and vanilla flowers in the bourbon. The bourbon brings out cocoa notes and minerality in the smoke.

This lineup was the perfect demonstration of why you should always pair your cigar with a flight rather than just one bourbon at a time. The Old Fitzgerald Bonded was a surprisingly spicy combination for a wheater – typically you think of spice coming from rye, but it can also come from other sources. The Beam Black was a very sweet combination, which some people do enjoy. The Four Roses Yellow Label was the most balanced of the three, and since that’s what I’m after that is my first choice. But all of these were great pairings, so it’s up to you to find the combination that works best for your palate.