Oh No, Prices Are Going Up! Hurray!

“We are excited to be able to offer something so unique and rare for our most devoted fans,” said Julian Van Winkle, distillery president, at the time of release. The whiskey was distilled at Stitzel-Weller in 1989, aged on low-level warehouse floors there and at Buffalo Trace, and dumped to stainless in 2014. It is unquestionably rare – any 25 year old bourbon is, a drinkable 25 year old even more so – and as time moves on, bourbon distilled at Stitzel-Weller before they closed in 1992 only becomes more rare. 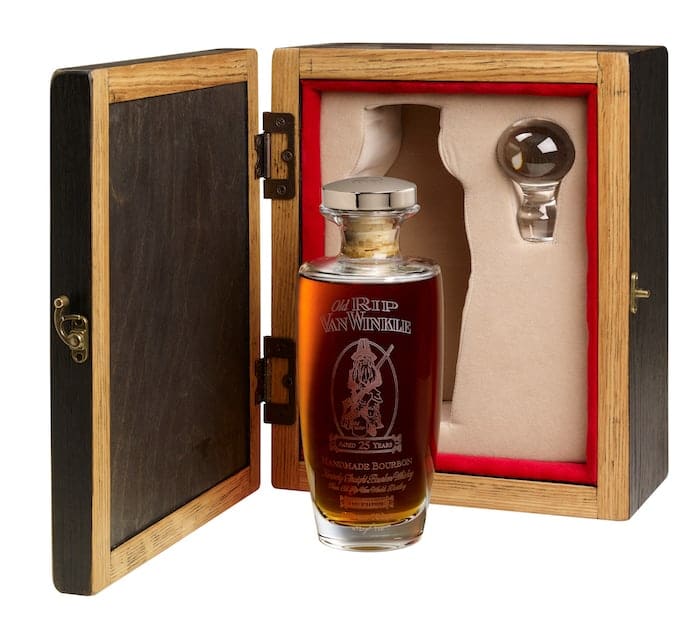 Second: A handful of stores have already advertised this whiskey for sale, at an asking price of around $15,000, an 833% increase over the list price.

My reaction on seeing this amazing announcement was cynically swift and simple: ‘And they’ll get it,’ I thought.

It’s not just Van Winkle, though that’s completely seized the minds of money-laden whiskey noobs. It’s the idea of whiskey as an “investment.” There are bottles that never even touch their buyer’s hands; they just sit at the auction house, appreciating in value. A year later, new auction, cha-ching!

The attraction is compelling. I just read today that someone bought a full set of the Glenfarclas Family Casks when they first came out ten years ago, paying £6,500. Today that set is being quoted at £100,000, a nice round number. That’s a compound annual growth rate of 31.42%. (Wish I’d bought five sets back then, but I’d probably just have empty bottles now.)

Well, I think it is. But then there’s this.

Third: Prices for Japanese whisky continue to break records. Prices for rare Scotch whiskies continue to climb, if not quite at the precipitous rates as before. Bourbon prices are not increasing incrementally anymore; Booker’s doubled, then pulled back to a mere 50% increase. We keep expecting to see some results from the large expansions in distilling capacity in the industry over the past ten years, but it does take time, and the demand continues to increase faster than supply. A freshman Biz major could tell you what that means: rising prices.

But that’s not all of it. Every time a bourbon like this 25 year old unicorn comes out, with a gasp-worthy price tag – and sells for that price or higher – there’s an inexorable tug upward on every tier of the category. I watched it happen over the past 20 years in Scotch whisky, and now it’s happening in bourbon.

I was in Kentucky two weeks ago, and prices are higher, and some old value favorites are simply gone; presumably because the distillers realized that they could make much more money by putting those barrels into the higher-priced blending. I was still able to find good bourbon for well under $20 a bottle, but the choices were much more narrow. The golden age of bourbon bargains is finally disappearing.

Every time one of these monster bottles sells (and yeah, every time one of you guys goes out and buys every single bottle of Booker’s in the store – or the area! – because you heard the price was going up), that’s more gas into the balloon of prices. And there’s nothing to do about it.

That’s because if you don’t buy it, someone else will. That’s where we are. We’re not in our little group of in-the-know people anymore. Everyone knows now, and everyone wants it. Get used to this, because Scotch drinkers did about five years ago. If you like Canadian, you’ve got about five years left.

But here’s the beautiful thing! Whiskey was a stone cold bargain in the 1990s, sure, but it was because the companies were barely staying open. They were running on inertia, on a glide path to obsolescence. We could have that…or we could pay what the stuff’s worth, and think about the fantastic breadth of choices coming as new places open – New Riff, Castle & Key, Lux Row, Bulleit, O.Z. Tyler, Angel’s Envy, Michter’s, Willett, and that’s only some of the big ones – and the old ones expand and experiment.

Yeah, folks. This may not be the golden age anymore, but it’s definitely silver. Let’s enjoy it, and show the new chums how it works. Be generous, and be joyful. We’re drinking whiskey; how bad can it be?