In 2009, the final remnants of a storied bourbon were rebottled into expensive display decanters, hitting the market at $1,500 each. Keep in mind that was retail pricing. Even today, the retail price of Pappy Van Winkle’s Family Reserve Bourbon 23 Year Old is $249.99 before it explodes on the secondary market. So what in the world was that $1,500 bourbon?

It’s the A.H. Hirsch Reserve 16 Year Old, a whiskey with a uniquely convoluted history, and an unlikely journey towards skyrocketing value. The bourbon’s story has been explored before, with Chuck Cowdery writing the book on the subject, literally: The Best Bourbon You’ll Never Taste.

That was four years ago though, so it was time to check in on the A.H. Hirsch Reserve 16 Year Old again. The bourbon’s value certainly hasn’t decreased, that’s for sure. It’s currently sitting at number 4 on a list of the most expensive bourbon based on average online pricing, selling for over $2,700. And yes, that’s right above the Pappy 23. 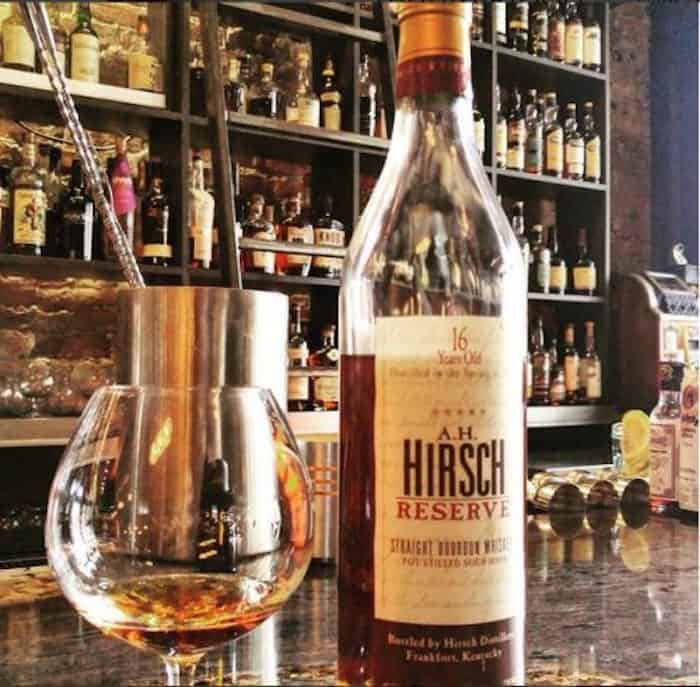 The Creation of A.H. Hirsch Reserve

Cowdery explores the history and creation of the bourbon in greater depth and detail than is possible here. A quick summation offers that the bourbon was distilled in early 1974, at what would eventually be known as the Michter’s Distillery near Schaefferstown, Pennsylvania. Adolph Hirsch commissioned the whiskey in a single 400-barrel batch. It was the standard bourbon recipe used at the distillery by master distiller Dick Stoll, who learned it, and his trade, under Everett Beam. The bourbon had a mash bill of 75% corn, 13% rye, and 12% malted barley.

When the distillery faced bankruptcy, this bourbon, which had already been aged for far longer than was standard or typical, had never been put to use. Gordon Hue acquired it in 1989, and had Julian Van Winkle III bottle the brand — A.H. Hirsch Reserve.

A number of different ages were released, with the first bottling of a 16 Year Old being in 1991. The labels from this edition will say bottled in Lawrenceburg, Kentucky, and are known as the “blue wax” A.H. Hirsch, whereas the 2003 bottling says Frankfort, Kentucky, and is known as the “gold foil” bottling.

Hue maintained ownership of the brand, selling it from his own store and largely to the Japanese market. Henry Preiss of Preiss Imports then eventually acquired the brand, and was responsible for the “gold foil” release and the decanter bottling which followed. Through another series of transactions, Preiss Imports would eventually become a piece of Anchor Brewers & Distillers, and today, Anchor still has a “Hirsch” whiskey in its portfolio, although it’s not “A.H. Hirsch” and is by no means the same juice.

What Explains Its Popularity and Value?

This intricate web of ownership and control over the brand is part of what makes A.H. Hirsch Reserve noteworthy. “It was a serendipity in the sense that a lot of people that didn’t necessarily have anything to do with each other came together and created it and nobody actually set out to make it what it became,” said Cowdery in a recent conversation. “It was just some bourbon that they made, but the fact that the guy that they made it for didn’t really have anything to do with it was why it sat for so long.”

Preiss knew he was getting great whiskey, but even he couldn’t have foreseen the craze that would follow. “We knew the quality because we handled the whisky long before buying the brand,” said Preiss. “We built the brand, had we not committed to buying the brand Sazerac would have bought it.”

Sazerac was intimately aware of A.H. Hirsch in part because Julian Van Winkle was responsible for bottling the brand. In 2003 when Sazerac acquired the Pappy lineup, bottling for Hirsch also moved to Buffalo Trace — hence the shift on the labels to Frankfort. It’s at this stage that Preiss moved to get the brand for his portfolio.

“It’s worth mentioning my then sales manger pushed me to contact the Hue family and get the distribution rights for A.H. Hirsch Reserve,” Preiss said. “Steve always had a nose for great product…I was blessed with an amazing team of people surrounding me and each and everyone had a piece of creating the history.”

Beyond that, Cowdery also credits the mystique of A.H. Hirsch in part to the nascent days of the internet enthusiast community. “It really became a phenomenon almost exclusively through the community, not through any marketing,” he says. “I think that’s one of the interesting things about it.”

With the enthusiast community clamoring for it, soaring growth for A.H. Hirsch ensued. “From the time we started selling Hirsch it just grew and grew in interest and intensity,” said Preiss. “It was truly a dream brand.”

That type of word of mouth popularity and snowballing effect can’t be controlled. “You don’t create brands like this, they evolve in a viral fashion and need to be managed,” said Preiss. “As always the right timing is essential.”

As for the rebottling into the decanter, Preiss decided he wanted to do something special with the last bit of inventory which he had available. “It was an idea I had for the small remaining inventory I had bottled in European 700ml [bottles],” he said.

“I decided I didn’t want to ship the last inventory to Europe and with some begging Buffalo Trace finally agreed to dump these bottles. We then shipped it all to Willett where they bottled the hand-blown bottles I imported from France… It was my last vision and hurrah for the slice of American history A.H. Hirsch Reserve occupied.”

As a side note, also interesting is the involvement of the Van Winkles with A.H. Hirsch Reserve, predating the even more high-profile and long-lasting fervor which still persists around the Pappy portfolio. “Julian and his partners at Sazerac rightfully own their frenzy but we set the standard for what American whiskey is worth,” said Preiss. “And that will remain iconic because it was the first bourbon valued this way.” 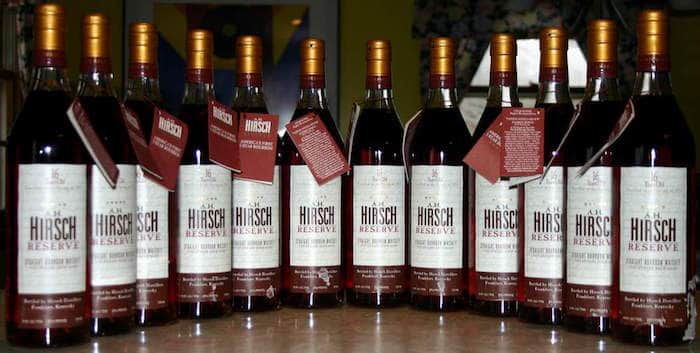 In his book, Cowdery calls the bourbon one of the “best whiskeys I’ve ever tasted.” Does he hold firm to that opinion today?

“I do, I do,” he said. “I just think it was a really good whiskey, it was bottled at the right time. It was taken care of properly, it was handled properly. I think that’s probably something that Julian [Van Winkle] does deserve some credit for.”

Surely, no myth or legend or circumstance could make a whiskey such a hot commodity unless it was something special to taste. So let’s go a step further to see what it does actually taste like, and whether there’s any way for it to live up to that kind of hype and price.

Living in the Washington, D.C. area, I know that if I ever need to track down a whiskey, Jack Rose Dining Saloon is the place to visit. They have 2,400 bottles in their ever-expanding lineup of whiskeys, and sure enough they did have A.H. Hirsch. In fact, they had both the blue wax and the gold foil bottlings.

The bottle was removed from a locked case of premium offerings which Jack Rose has on display behind its main bar. A dram was carefully measured and poured, left on the bar in front of me to open up in the air for a moment.

Leaning in to explore the bourbon, the nose revealed rich sweetness, with vanilla and caramel, along with oak and spice. The palate opened softer than anticipated given that sweet nose, before revealing rich toffee and more vanilla towards the back palate. A moderate finish had no burn and continued to build, with dry oak, char, baking spices and black pepper.

It’s smooth and easy, but also complex and layered. Certainly an “A” grade bourbon. Is it one of the best whiskeys I’ve ever had? Well… no. It wasn’t even the best bourbon I had that week, having been exceedingly impressed after sampling the new Knob Creek 2001 Limited Edition a few days prior.

In a blind tasting of A.H. Hirsch Reserve 16, without knowing the story, the background and the price tag, you wouldn’t guess it’s prestige. But that story and background add to the pleasure of trying a rare dram such as this, turning the process not merely into a tasting, but an entire experience.

In a way, Cowdery’s telling of the tale both adds to the bourbon’s mystique while also informing on it. “I think the thing about the legend if you want to call it that, the story, the history, the fact that somebody wrote a book about it, I think it adds to the enjoyment,” said Cowdery. “It obviously doesn’t change what it tastes like. It just gives you something else to appreciate it, and certainly that’s part of the experience.”

Jake Emen is a freelance writer based in San Diego, and a lover of all types of whiskey. He's passionate about food, drink and travel, and lucky enough to write on such topics as he explores both newly burgeoning regions around the United States, and others across the globe. For...