The Impact Of Small Rye Grain

Both Canadian and American history have known rye dominated mash bills for quite some time. One of the experts that is consulted on a regular basis in Europe by Scottish distillers is Patrick van Zuidam (Zuidam Distillers BV) from The Netherlands.

‘It’s the world upside down’, Patrick says. ‘Rye whisky is being made by say about seven Scottish distillers right now. This was unheard of 10 years ago’. At the location of Zuidam’s new planned distillery 42 hectares (103 acres) of grain is grown for the production of whisky and genever. Due to the dry weather the yield of our rye harvest was great last year, which sounds strange. A lot of farmers are very willing to grow barley, rye or corn after they have grown potatoes and sugar beets. Grass is not very profitable.

Rye has always been grown in Holland because it is an easy grain to grow with very low requirement concerning nutrients, water and other variables. So, it was perfect to grow where other crops struggled on some of the poor sandy soils we have around parts of Holland. But rye is an old-fashioned grain and grows to 4-foot-high which makes it an unpredictable grain to grow because wind could easily blow it over and that ruins the crop’.

Patrick picks a bottle of Millstone 100 Rye from the shelf. ‘This is a 100% rye mashbill I made 12 years ago. Is this the best rye whisky I ever made so far? No, I don’t think so; that will be the whisky I barreled yesterday. Eagerness and perseverance is what you need when you want progress in any field. It’s hard to put your finger on every element along the line of whisky making. It is definitely science, but it also takes experience and something difficult to quantify, call it a touch’. 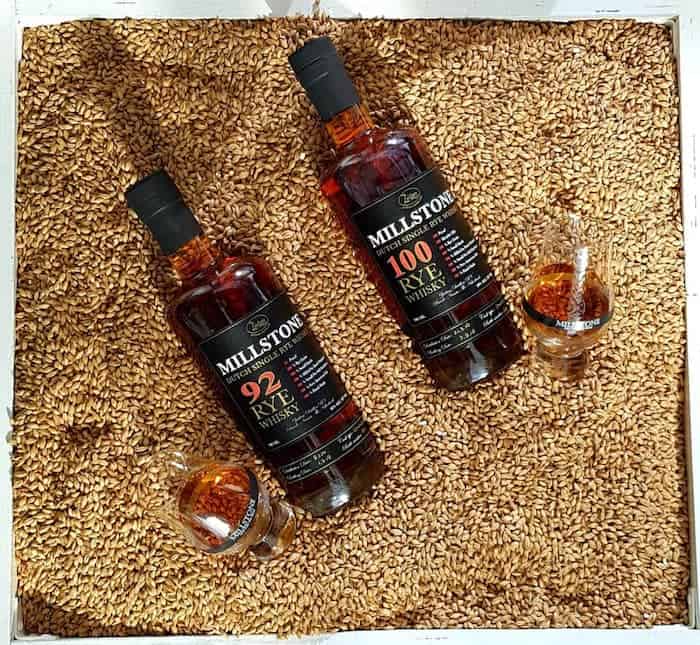 Some of the Zuidam whiskies (image via Zuidam)

Rye got itself a bad name throughout the ages. It is sensitive to contamination called ergot. Ergot of rye is a plant disease that is caused by the fungus Claviceps purpurea. The fungus produces many complex compounds including poisonous alkaloids and hallucinogens like LSD which affect the nervous system causing convulsive symptoms and hallucinations in people. These unknown symptoms may have been the source of accusations of bewitchment that spurred the Salem witch trials in the 17th century. These days this is not a concern anymore because all the grain grown are constantly monitored for all kinds of compounds including pesticides and mycotoxins from fungi.

‘We are in the middle of the food industry and therefore the grains we work with are meticulously checked on pesticides and micro toxins. Grain varieties that we grow are selected for flavor but also for resistance to lodging and wet conditions. We work with grains that are resistant to wet circumstances. For us this is far more important than yield. Growing conditions influenced the yield of 2018. It was extremely dry early in the season and we had a dramatic yield of 4 to 4.5 tons per hectare (2.5 acres). But the flavor though was awesome and super concentrated. This year we’re back on our average level of 6 tons’.

Patrick continues. ‘A top quality end product requires top quality grains. This has to do with terroir, a subject heavily debated in the whisky industry. I really believe that the taste of my whisky can directly be traced back to the type and variety of grain you use and the way you grow your grain. The example was there last year: a low yield and a small grain resulted in a powerful taste that was unbelievably concentrated and intense. The impact on the taste in my spirit was dramatic, almost beyond believe. Now, it is interesting for us to find out how to manage this process and influence taste. Do we plant our grains more closely together or do we have to alter our way of fertilizing?’

Zuidam Distillers only started growing its own grain 5 years ago and is closely examining the elements that influence the growth of their grains. All aspects are taken into account: fertilization, seeding density, soil composition or humidity factors. ‘More and more farmers use GPS (Global Positioning System) to influence their actions. What we are learning now is how we can grow small grains and keep this intense taste.’

‘Terroir does exist in distilling; it’s is undebatable for me. The challenge lies in separating true terroir from other factors that influence the flavor of the whisky. Terroir for me should be repeatable year after year. It is unique to our soil and stands out from the chance of  environmental influences that affects our crops year after year like the amount of rain and sunshine. Simply saying that the grain for this plot tastes differently from the grain from that plot does not prove terroir for me. It should be a quality of the grain from that plot has every year. A further complicating factor is  the influences in the rest of the distilling process. Of course our yeast does influence the taste during fermentation. And also the temperature at which I mash in my grain, fermentation temperature, rate of distillation (speed), cut points, cask filling strength, cask type, etc. Most of those we control rigorously.’

An element of taste.

Zuidam Distillers grow different grains and they look at standard varieties but also at new and old varieties ‘Yes, we do experiment with other grains than Concerto, Odyssey, Laureate and Optic (barley strains). For rye we work with Antoninski and more recently with KWS Sassy. We also look at grains beyond the industry standard ones (rye, corn, wheat and barley). One we are also looking at is Teff, which is also a type of grain that is very popular in Africa. We have to look ahead because solutions never come fast. Most experiments focus on our yield and whatever happens in our mash tuns. So, how much alcohol does it bring me ? Concerto yields 420 ml of alcohol; Golden Promise 285 to 320. That’s why we work closely together with Wageningen University & Research. Those people don’t discuss taste, they talk yield. You know, when the starch increases in your grain, the ratio cuff/starch changes as well. We all know this effects the taste, but which element precisely is due to this effect ?’.

One type of rye is sown each year by Zuidam Distillers and the focus is always on taste. ‘This year we’ve sown in 27 hectares of rye. I use about 1 kilo of rye per bottle. So most of the grain is not the determining factor. It is not very interesting if my price is 25 cents higher per bottle. When it comes to the cost of the final product I am more concerned with heating costs, working hours, etc. In the end it is the grain that counts, not the price. We are sowing Dankowski right now, a Polish rye. If you do 10 hectares it will yield about 40 tons at the least in a dry season’. 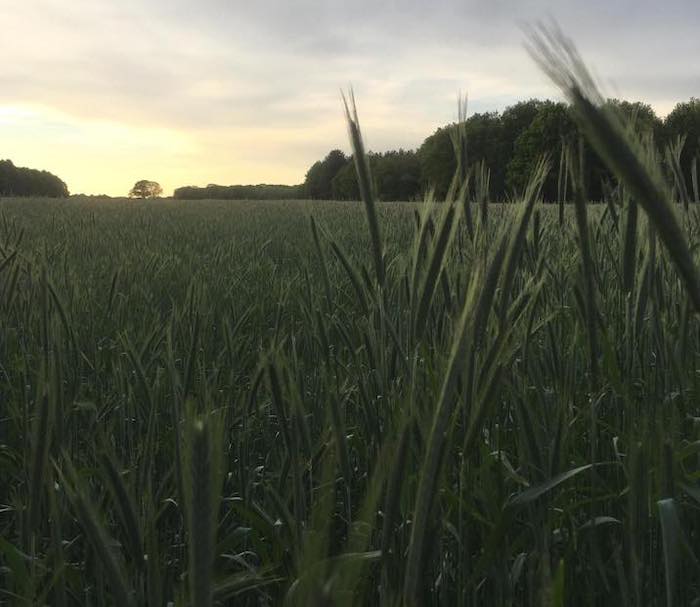 Some of the rye grown for Zuidam (image via Zuidam)

Of course Zuidam Distillers can argue about taste. But is this the final product they would like to have ? ‘Oh, yes, we’re more than satisfied with the results. But we always aim for the best. I really believe in terroir. And that’s why we want to grow all our own grains within now and five years. We really want to determine our own course and future. It’s more than just a commercial thing; it’s our philosophy. I would like to go one step further than my dear colleague Mark Reynier from Waterford Distillery. He truly believes in recognizing plot A from plot B. With all due respect but it’s more than that, it’s also about the repetitive effect. Terroir should not be a physiological hit. And make no mistake, this is just part of the end product. Other indicators are the mashing, fermentation, distillation and wood maturation. Even the lacto bacillus pressure within the distillery is of importance. What kind of lacto acid bacterium is present in my distillery and what do I allow in my mashbill ? Is there any necessity to sterilize my production area ? And do I really want all those live yeasts ? All the answers to these questions have to do with terroir’.

Distilling a rye mash bill is a tedious job. ‘Those beta glucans are the problem of distilling rye. The proteins thicken the mash and give it a slimy consistency. These properties make it more difficult to mash in rye. We cannot mash in as much grain per 10,000 liter mash as we would if we distill from corn or wheat. That means a less high gravity for the distiller’s beer and more energy and water used per liter of whisky. So a higher cost per liter and less yield per distillation’.

‘The moment we have 10,000 liters of distiller’s beer we pump it into the fermentation tank. But because of the beta glucans we won’t be able to lauter the rye distillate like we do with malt whisky. Therefore parts of grain will be left behind. All this makes it harder to ferment and distill. And there’s another element that cannot be overlooked.  A malt whisky makes a fluffy foam after fermentation, but when dealing with a rye mash bill – quite a pasty component  – these bubbles are far more harder to ‘break’. So, if the fermentation starts a bit too enthusiastic in our fermenter in our first night, the yeast will work too hard to eat all the sugars present and this creates loads of CO2 that creates bubbles and the chances that the tank will overflow in that case is very real. We solve this problem by rigorously controlling the temperature and keep it low for the first three days; that is below 20 degrees Celsius and turn it up slowly after that. You know, dealing with a rye mash bill is just like having sex: the first time it’s clumsy and you fumble around a lot and you even hit the floor now and then’.

While thinking about this quite interesting metaphor I hear Patrick suggest we should go and see the new barrel storage.