Israel, the land of milk and honey, sits in a region of the world not known for its intoxicants. In many parts of the Middle East, alcohol is banned or strictly controlled. But a new distillery in Tel Aviv is looking to create something new and different.

Milk and Honey (M&H) is Israel’s first whisky distillery, and the founders have quickly made it part of the city’s fabric, among entrepreneurs and innovators, makers and artisans. Tal Chotiner, Head of International Sales, said Milk and Honey was built with its hometown in mind, along with the beachfront, the lively markets and the architecture.

“From the very beginning, M&H was all about creating something new and different,” Chotiner said. “While we do respect the long-standing traditions of the whisky world, we were inspired by other New World distilleries making their own special path. Specifically, the work of the late Dr. Jim Swan in hot-climate distilleries like Kavalan and Amrut … it fascinated us with the possibilities and adventure of founding the first whisky distillery in Israel.” 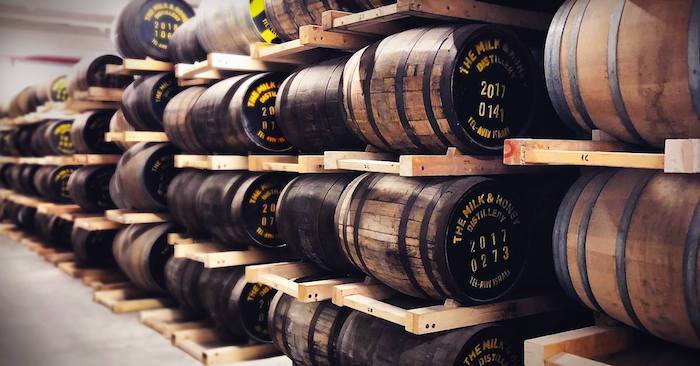 Dr. Swan would later become the M&H Whisky Distillery’s first master distiller, with his ideas and techniques used to this day to create their flagship single-malt whisky. Chotiner said it’s innovation and adventurousness that are the key values that lead them in making their whisky, with a dedicated crew that “helps make the dream of an Israeli whisky distillery a reality.”

So what was the inspiration behind starting a distillery in Israel and getting into the business in the first place? What were the challenges of starting up a distillery in the region where so many nearby countries all-out ban alcohol?

Chotiner said the inspiration was and remains the same … true love for whisky. “Passion and innovation have taken us a long way and continue to lead us today. Also … they told us it can’t be done, so we did the Israeli thing, and made it happen. The challenges of starting up a distillery in Israel were many indeed, but the alcohol-ban in neighboring countries was a non-issue. If you ever visit our new friends at The United Arab Emirates, make sure to check out the local bar scene … our whiskies and gins will be waiting for you there on the top shelf.”

And speaking of top-shelf whisky, Milk and Honey was founded as a single malt distillery, with the concept of distilling all of their products, not just the whisky, from 100-percent malted barley.

“Although we have experimented (mostly for research purposes) with other types of grain a few times over the years, even today, almost a decade since our foundation, we are still dedicated to perfecting our single malt new make,” Chotiner said.

So, what about a bourbon like product, then? “Having said that, we are not ruling out anything, and who knows what the future may hold…”

For the most part, Chotiner explained that Milk and Honey’s single malt is a product of one important and unique element of their region … the dynamic climate. “It contributes to an expedited and deeper maturation process. Israel has five different climate zones, with deserts, farmlands, snowy mountains, sandy beaches and a cool wine country … all within a few hours’ drive from each other. These special conditions also present opportunities and have a great effect on our casks selection.”

For example, Israel has a prosperous wine industry spread all across the country, with a wide variety of grape strains. Some of those strains are endemic to Israel and have been growing there for thousands of years. Chotiner said that casks from Israeli wineries are an important part of the distillery’s core range. “And the whiskies these casks produce are truly amazing. For instance, one of our most unique is our pomegranate wine casks. That tastes like nothing else and is honestly mind-blowing.”

Aside from whisky, Milk and Honey brings another spirit to the forefront … their Levantine Gin.

Chotiner said Milk and Honey founders and distillers celebrate their vibrant culinary heritage with a wild party of flavors and ingredients from around the world, items that together create the Israeli cuisine. “The verbena and chamomile that we drink in our tea, the black pepper and cinnamon that spice-up our food, the lemons and oranges that grow on the trees right here in Jaffa and of course the Za’atar (Syrian oregano) which is a wild herb that is a staple of the whole Middle-Eastern cuisine, these are the flavors we celebrate in our Levantine Gin.”

Honoring heritage was key for Milk and Honey as production ramped up. But Chotiner said their core value is to “love what you do and enjoy the adventure. At the same time, be professional, never stop learning and researching. Always be collegial, and remember that your success is everyone’s success.”