The Lakes Distillery in England is striving be a serious contender when it comes to producing single malt whisky from this corner of the United Kingdom. Not content with the recent debut of its forthcoming four-part Quatrefoil Collection, it has also let it be known its first ever true single malt is set to be released later this month in a rather exclusive collectible fashion.

The Lakes Genesis, according to those behind it, is a three year old English single malt whisky that’s been bottled at cask strength. It was first matured in ex-Oloroso sherry hogsheads and followed up in casks made up of American and European oak. Finishing was then done in ex-orange wine casks from the Andalucía region of Spain. 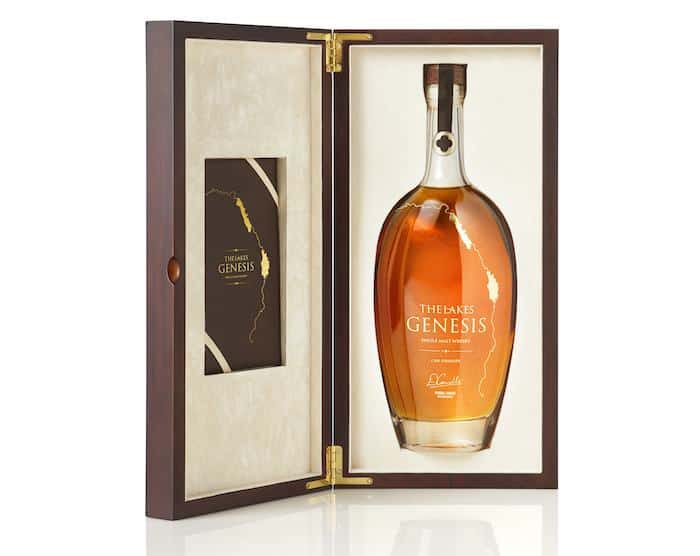 The Lakes Genesis (image via The Lakes Distillery)

“We believe that our whisky making philosophy ensures obsessive attention is paid to the areas of the process which contribute towards flavour delivery, the key to great whisky,” said Paul Currie, Founder and Chief Operating Officer of The Lakes Distillery, in a prepared statement. “Our range of individually specified oak casks, combined with the skill and artistry of our whiskymaker, deliver a whisky which elegant, but full of complex sherry-led flavours.”

Plans call for 101 individually hand signed and numbered bottles, presented in a bespoke rosewood presentation box, to be made available. The majority of these will be put up for a special online auction that runs from roughly the end of June through mid-July. It is believed by those at The Lakes that a record will be set for the most expensive English whisky to be sold at auction.