Column: Sustainability Throughout The Whisky Distilleries Of Europe

When NcNean, a Scottish whisky distillery, announced recently that they’ve managed to achieve their goal of reaching net-zero carbon emission for their production, I got curious to see what other distilleries around Europe are implementing to increase their sustainability.

Whisky distillation might not seem like the most sustainable process of making spirits. For many distilleries it entails shipping big quantities of grains, high energy usage to heat the stills as well as using a lot of water and also a lot of wood for casks. The usage of wood is especially problematic within bourbon production where the wood only can be used once. But there’s plenty of innovative ideas and distilleries, like NcNean, leading the way towards a more sustainable future. Around Europe there’s plenty of examples of distilleries that have a sustainable focus. Since some European distilleries haven’t been around for hundreds of years, like some in Scotland, there’s more recent ones that have had the opportunity to consider more sustainable options when building the distilleries.

Bivrost in Norway used an eco-friendly building technique by building their distillery in cross-laminated timber and Mackmyra in Sweden moved their production to their current site which features a gravity distillery, designed to help reduce their carbon footprint. Bivrost also collaborate with a local waste disposal company and recycle staves in to furniture, art and souvenirs that guests can purchase in the visitor centre. The offcuts of the staves are given to the local salmon smoker, Harry, to be used for his smokery. 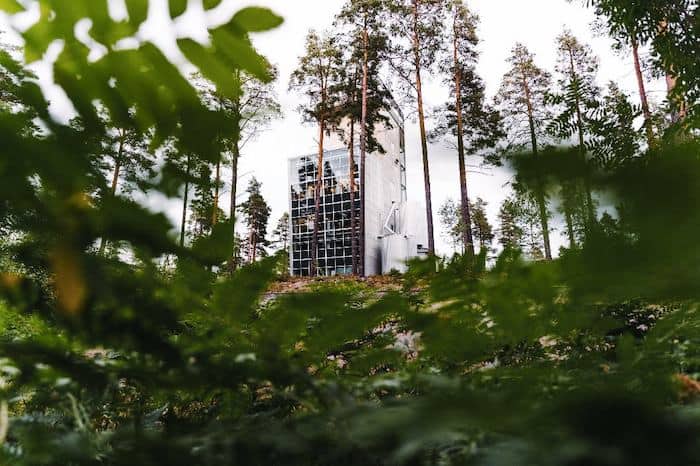 One of the big issues for the distilleries is their energy production and it seems many distilleries are trying to find the best solution for reducing it the best they can. Slyrs in Germany is investing in a heat recovery concept, whilst also trying to make sure to use as little energy as possible and newcomer Agitator in Sweden uses energy from a heating plant which only uses renewable energy sources and implements vacuum distillation which is more energy efficient. Finnish Kyrö uses locally produced bio gas, which uses fish and pork processing waste as a raw material. In 2020 they were operating with 85% renewable energy, a number they also hope to improve upon.

Another aspect that seems to become more and more common is the use of local grains. Europe is a great place if you are looking for grain – even Scotland sources a lot of the barley for their whisky production from mainland countries like France, Germany and Poland so it makes sense that distilleries in these countries would want to use the local resources for themselves.

The Warenghem distillery in Brittany, France is one example that uses wheat and barley grown locally. In France there’s also Brenne who use barley grown on the estate where this eau-de-vie turned whisky distillery is located and also uses local French limousin oak as well as cognac casks for their maturation and a yeast strain that has been in the distiller’s family for generations. Their grain is also fully organic by both EU and USDA standards. But they’re not the only distillery with organic grains; for example, in Sweden you’ll find organic single malt at the Isle of Lime on Gotland that uses local island barley and in Germany there are several distilleries producing organic whisky.

Nowadays it can also be difficult to spot who is actually using green methods and a sustainable approach and who is “greenwashing” and only giving the impression that they are more environmentally friendly than they are, to gain good publicity and marketing.

But within the EU you can easily spot products marked with the “Euro-leaf” symbol which showcases organic products that hold the EU standard. Norrtelje Brenneri is one of the distilleries carrying this symbol and they also focus on glass recycling, minimising transports and reusing machines, equipment and building materials.

Oh and of course I can’t resist mentioning maybe the most famous recycling of waste products at a distillery: the residue from the mash tun, aka the draff. I feel like pretty much every single person who has been on a distillery tour has been told about how happy the local farm animals are, cows in particular, since the draff gets distributed to local farmers to be used as nutritious cattle feed.

Even though there’s great examples of distilleries that are improving sustainable distillation, it’s far from everyone who is proudly announcing their green efforts and approach. Perhaps it’s still happening behind closed doors, but maybe we need more distilleries to shout their engagement from the rooftops to make sure all distilleries act on their responsibility to help create a greener future.