Just last September, I threw down sixty-five bucks to hear Anthony Wills, Founder of Kilchoman Distillery, speak at the Highland Stillhouse in Oregon City, Oregon. It was a great night, to be sure, with yummy food and drink. Wills gave all of the requisite background about his young distillery. I was surprised to find out that he’s actually an Englishman.

Kilchoman was founded in 2005. That seems so recent to me. Thirteen years ago. And yet, as Wills explained, the journey has been a long, hard, rock-strewn path for the little-distillery-that-could. Like the old saying goes, whatever doesn’t kill you, makes you stronger. In the case of Kilchoman, the future is ripe with possibilities. I’m waiting for some killer whisky to materialize.

Speaking of which, I really like the way folks at the distillery use barley grown on site at Rockside Farm. Not only is it grown there, the barley is also malted on location, which happens to be the western-most distillery on Islay. Of course, it’s worth mentioning that some Port Ellen malting is also used . . . but of course that operation is also located on Islay. 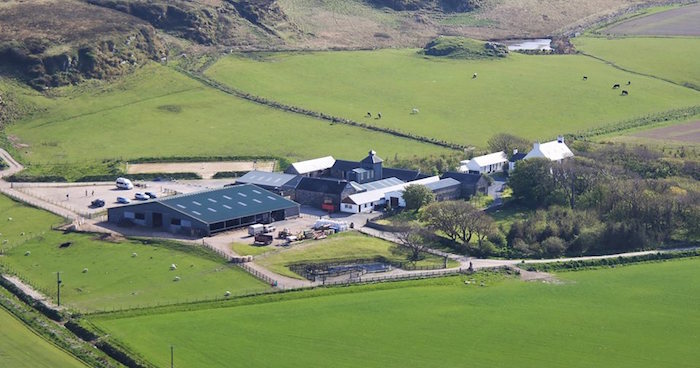 The grounds of the Kilchoman distillery (image via Kilchoman)

The Biggest Secret in Whisky

“Locally sourced” is a buzz word among foodies these days. Yes, yes, a lot of them are “hippies.” But more than a few wear all black clothing, face tattoos, piercings in their noses, and they listen to Slayer and Lamb of God. Which begs the question: “Are there any real hippies left on earth under the age of seventy?” Who knows, but lingo such as locally sourced can get a little annoying. If you had asked me five years ago, I wouldn’t have paid it much heed when it comes to making whisky. These days, however, I’m all ears.

For me, the primary reason has to do with quality. But why, you ask, does it matter if a distillery maintains a close, hands-on relationship with the barley that goes into its whisky? Oh, Lordy. That’s the billion dollar question when it comes to single malt Scotch. And yet, it’s also one of the most overlooked. Yes, there’s a very good reason why this concept has grown into an invisible eight hundred pound gorilla on the malting floor. He’s got three names, and they are one in the same: Money Money Money.

Nothing could be more fundamental to a spirit’s success than the actual plant used to make said spirit. Indeed, if I could name one thing that has changed the quality of whisky over the past thirty years (for worse) then it would be the modern high tech strains of barley used. These produce superior yields of alcohol, true enough. However, added proteins and other tasty plant “stuff,” which often comes up missing from high-yield factory farmed barley, can make all the difference.

As it turns out, older strains of barley, from years gone by, are often best suited to make rich, complex single malt Scotch whisky. Okay, enough talk of spiritus mundi. Let’s pop the corks on some bottles and get down, dirty, and malty.

Taste: Pumice; acrid smoke and ash; compost bucket; clotted cream; raspberry; mango; honey dew melon; and evaporated red wine. The sharp smoke and red wine sugars seem at odds with one another, at least to some extent. Interesting experiment, though not entirely successful. Five or six years of aging in ex-bourbon or charred oak, followed by a red wine finish of one or two years might have worked out better.

Appearance: Pale straw in color with regularly spaced legs and some beading.

Aroma: Lovely rich smoke with the traces of tar and creosote. The whisky noses much older than a mere six years. Ah, love it! There are notes of marzipan, nettle, marshmallow nougat, cherry paste, Russian tea cakes, powdered sugar, and sandy river silt. In some ways, this sweet side reminds me a little of a Highland Park 12 Year Old Dumpy.

Taste: More fiery burn than was indicated in the nose. In a few seconds, the heat mellows out, revealing notes of peanut butter, modeling putty, flax, skunk cabbage, white pepper, Popsicle stick, malted milk ball, chalk dust, shortbread, and sea salt. The finish is medium to long, vacillating between shortbread and peat smoke. It concentrates in the very back, and on the front tip, of the tongue–which is a first for me.

You gotta love the extra level of sweetness and complexity that Buffalo Trace barrels contribute to the aging process. They’re pretty darned expensive to source. 100% Islay Sixth Edition has Whisky Kirk’s seal of approval. It’s a good deal for under $100.

Appearance: Amontillado sherry in color with legs like a wavy sheet of river ice. No appreciable beading.

Aroma: Very focused smoke that wraps itself into a nutty, nougat-like cocoon. Now I’m getting modeling putty. Again. What’s with this ubiquitous note in Kilchomans? The sherry wood influence seems muted in terms of its fruitiness, with a creamy development that burrows deep into the nostrils, and then is reborn like a butterfly with notes of iodine, rock salt, baklava, butter pie, and Play-Doh.

I know, I know. This explanation sounds all over the place, but I’ve got the killing jar (glencairn) with a live specimen. Take my word for it: this single malt transforms itself from caterpillar into butterfly. The more you try to pin down Sanaig’s aroma, the more it flutters away. Does this mean the whisky is complex? Not really. I’d say it’s unusual, however, at least for a Kilchoman.

After about ten minutes in the glass, Sanaig begins to flirt with being “industrial,” and yet the broth falls short of High Alchemical Strangeness, a category to which Mezcal, gin, and Banff single malt Scotch belong. Sanaig’s finish is medium, and, well . . . not terribly memorable. The flavor tastes youngest of all whiskies so far in the round up. Surprise, surprise, it’s also NAS. Bah humbug.

Aroma: Upon first being poured, a meaty kind of smoke emerges that reminds me of Deviled Ham spread. I like it. In time, the peat mellows with air, giving off a well rounded aroma like watered-down Uigeadail from circa 2009. Additional notes include canned pear in syrup, limestone, light molasses, Chick-o-Stick, graham cracker, geranium, silly putty, and freshly mowed vetch.

Taste: Sharp peat smoke and lime extract seize the tongue. Then comes the second act in waves of wet cement, beef jerky, lemon balm, chicory, paprika, moss, cedar bark, and stewed lentil. The long finish of this one is more memorable than Sanaig, to be sure. Considering this whisky is up around eight years old, I was hoping for greater complexity, however. That’s a ripe old age for a Kilchoman.

Kilchoman is all about returning to basics, and it shows. Even though the bulk of this distillery’s offerings are young, they often taste older. The drams that I tasted today served to reinforce the importance of a small scale, craft-oriented approach. Granted, none of them blew me away, but they show promise.

These four Kilchomans made me nostalgic for Ardbegs of yesteryear, the makers of which also observed a time-honored, craft-oriented approach, as well as malting what today would be called “heirloom barley.” I once attended a talk in which Dr. Bill Lumsden made fun of the old Ardbeg distillery . . . how light switches were held together by shoelaces and tape at the time he took over the operation.

Well, I would gladly drink a bottle of Ardbeg Ten with broth made from the days of shoelaces and tape, as compared to what’s been coming out of the distillery lately. In fact, if I were chatting with Anthony Wills, then I might suggest he lay hands upon a few bottlings of Hiram Walker owned Ardbeg (1989-1996), and pre-1981 era Ardbeg.

The best way to become a great distiller is to study (smell, and taste) the works of great distillers that have come before. Come to think of it, there is no other way. P’raps a visit to Bill Lumsden’s office is just what the doctor ordered. If anyone has the secret sauce, it is he.