When people talk about Scotch whisky, maritime imagery comes up a lot. So let’s start with a beach metaphor.

Wonderful Glenmorangie is like visiting a beach in San Diego. It’s great! It’s 85 degrees, it’s sunny, the water is warm, and everybody’s having a fantastic time. Lagavulin is like a visit to the Oregon Coast. Describe the experience objectively—it’s cold, it’s grey, it’s rainy, there’s not much to do and certainly no place to swim without a dry suit or a death wish—and some might wonder why bother going at all. To others, there’s nowhere else in the world they’d rather be.

Sunny beaches are terrific. But sometimes you need an experience with a little more grit, something that reflects the grimy, complex, trying, sometimes objectively bad experience of real life. For times like that, there’s Lagavulin. It’s peaty, medicinal, pungent, smoky, a Band-aid factory in the throes of catastrophic meltdown, and when you really need it, nothing else will do.

Lagavulin, located on the southern coast of the island of Islay, is one of the world’s most famous Scottish distillers. It was founded in 1816, and eventually made its way into the Diageo portfolio, where it’s one of the six whiskies to make up the Classic Malts of Scotland series. All of Lagavulin’s distillate is made with heavily peat-smoked malt, giving its products that signature reek and pronounced maritime character that leads many to point to it as the canonical Islay whisky. In addition to the use of peat-smoked barley from the nearby Port Ellen Maltings, the distillers at Lagavulin credit relatively long fermentation times (at least 55 hours) and a slow secondary distillation process as key aspects to developing Lagavulin’s unique flavor.

Lagavulin 16-Year-Old is the distillery’s flagship expression, routinely hailed as one of the world’s best officially bottled single malts. But Lagavulin isn’t a one trick pony. It also offers an annual Distiller’s Edition release aged in Pedro Ximenez sherry casks, an annual vintage-dated 12-year-old release, and the recently added eight-year-old expression, which was released in honor of the distillery’s 200th anniversary but has stuck around for at least another year (at least in my liquor stores). Nevertheless, it’s the 16-year-old that keeps the lights on at Lagavulin—for good reason. 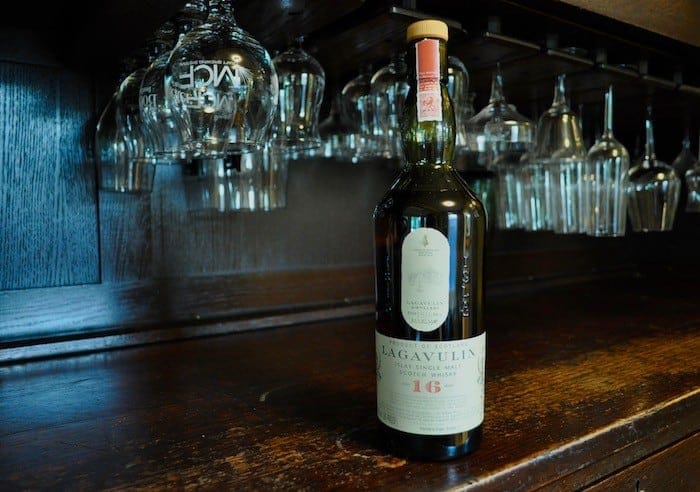 Vital Stats: 16 years old, single malt, somewhere around $70 at retail, give or take.

Nose: Oh, geez. There’s peat, first of all, a big, pungent whack of it, laced with smoked fish and driftwood and salty rocks. But underneath that, there’s a great big ocean of sweet, caramelized malt, all baked apples and cobbler crust. Plenty of industrial character, too—soot, rubber, hot electrical equipment, and that magical, grimy petrichor of a dirty urban sidewalk after a summer’s rain.

Palate: You know that saying “turns to ashes in your mouth?” This is like the opposite. At first, it’s like a mouthful of recently extinguished ashes—charred, powdery, astringent—but then a lush, maritime garden quickly comes into Technicolor focus. Basically, Lagavulin 16 tastes just like a real boat: varnish, diesel, salty nets, ocean spray, and the sticky lanolin-rich smell of a thick wool sweater a hardworking man has been wearing one too many days in a row.

Over several minutes in the glass, ghosts of fruit emerge—orange and red cherry, mostly—but never seem to break through the low-hanging haze. That’s alright – a suggestion is enough.

Lagavulin 16-Year-Old is satisfying in a way that many other things are not. You might not like it, but if you enjoy whisky, it is essential for you to buy a bottle of Lagavulin 16, and drink it. It might take you the rest of your life, but it’s important.