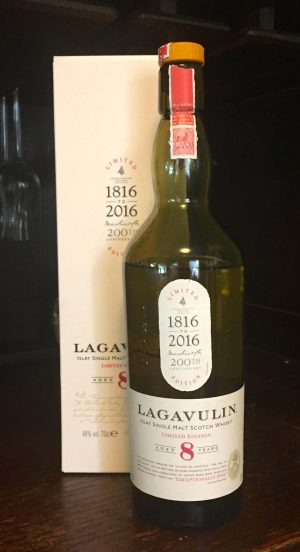 Lagavulin is a class act. Founded in 1816, Islay’s most upscale single malt retains a kind of unimpeachable greatness even today, beloved by all, from the San Francisco World Spirits Competition to everybody’s favorite fictional boss, Ron Swanson.

That classiness just went up another notch. To celebrate their 200th anniversary, Lagavulin didn’t just release a super-premium, unobtainable, uber-expensive commemorative expression exclusively for deep-pocketed connoisseurs (although they did do that). They also released a younger, more affordable version of their famous 16-year-old: Lagavulin 8-year-old.

Why? It’s a tribute to Alfred Barnard, famous Victorian whisky enthusiast and author of The Whisky Distilleries of the United Kingdom. During his research he visited every functioning distillery in the U.K., making him perhaps the world’s first whisky ticker. In the 1880s, he dropped in on Lagavulin, where he tasted an eight-year-old expression of the famous peated single malt that he called “exceptionally fine.”

Releasing such a young whisky under a luxury brand is a bold move, but maybe it shouldn’t be. Nick Moran, spokesman for Diageo, says “The obsession with age statements and older whiskies is really a product of the late 20th century…age has become a lazy way of defining quality and price. And that’s demonstrably not how it should be.”

In the NAS era, it’s a refreshing perspective. During some periods, younger whisky was actually preferred to the old stuff. Take Glen Grant. Its charismatic second owner, James ‘The Major’ Grant, oversaw growth in aged whisky sales – but kept a deep stock of the young stuff, “plain and clear,” for drinkers in his local community, who preferred a lighter, fruitier flavor.

Nose: Tons of kippery peat mixed with a fresh grainy sweetness, like multigrain bread toasted over an industrial fire and slathered in clover honey. Notes of briny salt overlay a fundamental freshness, aromas of ripe pear and soft dried apricot. There’s also a bit of hay-like character, but very lively and fresh-cut. Peat skews towards the maritime, but the smoke is bold too.

Palate: Unflinchingly smoky in a heavy, extinguished campfire kind of way. Lots of that kippered fish character sticks around from the nose, salty and iodine, without straying over into meatiness. Nice notes of pear candy and apple peel as well as a sweet, almost sticky malt character runs under the whole thing, tapering off to a long, dry, pleasantly ashy finish that hangs for a long time. So delightful that you’re loath to taste anything else.

This is whisky in HiDef – pure, clearly defined, unadorned, with a laser-like yet not overwhelming intensity. Despite its relatively high proof, it’s not particularly hot, and the balance between smoke and sweetness is hugely inviting. It’s like the essential core of what makes Lagavulin Lagavulin, stripped of any superfluous vanillins. Plus I appreciate how beautifully this bucks the twin contemporary Scotch trends of fantastically expensive luxury bottlings, and goofy NAS spirits. Effing great. I loved everything about this.