What May Have Been A Hidden Distillery Is Discovered In Scotland

For as long as whisky has been made in distilleries, legal or illicit, there are those facilities that for one reason or another have been lost to time. Whether it is because of bankruptcy, consolidation or simply turning the lights off and walking away, the end result is abandoned and decaying buildings and work areas scattered in places like Scotland and Kentucky. For the former, Forestry and Land Scotland (FLS), a government agency tasked with managing Scottish forests, recently discovered on some of its land what may have been a one time illicit distillery.

The possible hidden distillery site, according to those who took note of it, is said to have lain hidden in Loch Ard forest as remains of the 18th century farmsteads of the Wee Bruach Caoruinn and the Big Bruach Caoruinn. This included their large corn drying kilns, which is something that led archaeologists to think there might have been some kind of distilling going on here at one point in time.

“The farmsteads of Bruach Caoruinn were flagged up by the local history society as being of interest – the surviving narrow buildings are unusually long, and are associated with two large corn drying kilns,” said FLS Archaeologist, Matt Ritchie, in a prepared statement. “Set in a relatively inaccessible area yet close to Glasgow, in close proximity to water and with strong associations with a number of the important families in the district, it is possible that the site was a hidden distillery, producing illicit whisky in the early 19th century. 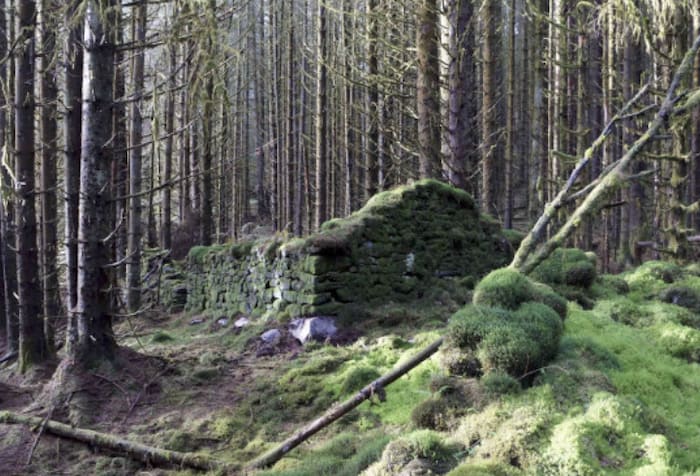 “You can malt grain in a corn-drying kiln, and the long narrow buildings would have been perfect for fermenting and distilling whisky. I wonder if there had been illicit whisky being made at Bruach Caoruinn on an almost industrial scale. There is no surviving evidence, bar historical whispers. But is this really surprising?”

It is noted by FLS that, in the late 18th and early 19th centuries, “illicit distilling was rife in the Highlands of Scotland. The government had wanted to extend its control over whisky production and the Excise Act of 1788 banned the use of small stills that made less than 100 gallons (450 litres) at a time. Excise officers were given powers to search for illegal whisky stills and to confiscate the equipment and whisky they found. Highland whisky production went underground and stills were hidden in remote places.

“Commercial legal whisky was of poor quality due to the high rate of tax imposed on the malted grain used to make whisky. To cut costs, the large lowland distilleries began to use unmalted raw grain. This produced an inferior drink called corn spirits. The illicit stills paid no tax and continued to use good malted grain, and so, once it had been smuggled to lowland markets, it fetched a higher price than the whisky made by the licensed whisky distilleries. Customers for the illicit whisky were not just farmers and workers but the rich, even the judges and lawyers whose job it was to stop the trade.”

The area where this was found FLS had planned to harvest trees from, but the discovery of these buildings led to more careful consideration of how to do that. Ritchie and others recorded the surviving ruins, planning how to do the work without damaging the remains.