Bourbon Archaeology: Digging Up Distilleries Of The Past

Riding along a ridge 30 stories above the Kentucky River bed in his Jeep, Archaeologist Nicolas Laracuente explains there were once 200 stills on the tax records in Woodford County, Kentucky, alone. There were even more that weren’t on the tax records, he points out, because the one we’re headed to doesn’t show up in any tax records he’s yet seen. He found the site we’re heading to referenced in a lawsuit filed well over a hundred years ago.

The Beginning of Bourbon Archaeology

Laracuente became fascinated with archaeology during an elective class he took as an undergraduate at university. A common view of archaeology, which he shared before the class, is that “all the cool stuff has already been found.” By the end of the semester, when he realized there was still plenty out there to be found, he abandoned his pre-med program for archaeology. 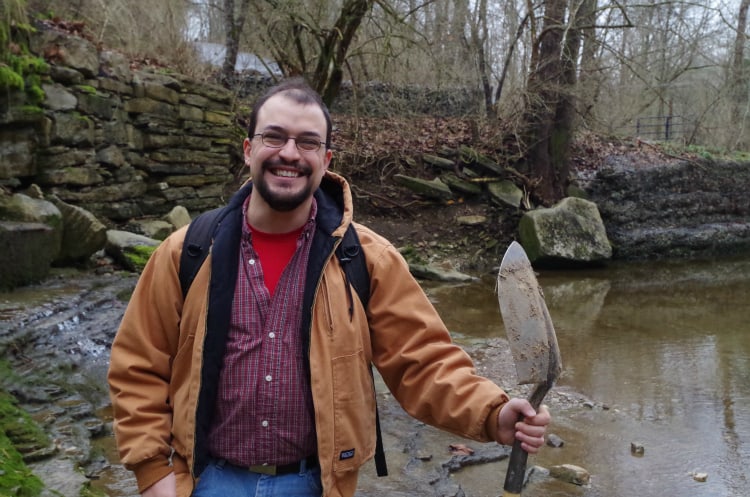 After working in Florida searching for Spanish Colonial Missions, he realized there were probably undiscovered bourbon and corn whiskey distilleries back in his home state of Kentucky. He abandoned seven years of work and headed home to begin his search.

Shortly after his arrival, he was driving along the back roads of Woodford County when he got lost in the fog. As he came over the top of the hill he saw the Old Taylor Distillery rising from the fog ahead of him. Laracuente, a former Army brat, had lived in Germany as a child and had always been fascinated by the castles dotting the landscape. Seeing such a magnificent structure in his own home state solidified his drive to find abandoned sites and tell their stories.

He began reading Chester Zoeller’s book Bourbon in Kentucky: A History of Distilleries in Kentucky, which confirmed his theory there were lost distilleries out there waiting to be found. What’s more, he began to understand there were entire towns wiped off the map because of Prohibition. Tyrone, Kentucky, is a perfect example of this. Located just outside of the present-day Wild Turkey Distillery, this town was once home to as many as nine different distilleries. One of the more notable distilleries was run by Mary Dowling, who famously moved her operation to Juarez, Mexico, and continued to produce bourbon there during Prohibition. 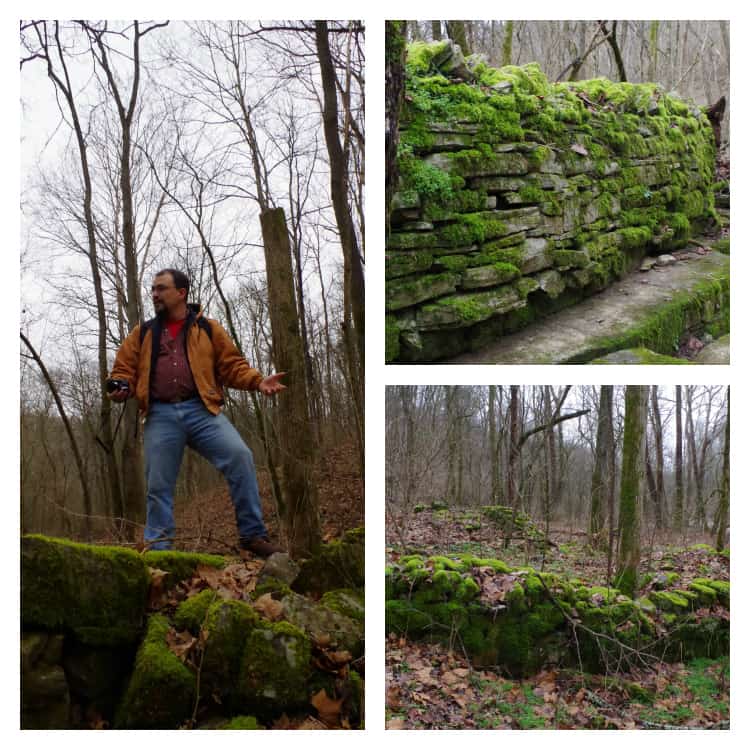 We reach the end of the narrow road and begin pulling shovels and gear out of the back of the Jeep. Making our way to the edge of the rock face, we begin our descent into the creek bed about 15 feet below the forest floor. The climbing is especially treacherous on this January morning because moss has grown over the rocks, making them slick. Wading through the ankle-deep creek is going to be our safest route.

The hike to the site is short but difficult – the only trails that far out are made by deer. We crisscross the creek a few times before a mossy limestone wall comes into view. This first one is probably a retaining wall for the wagon trail above, Laracuente explains. We hike a little further.

“Right here is where we found a button,” he says. It was the first artifact found at the site and it’s now on display at the museum a few miles away. I asked him how on Earth he found a button in the woods.  “Metal detector,” he laughed. As we make our way through the site, still marked by surveyor’s flags, he points out a wall here, a spring there, and a place he refers to as the “horse parking lot.” “We found part of a horse bridle over there,” he says, pointing to the outside of a limestone wall.

Then we get to the garbage dump. Laracuente has explained to me before the archaeological significance of finding garbage dumps near sites – there are a lot of different kinds of artifacts in a central location to sift through. One way you can tell when you’ve found a garbage dump as opposed to a collapsed structure is because the nails you’ll find will be different, he explains. If this had been a house or another structure, all the nails would be the same, but all the nails found in this area were different shapes and sizes. They also found cooked animal bones and a lid to a pot, suggesting people were cooking meals in the area as well.

We hike all around the site examining small remnants of roads, a possible spring house, and a man-made ditch where creek water was diverted to run the mill for the distilling operation. Laracuente points out how the topography of the area is constantly changing, between the creek jumping its bed during heavy rainfall and the side of the hill ever succumbing to gravity and sliding downward. The latter has likely prevented the former from wiping out the site completely.

The Future of Bourbon Archaeology

Back at The Jack Jouett Historic Site Visitor’s Center, we examine all the artifacts volunteers have found over the last two years at the distillery site. There’s a partial barrel of a gun and a jaw harp in one case. The drying racks were built by a volunteer. The entire project, in fact, has been staffed by volunteers, with Laracuente as the Project Director. Over the years he’s worked on archaeology projects at Buffalo Trace, Woodford Reserve, and Old Taylor. He has two new projects in store for 2016, which will also be staffed by volunteers.

You can find Bourbon Archaeologist Nicolas Laracuente on Twitter @archaeologist and you can read his blog here. You can reach the Jack Jouett Historic Site for more information on volunteering or donating money to support bourbon archaeology here.