The Glasgow Distillery, as we first touched upon last year, is that Scottish city’s first new independent single malt distillery in over a century. At that time it announced its first single malt whisky, a young expression bottled at 46% ABV. The distillery is back now with a new offering, its first ever peated Scotch.

The new 1770 Peated whisky, according to those behind it, is distilled from what’s said to be “the finest barley” that’s been smoked with aromatic heather-rich peat from the Scottish Highlands. It is matured in first fill ex-sherry casks and finished in virgin oak before later being bottled at 46% ABV.

“It’s very exciting to finally be bringing our peated 1770 out,” said Liam Hughes, CEO and co-founder of The Glasgow Distillery, in a prepared statement. “Our peated run was originally a much smaller percentage of our overall production but when the first spirit came off the stills, the distillers told me I had to taste it. 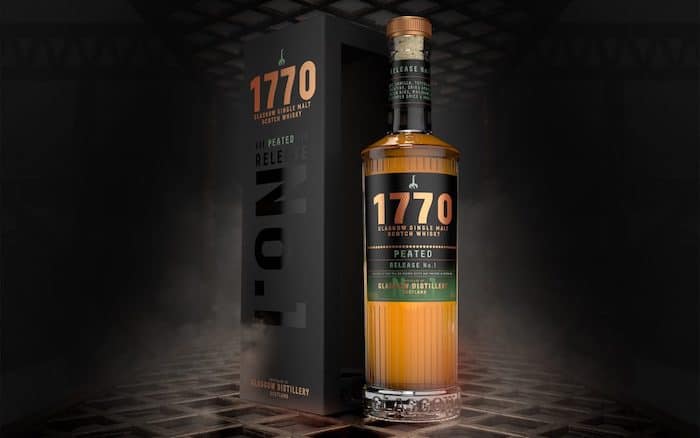 “Within the hour, Mike (my fellow co-founder) and I ordered three times the quantity of peated malt we had originally planned. The quality of the spirit we were tasting was so good, we just knew we needed more.”

Plans call for 1770 Peated to be released later this month in Scotland for a price point of £49, or around $60 USD. Official tasting notes for the distillery on this expression indicate it has “hints of flamed orange zest and rich caramel toffee leading to various dark earthy fruits. The finish is said to be long and smooth with lingering notes of macadamia and spice.”

It should be noted as well Glasgow Distillery recently added in two new whisky stills which have been named in honor of two of the city’s great female artists, Margaret and Frances MacDonald. The addition of these new stills, it is said, “will boost the distillery’s production capabilities to approximately 440,000 litres per year – the equivalent of more than one million bottles of its 1770 whisky.”