My distillery is part of a farm. We’ve got 30 acres where we grow our own barley for our whisky. It’s a whisky control-freak’s dream. But barley doesn’t come harvested from the field ready for the still-house. It has to be malted first, which outside of promo pics for a few famous Scotch distilleries, is probably the least sexy part of whisky making, but damn if it isn’t important.

The process of malting barley produces malted barley. (A “no-duh” statement if there ever was one.) The main functional difference between barley and MALT barley is that malt barley contains enzymes that, when exposed to warm water, break down our grain starch (not fermentable by yeast) into sugars (fermentable by yeast and good for bribing your three-year-old to pick up their toys). How do we get malt barley? Read on, friend. Read on. 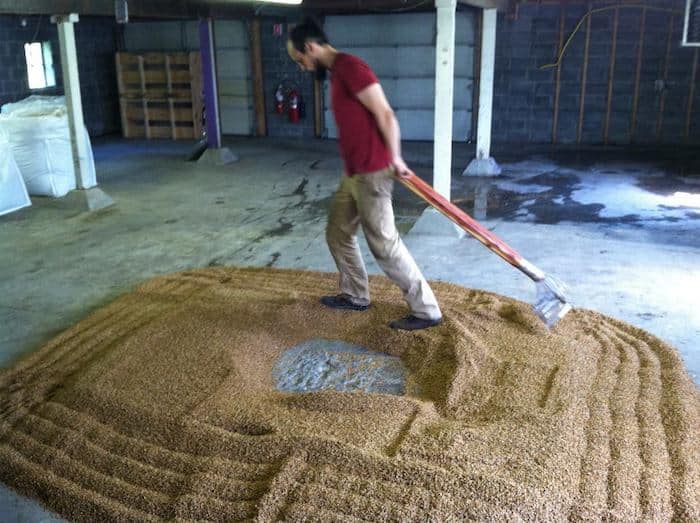 In order to get barley to produce the enzymes we need for our whisky mash, we need to trick the barley. Barley kernels are seeds which hold baby barley plants. The enzymes we want come about when the embryo plant decides it’s time to start growing. So malting is essentially tricking a bunch of baby plants that it’s time to grow and then killing them before they use all our starch and sugar. It’s brutal, I know, but whisky requires sacrifices.

It all starts with water. The first step is called the steep, and it involves, fittingly enough, the steeping of barley kernels in water. This usually lasts for about two days. During this time the barley is submerged in water and absorbing it at a rapid pace. We’re taking the barley from field moisture of about 13% to 45%. All this extra water is getting inside the grain and allowing the various enzymes and hormones to begin to do their thing.

Once we reach the moisture level we want, then it’s time for the germination step. This is where we take the barley out of the steep tank and allow it to germinate (i.e. start growing roots and leaves). This process goes on for about three to four days. The germination floor is also where you’ll see all those fancy photos from Scotch distilleries doing their own malting. The floor builds up a lot of heat from the grain respiring and growing. Heat isn’t good at this stage, so maltsters go onto the floor to rake and turn the malt. It reduces heat and makes sure the germination is proceeding evenly. The maltster really is watching grass grow…whiskey-grass…mmm.

During this period many of the enzymes we want are released and/or formed. The plant begins to think, “Hey! I’m going to be a plant!” Unfortunately, being a plant requires the embryo to consume its (our) starch, which we definitely need if we’re going to make whiskey. So, we promptly put a stop to that after a few days of germination.

The final step is kilning, which sounds a bit like “killing,” and tragically for our baby barley plant, that’s what it is. We load the grain into a kiln, which has a perforated floor and a way to blow heated air up through it and the grain bed. The air brings the moisture down from 45% to 5% over a period of 24 hours. This locks our enzymes in place for use in the mash.

The kiln is also where we can add peat smoke (or other types of smoke) to the malt. By burning peat at 50-60% moisture to produce a cool smoke, we can gently remove moisture from the grain and also add some peat reek.

This all, of course, is a gross oversimplification of things. Malting gets complicated fast, and there’s a lot to understand. But it’s so much more than just watching grass grow. Maybe that’s why, along with the concurrent increase in craft breweries and distilleries, we’re seeing an increase in craft maltings as well. It’s an exciting time for distillers as these companies are adding more colors to our flavor palate. Of course, maybe it’s not so exciting for the barley kernels.

Distiller Matthew Strickland has extensive brewing, distilling and winemaking experience. In mid 2016 Matt started with District Distilling Co. from Corsair Distillery, where he led the research and development program, eventually leaving District in late 2018 to open a new farm distillery in Canada. Matt is a faculty member of...