Royal Salute, as a brand, was originally created to mark the coronation of Queen Elizabeth II. As we saw recently with a 21-year-old blended whisky release, it is known often for the special bottles its spirits reside in. This touch is even more in focus right now as they release a special expression known as Royal Salute 30 Year Old The Flask Edition.

Royal Salute 30 Year Old The Flask Edition, according to those behind it, is a blended Scotch whisky, with the youngest whisky in the mix being 30 years old. While the decanter it is initially presented in is nice looking, the real star of the show looks to be the accompanying, custom-made porcelain flask complete with funnel and wooden serving tray. All of this has been designed by Long designer Afroditi Krassa, working in conjunction with Royal Salute’s Director of Blending, Sandy Hyslop. 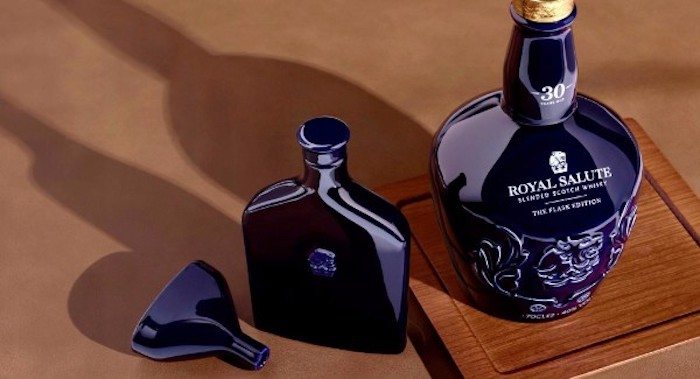 The Flask Edition was first exclusively released in China and sold out immediately. It is now being expanded to more of a global release, and will price for around $790. It is a limited edition offering.

“I have a simple motivation each time I start a new project: I want to challenge the status quo,” said Krassa in a prepared statement. “That’s why I was so inspired by Royal Salute – while all other whisky brands are content with glass, Royal Salute houses its whisky in precious porcelain. I wanted to apply the same attitude to a flask and create something that is beautiful while also turning tradition on its head. Ceramics has a rich history and this project presented a really interesting contrast of ancient techniques crafted for a modern audience.”