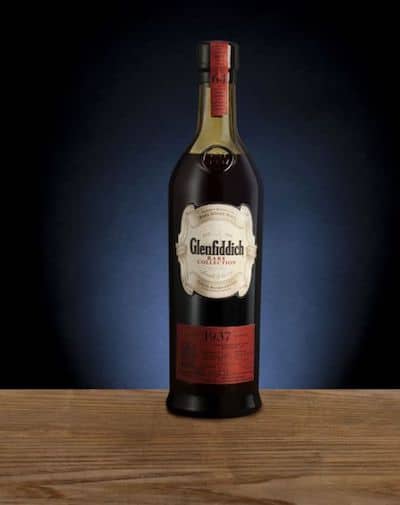 Has Scotch whisky hit a bubble moment? Perhaps, but for the unnamed bidder which just dropped £68,500 (about $87,300 USD) for a super rare 64-year-old Glenfiddich whisky at auction in Scotland, it probably doesn’t matter anyhow.

The just-wrapped-up Bonhams Whisky Sale in Edinburgh had, as one of its signature auction items, a Glenfiddich Collection 1937. This is one of this distillery’s very old expressions, as you can obviously tell from the vintage tag in its name. Specifically, according to the auction house, the whisky

[W]as laid down in cask 843 at The Glenfiddich Distillery in 1937, the year of George VI’s coronation, and bottled 64 years later in 2001. It is highly unusual for a single malt Scotch Whisky of this age to have kept its strength and it is this attribute which makes the sixty bottles from cask 843 so special. It is the oldest and rarest bottling ever undertaken at the distillery.

“It is very much the exception to have a cask of this age that has kept it’s strength, unsurprisingly it is woody and bronze in colour for a Glenfiddich,” Glenfiddich master distiller David Stewart had said at the time of its release. “Cask 843 has the characteristically intense nose of a very old single malt whisky and is best enjoyed without the addition of water.”

The over $87,300 sale amount when the hammer dropped is not only now the highest price ever paid at auction for a Glenfiddich, but it is also said to be the Scottish auction house record for sale of a single malt. The buyer heralds from somewhere in the “Far East.” It was originally projected this whisky would have a top range price of close to $45,000, so the final total is almost double that!

“The record price reflects the exceptional rarity of the Glenfiddich Rare Collection 1937 and its great appeal to collectors everywhere,” said Bonhams whisky specialist Martin Green in a prepared statement.

All total, this particular whisky auction for Bonhams netted £310,000, or a little over $395,000 USD. Though the Glenfiddich was far and away the top prize, other bottlings which sold at over $10,000 USD included a 1964 Black Bowmore and a 52-year-old Macallan.