Dewar’s blended Scotch is a brand with some legs, having been founded back in 1846. It has gone through a number of ownership changes over the years and now rests in the Bacardi portfolio of spirits offerings. Said to be among the top selling blended Scotch blends in the U.S., it recently unveiled overseas for select travel retail markets a limited and very exquisite offering.

Dewar’s Legacy Collection 1893, of which only 1,000 bottles are available at a price of around $3,900, is described as being “skillfully blended from 20 rare and long-aged whiskies, many of which were used by Dewar’s founder” that were “sourced from rare and long-aged casks from Aberfeldy and Royal Brackla distilleries.” It is the first of three limited edition whiskies in a series celebrating key historical moments for the brand. 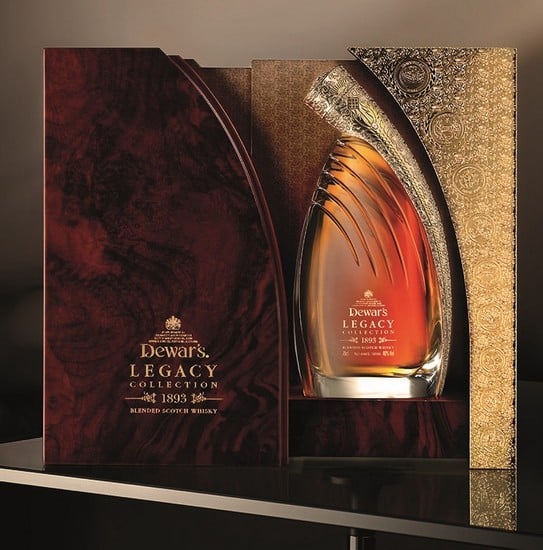 The packaging this special whisky comes in is rather mind blowing: “presented in the finest hand-blown crystal decanter with handcrafted silverware made by Scottish craftsmen, the design is inspired by the dirk, the Scottish ceremonial dagger. The dirk is decorated with a thistle motif with detailing in 22-carat gold, and has as its centrepiece nine sapphires inspired by the famous Stuart Sapphire, owned by many Scottish kings before it became part of Queen Victoria’s Imperial State Crown. The decanter is housed in a burr walnut and gold metal box, which displays some of the many prestigious awards won by Dewar’s.”

As for tasting notes, it is said that “the palate is rounded, creamy and sweet, with enticing flavors of vanilla, toffee and mature oak, balanced with complex-yet-delicate aromatic spices and coconut aromas. Each mouthful reveals dried fruit cloaked in a wisp of smoke.”