Since 2008, the Macallan distillery has partnered with some of the world’s most well known photographers on whisky releases that bring Scotch and quality photography together into one package. The Masters of Photography series, as it is known, recently hit its sixth edition, this time showcasing the work of Steven Klein, a well regarded photographer whose work “is grounded in reality but the template is constructed with elements of allure and dark glamour.”

The Masters of Photography: Steven Klein Edition, according to the distillery, is tied to the theme of time. To that end, Klein used his skills “to create a short film and ten individual images of an incredible tableau.” The whisky is something a first for The Macallan, in that it is their first ever use of casks previously used for Rioja wine, resulting in an expression said to have “sweetness and vibrancy unseen before in any Macallan.” 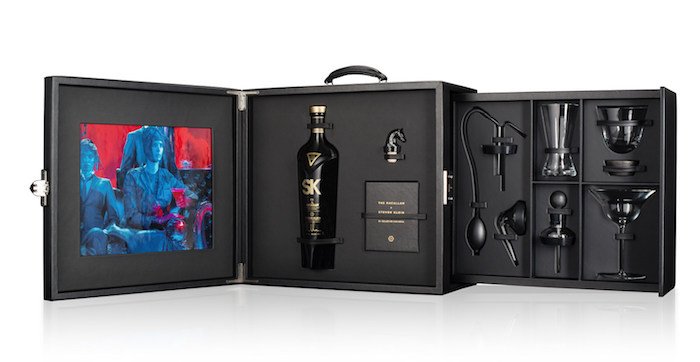 The presentation consists of a black case containing the limited edition whisky and one of ten different Steven Klein exclusive signed prints. A horse’s head bottle stopper, along with a range of custom barware tools to create special serves and flavor experiences, are also included. One thousand bottles are being released worldwide, at a price point of around $3,000 each.

“My intention was to examine a world standing still through a moving camera,” said Klein in a prepared statement. “Typically with consumption of alcohol, there is always an abundance of movement. I thought what if it had all stopped for a moment and I could take a closer look at it. The idea is the perception of time. I used one of my favorite designers, Thom Brown, for the characters because I believe his clothes are bridged between the past and future in a great way.”

Official tasting notes for this 53.5% ABV, red mahogany colored expression are below for your consideration from The Macallan.

41
Shares
150
Views
Share on FacebookShare on TwitterGet Our Newsletter
Cheers to the Dads! Personalize a bottle of his favorite whiskey to create a modern gift for the modern man. Use code: FATHERSDAY20 for $20 off your next order of $100 or more at ReserveBar