Distilled in 1973, Loch Lomond Whiskies recently bottled and released its “newest” single malt release, a 45-year-old Scotch single malt whisky. The expression is the first of three new releases in the “Remarkable Stills Series” of single malts  from the distillery, each designed to celebrate Loch Lomond’s unique straight-neck pot stills.

The Loch Lomond 45-year-old has matured in American oak casks, before finishing a year in a first-fill oloroso sherry cask, adding what’s described as a distinct sweet flavor. The nearly five-decade-old liquid is presented in a Loch Lomond premium bottle, complete with a debossed copper plaque, and enclosed in an oak wood box designed to mirror the design of the Loch Lomond’s straight-neck pot stills.

Only 200 individually numbered bottles have been released, making it one of Loch Lomond Whiskies’ rarest expressions to date. Bottled at 84.4 proof and non-chill filtered, the single malt is priced at £3,450 or around $4,800 USD. 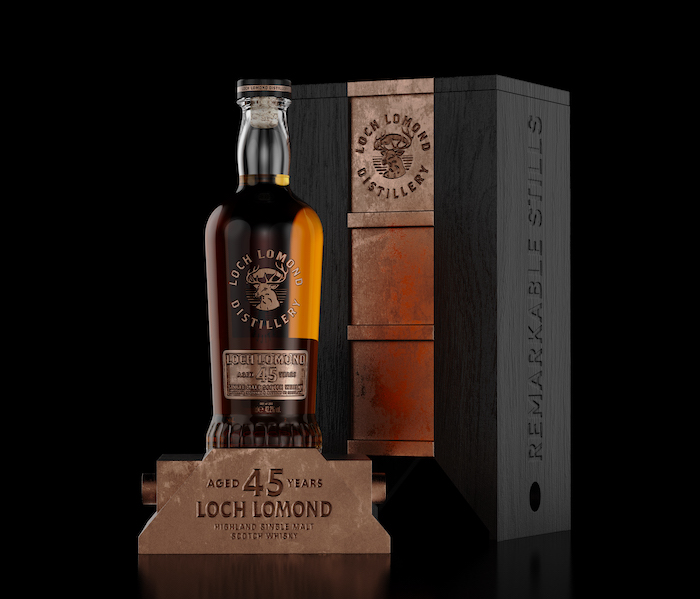 A statement from the distillery said the Remarkable Stills Series will shine a spotlight on the straight-neck pot stills, which are unique to Loch Lomond, and how they give the distiller more control of the type of spirit produced, allowing for greater separation of flavors, helping to create the distinct fruity characters that the brand is said to be known for.

“Our straight neck pot stills connect us to the spirit of innovation that was built into our distillery from the beginning, and places flavor at the center of what we do. It is only fitting that we mark their significance to us through the Remarkable Stills Series,” said Loch Lomond Master Blender Michael Henry in a prepared statement. “After 45 years aging in American oak and oloroso sherry casks, the whisky retains the character of the distillery, and showcases Loch Lomond Whiskies signature fruity flavor beautifully. The flavors of the expression are wonderfully unique, and we hope whisky lovers will enjoy it.”

This year, Loch Lomond has also introduced a 21 and 30-year-old single malt to the portfolio.

John Grieveson, chief marketing officer at Loch Lomond Group, said that a wealth of experience and craftsmanship goes into each of their expressions, “and the Loch Lomond 45-year-old is no exception. It’s a fantastic edition to our range of single malts and as the first expression in our Remarkable Stills Series, we’re very excited about its launch.”

Founded in 1814, the Loch Lomond distillery traces its roots back to the Littlemill Distillery, which was established in 1772 and is the oldest licensed distillery in the world. Its current distillery, in Alexandria, Dunbartonshire, close to the banks of Loch Lomond, was built in 1965 with first distillation in 1966.

Official tasting notes for this expression are below.

47
Shares
6.7k
Views
Share on FacebookShare on TwitterGet Our Newsletter
Cheers to the Dads! Personalize a bottle of his favorite whiskey to create a modern gift for the modern man. Use code: FATHERSDAY20 for $20 off your next order of $100 or more at ReserveBar