Scotland’s Loch Lomond distillery, as we noted in a review of some of their expressions earlier this year, is undergoing a brand revitalization after it was acquired by a private equity group a few years back. Part of this undertaking is the introduction of new expressions into the market, which now looks to include a couple of peated offerings.

The two new Loch Lomond whiskies, according to the distillery, fit under its Island Collection, and are the Inchmoan 12 Year Old and Inchmoan Vintage 1992. Inchmoan, as far as names go, is representative of an island on Loch Lomond – hence the collection it belongs to.  Historically ‘Inch-moan’ meant ‘the island of the peat’ in Scottish Gaelic as for centuries, as the mainland inhabitants used Inchmoan as their source of peat fuel for village fires. 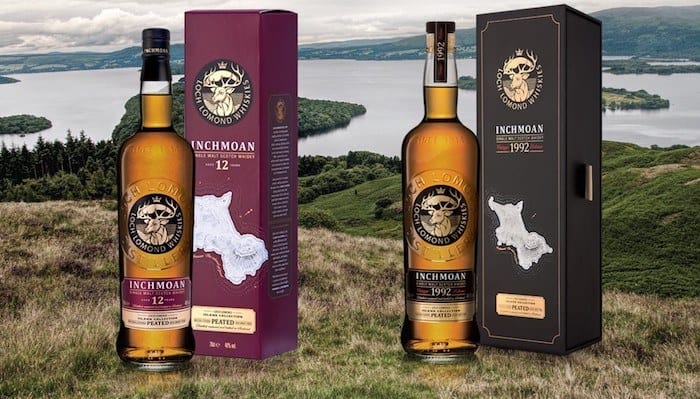 The 12-year-old whisky is said to made from a combination of malt whiskies from the distillery’s traditional swan neck and unique straight neck pot stills. It was aged in a combination of re-charred American oak and refill bourbon American oak casks before being bottled at 46% ABV. The Scotch is also non-chill filtered.

Inchmoan Vintage 1992, meanwhile, was distilled some 25 years ago exclusively in the distillery’s unique straight neck pot still before aging in refill bourbon barrels. It was bottled at 48.6% ABV and is both non-chill filtered and of natural color.

“Our intriguing new Inchmoan expressions have been created to celebrate the history and heritage of the island and are the first heavily peated releases in the Loch Lomond Whiskies range,” said Michael Henry, Master Blender at Loch Lomond, in a prepared statement.