Whisky Review Round Up: Loch Lomond 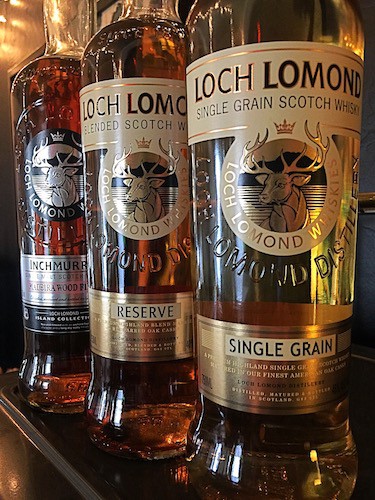 Loch Lomond is basically a tale of two distilleries, the first of which was established in 1814. The precise date of its closure is currently unknown due to a lack of official records, although it is generally agreed upon that the distillery was short-lived.

The Loch Lomond Group oversees the labels of Loch Lomond, of course, as well as Glen Scotia, Littlemill, and other spirits. As a label, Loch Lomond is undergoing the kind of brand revitalization that traditionally comes with acquisition. The label currently offers a variety of single malt, single grain, and blended Scotch whiskies, and the portfolio can be a little confusing to navigate. Here, we will focus on three bottles from their current lineup.

Loch Lomond Reserve is a blended Scotch whisky, meaning it is a blend of single malt and grain whiskies. It is bottled at a standard 40% alcohol by volume and features no age statement.

Palate: Soft, sweet, and very, very light all the way through. The mouthfeel is quite thin. At 40% ABV, the dram feels quite watered down to me. So much so that my glass tasted as though it had been left on a table with an ice cube in it overnight. It’s off-putting, to be honest. Muted flavors of cream soda, ginger candy, and grapefruit juice. The finish is almost non-existent, again, in a disappointing fashion.

Sipping this whisky as bottled is, in a word, underwhelming. There is a distinct lack of complexity, but moreover there isn’t much flat ground on the thin surface to really dig into. As far as mixers go, Loch Lomond Reserve is simply unnecessary. As a sipper, it is watery mess of disappointment. Perhaps they forgot the “D” on the end of Loch Lomond Reserved.

Loch Lomond Single Grain is made using 100% malted barley, which may run contrary to expectation. While it is true that many single grain whiskies are produced using grain other than barley, malted barley can also produce a single grain whisky when it is distilled in a column or Coffey still as opposed to a pot still. Such is the case with Loch Lomond Single Grain. This bottle is presented at 46% alcohol by volume and does not feature an age statement.

Nose: Notes of dry apple cider early on. The nose turns grainy, spicy, and a little prickly as the dram settles in the glass, opening to notes of balsa wood, lemon zest, cardboard, bandages, strawberry soda, and ground cinnamon. This may not read like the most appetizing lineup, but the nose is actually a little interesting.

Palate: Sweet notes right up front with spice following right behind. I am getting strawberry mock chicken, specifically a very particular veggie chicken dish from a Chinese restaurant in Salem, Oregon. That may be a difficult reference to relate to, but I can say it is a mix of very sweet and some decent spice. It’s also reminiscent of strawberry ice cream, italian soda, tonic water bitterness, maraschino cherries. The sweetness takes over the longer the dram opens in the glass. Not as rough as I was anticipating. One must have a sweet tooth to really chew through an entire serving on its own. The finish is a flash of a burn with lingering sweet notes of, again, strawberry.

This single grain offering from Loch Lomond is oddly entertaining to me, kind of like when a grandmother raps in a movie. Clearly, the dram is best suited to mixing, yet as a stand alone it offers some intricacies (namely strawberries) which are harder to come by in your standard mixer price point.

Loch Lomond Inchmurrin Madeira Wood Finish is part of the larger Inchmurrin Island Collection. Other entires to the series feature 12- and 18-year age statements, whereas this entry features none. The collection is named for the largest island in Loch Lomond, Inchmurrin. This bottling is non-chill filtered and bottled at 46% alcohol by volume.

Appearance: Dark golden to mahogany with flashes of red around the periphery. Medium legs.

Nose: Tart, almost sour nose. A slight burn on the nose. Pretty lively, especially in this lineup. Loud oak notes present themselves within a minute or two in the glass. Slightly syrupy nuttiness, like a pecan roll. Honeydew, white pepper, and then the oak just takes over completely. Note of antique stained wood furniture wax.

Palate: A bit of licorice mingling with bolder notes of salted prunes, bitter chocolate, red grape juice, ground pepper, espresso shavings, and grapefruit. There are some flashes of vegetal funk that are really distracting amid a thin, watery mouthfeel. The finish is an easy transition, with the bitter and peppery notes overtaking the alcohol burn.

This whisky tops out at “okay,” and only occasionally. There is another very unsatisfying aspect to this whisky that reminds me of the Reserve. It feels old as opposed to aged, as if even my freshest pour had spent too much time in the glass. There are times when cask influence enhances and amplifies the inherent qualities of a dram. Here, it feels like masking similar to dumping ketchup on a steak.

Well, I am caught between a rock and a hard place. You see, I was raised by parents who taught me that if I didn’t have anything nice to say that I shouldn’t say anything at all, but I also have editors who insist on having reviews made of words. I don’t think they would be satisfied with merely the sound of a sad trombone, though I do think it gets the point across beautifully.

For my experience, the highpoint in this particular lineup happened to be the the middle level in terms of price. The Single Grain offering is the only dram of the three which really brought anything of note to the table, which was unexpected. I am not exactly sure what is going on at Loch Lomond, but I would be inclined to find it alarming if only these whiskies were interesting enough to be categorized as such. I can’t say I am looking forward to a return visit.