There’s a new offering from Nick Offerman via Lagavulin Islay Single Malt Scotch, just in time for Father’s Day. In fact, for all the wisdom Offerman carries, he has one man to thank … his dad, Ric. Nick said he always held Ric’s advice in the highest regard, and you can see that in the father-son’s Lagavulin: My Tales of Whisky Father’s Day videos online.

And with that, this year Nick Offerman, according to marketing information from Diageo, decided to embark on his most ambitious journey yet to create a Father’s Day gift worthy of the original Mr. Offerman’s approval. In time for World Whisky Day, and just in time for their Father’s Day tradition, the Offermans are inviting everyone to pour a dram of the newest release that’s courtesy of the relationship between Nick Offerman and Lagavulin Islay Single Malt Scotch Whisky … the Lagavulin Offerman Edition: Guinness Cask Finish.

The limited-edition, 11-year old Lagavulin was finished for four months in former Guinness beer casks from the Open Gate Brewery in Maryland. This offering is the second iteration from Nick Offerman and Lagavulin following the launch of Lagavulin Offerman Edition Aged 11 Years in 2019. 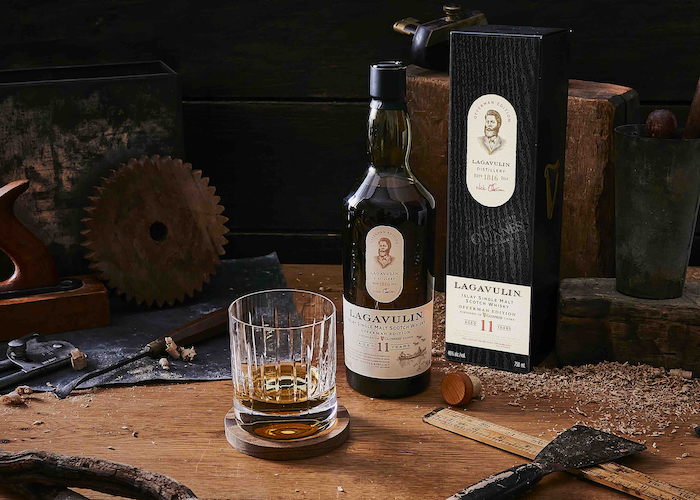 “The opportunity to collaborate on this truly sublime, smoky giggle-juice renews my gratitude for the simple things in life, like a father’s love, and the good manners he taught me,” said Nick Offerman in a prepared statement.

Lagavulin and Nick Offerman’s partnership began in 2014 with the introduction of the Lagavulin: My Tales of Whisky series. Ric has appeared in various spots over the years, showcasing everything from his master woodworking skills to his insistent preference for medium-rare steaks. The entire Lagavulin: My Tales of Whisky series can be viewed here.

Lagavulin Offerman Edition: Guinness Cask Finish has limited official tasting notes that make mention of a ‘sweet peat’ through the combination of the intense peat and charred wood notes of Lagavulin with the roasted coffee, dark chocolate and caramel notes from the Guinness casks. The limited-edition single malt retails for $79.99 USD.

If you don’t know, Nick Offerman is an actor, writer and woodworker, best known as the character of Ron Swanson on the long-running NBC comedy Parks & Recreation, Karl Weathers in the acclaimed FX series Fargo, the co-host and executive producer of NBC’s Making It, and in the role of Forest on FX’s DEVS.

Offerman has penned four New York Times Bestselling books: Paddle Your Own Canoe, Gumption, Good Clean Fun, and most recently The Greatest Love Story Ever Told, written with his wife, Megan Mullally. In his spare time, he can be found at his woodshop in Los Angeles building hand-crafted items ranging from fine furniture to canoes to ukuleles.

54
Shares
12.3k
Views
Share on FacebookShare on TwitterGet Our Newsletter
Cheers to the Dads! Personalize a bottle of his favorite whiskey to create a modern gift for the modern man. Use code: FATHERSDAY20 for $20 off your next order of $100 or more at ReserveBar