Editor’s Note: This whisky was provided to us as a review sample by Lagavulin. This in no way, per our editorial policies, influenced the final outcome of this review.

Over the past few years, we have seen too many celebrities getting into the spirits industry. However, of all the celebrities to do so, the best is simply Nick Offerman. Offerman is the wickedly talented brand ambassador for Lagavulin. In 2019, the budding friendship was solidified with the unveiling of the Lagavulin Offerman Edition.

Most people know Nick Offerman from the hit show Parks and Recreation ,where he plays Ron Swanson, the director of the Pawnee parks department. Offerman puts tidbits of his own life into the character. His love of woodworking and Lagavulin 16, for example. Lagavulin has used Offerman’s talents in their My Tales of Whisky videos. If you don’t like to drink alone, then I suggest you check out the “Yule Log” video of Offerman sitting silently drinking Lagavulin.

“I have travelled the world and sampled many attempts at pleasing nectars, but it is solely this distillation of Islay; a tiny, charismatic Scottish isle, that has claimed my palate. Yea, and my heart into the bargain.” – Nick Offerman

This quote on each bottle of Lagavulin Offerman Edition perfectly sums up the collaboration. It shows the great care and love Offerman has for the whisky and the traditions of Lagavulin. You can also see his attention to detail in the box copy, which makes me eager to taste this 11-year-old Lagavulin to see if it really is like a “top shelf brass band…blowing smoky jazz.” 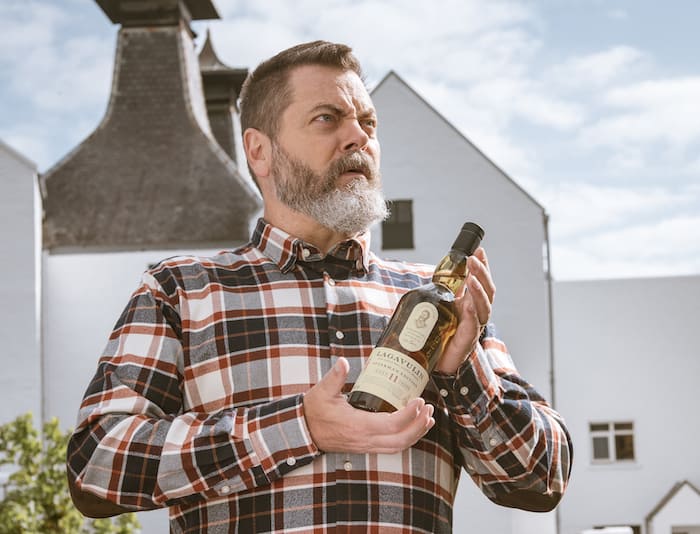 Nose: The peat smoke is upfront, but it is not a big slap in the face; it remains subdued in the background as you pick up the smell of fruit cake. Pear and green apple stand out more, but I find a lingering smidge of perfectly ripe yellow banana. Citrus zest and lemon grass come in waves. Just before the finish is a mix of jasmine and black tea; Earl Grey or English Breakfast. The end of the nose is vibrant with the skins of nectarine and hard white peach.

Palate: The peat is robust at the beginning, and there is a quick burn, but the intensity dissipates fairly quick. The mouthfeel is creamy and soft, yet somehow feels light and clean. The highlight is the taste of butter tartlets similar to the kind my great grandmother used to make. While apple and golden raisin are present, the baking spices are minimal. The whisky is slightly tannic and herbal. There is a hint of sweetness that dances with a cigar ash and peppercorn for the finish.

The 11-year-old Offerman Edition from Lagavulin, is a lusty Islay that will make you long for more than one dram. The barrels were meticulously selected, and Nick Offerman's input isn't just a half-assed attempt to slap his name on a bottle of Lagavulin. It's complex and each taste with reveal something new.

However, it feels familiar all at the same time. For me, the Lagavulin Offerman Edition is everything I want in a scotch all in one bottle. I hope it sticks around, and I hope for more collaborations between Lagavulin and Nick Offerman. Now go get yourself some, I promise you're gonna enjoy it.