The Rosebank distillery in Scotland was once known as “King of the Lowlands” and considered a top tier whisky making operation. Shuttered by Diageo in 1993, it eventually came into the hands of Ian Macleod Distillers, who set about on an ambitious plan to restore Rosebank to its former glory. A step in this direction occurred earlier this year with the release of a couple of single cask bottlings and now, in an even more major step forward, its first global single malt offering under its new owners has been announced.

The new Rosebank 30 Year Old, according to those behind it, is the first in what will be a series of annual, limited edition releases. This particular expression was laid down back in 1990, just a few years ahead of the distillery’s closure. It slumbered for some three decades, being matured in 62% refill sherry butts and 38% refill bourbon hogsheads, before recently being bottled non-chill filtered at 48.6% ABV. 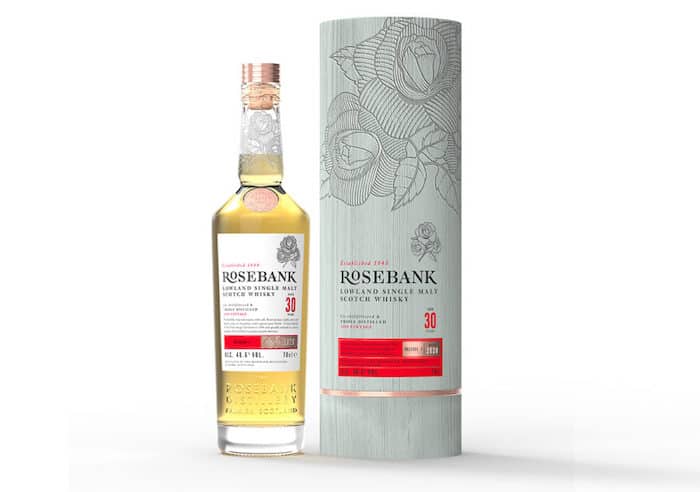 “The first global release of Rosebank 30 Year Old is a truly iconic moment for the distillery,” said Robbie Hughes, Group Distillation Manager for Ian Macleod Distillers, in a prepared statement. “It has matured in 62% refill sherry butts and 38% refill bourbon hogsheads for decades, patiently waiting to be awoken, and delivers layers of incredible flavour that you won’t find in other whiskies.

“What makes Release One so exciting is that we’re giving Rosebank fans the chance to join us on this monumental journey over the next decade, as we revive the iconic distillery. With a chance to ‘bank’ exclusive access to next year’s release, we’re not only inviting them to become part of Rosebank’s legacy, but to become part of Rosebank’s family.”

What Hughes is referring to by “bank” above is that, noted the brand, “the the first 200 people to scan the QR code on the neck of their Release One bottle will be given the opportunity to enjoy a dram of Release Two at their nearest high-end, luxury bar in 2021 as well as a chance to purchase Release Two before anyone else through an early purchase link.”

As it stands now plans call for Rosebank 30 Year Old, Release One, to have a global release of just 4,350 bottles, each pricing £1,650, or almost $2,200 USD. Limited official tasting notes suggest that, on the nose, this whisky is “soft and creamy with layers of caramel wafer, vanilla and nutmeg. On the palate, there’s a wonderful balance of gentle syrup, pear and pleasing oak spice. The finish lingers with candied violets, orange and faint mint.”

As a side note, when Rosebank does eventually officially reopen it will bring to its hometown of Falkirk some 25 full time jobs and around 50,000 projected visitors a year. It will also “offer a wide range of distillery tours, with some featuring the very last drams of Rosebank distilled prior to the 1993 closure.”

73
Shares
7.9k
Views
Share on FacebookShare on TwitterGet Our Newsletter
Cheers to the Dads! Personalize a bottle of his favorite whiskey to create a modern gift for the modern man. Use code: FATHERSDAY20 for $20 off your next order of $100 or more at ReserveBar