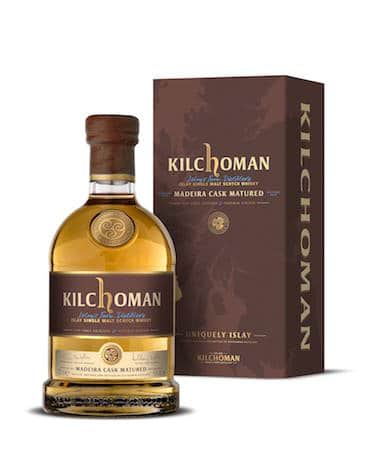 Scotland’s small Kilchoman distillery, in celebrating its 10th anniversary this year, has been putting out a number of popular bottlings of late from its Islay island location. Ones we have taken note of include a related anniversary expression, its first ever seven year old whisky and the fifth iteration of its 100 percent local barley only Scotch. Now comes a rather fascinating offering which was matured in first fill ex-Madeira barrels.

As we touched on earlier in the week, whiskies matured in fortified wine casks, such as the Kilchoman Madeira Cask Matured, take on rather interesting characteristics in their taste profiles. The distillery, for this release, drew Scotch from just 17 of these special barrels that were filled with fresh make spirit back in 2011.

What’s resulted is a limited edition bottling that has a strength of 50% ABV and is available globally in only 6,100 bottles. Kilchoman’s founder Anthony Wills said of the Madeira release that it is “a break from the norm for us, it represents a bit of an experiment with full maturation rather than simply finishing whisky in casks like Madeira.”

Full maturation means that the impact of the cask is that much greater, the challenge is to ensure the whisky remains balanced and the influence of the Madeira cask is integrated with that of the Kilchoman spirit.”

Tasting notes for the Kilchoman Madeira Cask Matured are below from the distillery and, should you want to track down a bottle, it is retailing for around £69 ($105 USD).

The nose is powerful with lemon and citrus notes and the palate has smoke right away along with sweet, nutty milk chocolate character. There is a heavy textured finish which drifts away to dry smoke with oakiness.

83
Shares
212
Views
Share on FacebookShare on TwitterGet Our Newsletter
Get The Glenlivet 18 Year Old at ReserveBar. Shop now!