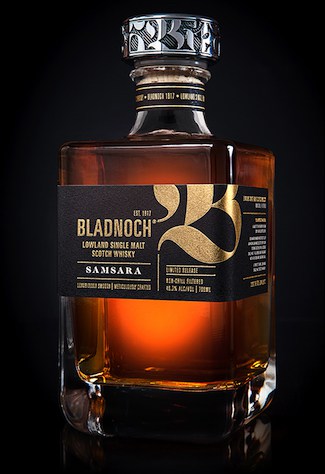 Bladnoch Distillery in Scotland has a long and storied history as one of the Lowlands’ top whisky producers. It fell on hard times though at one point like so many other Scottish distilleries, eventually ceasing production within the last decade. Bladnoch’s fortunes have reversed again in more recent times however, with a new owner at the helm shepherding in a rebirth as well as a fresh trio of new single malts.

Bladnoch was purchased in 2015 by Australian businessman David Prior, who has a desire “to restore the heart and soul of the local community and reinvigorate the brand.” To this end, the three new single malts are all being promoted as a celebration of bringing the distillery back. They include Samsara (46.7% ABV), a non-age statement expression; Adela (46.7% ABV), a 15-year-old whisky matured in oloroso sherry casks and Talia (49.2% ABV), a 25-year-old single malt which was matured in American new oak barrels.

Plans initially call for these three whiskies to be released in Australia, with a more limited global release happening later in the year. Samsara, Adela and Talia price for around USD $115, $135 and $265, respectively.

“This a moment I hope all single malt whisky drinkers from around Australia will enjoy because Bladnoch is back,” said Prior in a prepared statement. “I’m delighted for the Bladnoch team in Scotland who’ve kept the distillery going until I was fortunate enough to purchase it. This moment is as much for them as it is for our loyal customers.”

Single malt Scotch whisky is special to me because of the shared appreciation it attracts. I want Bladnoch to be a brand that people discover, share and remember. We have great plans for Bladnoch and we know this rebirth of the brand is just the beginning. We are currently investing significantly in the distillery to plan for future growth and ensure continuity of ownership.“