The Dublin-based distillery’s series launched in 2019 and celebrates what’s described as the global renaissance of Teeling, Dublin and Irish Whiskey. The fourth bottling in the Renaissance series comes after the first three award-winning releases, which earned gold awards at both the 2020 International Wine and Spirits Competition and the 2020 Irish Whiskey Masters.

The new release is an 18-year-old Single Malt that was originally aged in ex-bourbon barrels for over 16 years before being finished in ex-red Pineau des Charentes fortified wine casks. This adds what’s described as a pressed grape and candied dried fruit flavor like apricot and pineapple to its character. 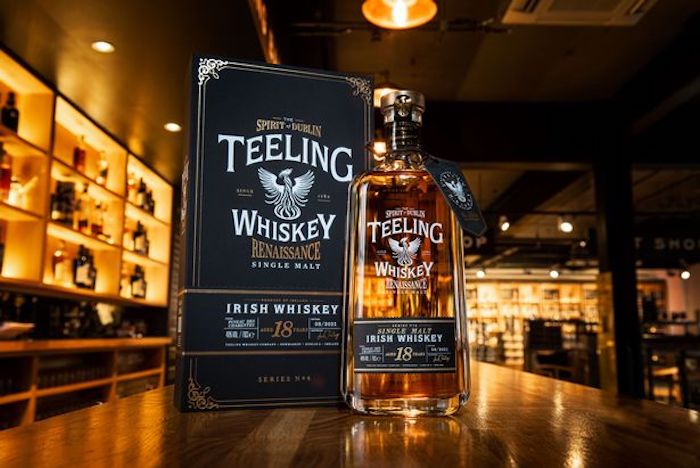 It was limited to just 9,000 bottles and bottled at 46% with no chill filtration.

“We are honoured to be launching the fourth release of our award-winning Renaissance Series,” Jack Teeling, Founder and Managing Director of Teeling Whiskey, said in a prepared statement. “These releases are a celebratory bottling series that mark the true renaissance of Dublin as the epicentre for world-class, city-based whiskey distillation. These whiskeys have established themselves as the golden standard of Irish single malts over the last two years.”

The offering is bottled in a unique decanter bottle and is available at the Teeling Whiskey Distillery, the Celtic Whiskey Shop, Irishmalts.com and independent off-licenses nationwide at  €140.00.