Teeling Whiskey out of Ireland has mastered the art of finding and dolling up some of the oldest Irish whiskey stock out there. A few years back we witnessed the release of a 30-year-old, believed to be the oldest released to date. That has now been topped, however, with word of the Teeling 33-Year-Old, alongside a slightly younger 24-year-old expression.

The Teeling 33-Year-Old, according to the distillery, was distilled in 1983 and aged exclusively in two ex-bourbon barrels for over three decades before recently being bottled at 42.9% ABV. Only 275 bottles of it were produced, each costing €3,500, or close to $3,750 USD. It is presented inside a rather stunning wooden box and comes with a special commemorative booklet that’s been printed and bound by hand by one of the oldest Irish bookbinders still in business. 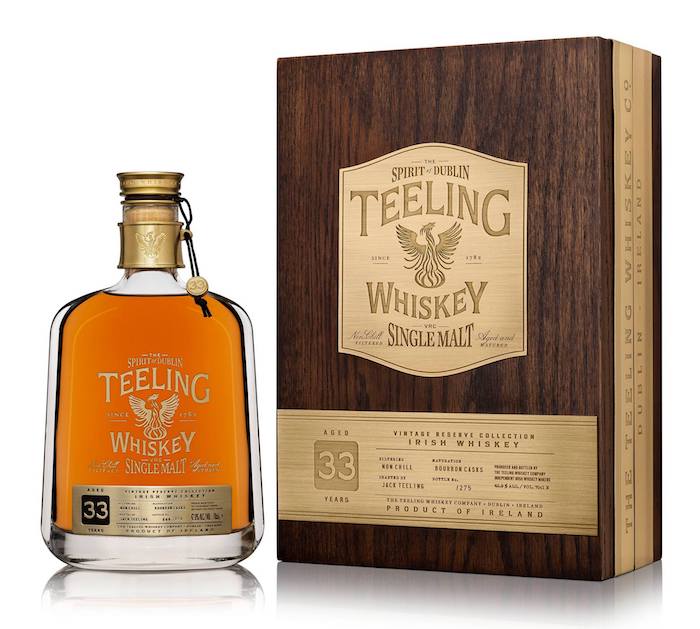 The Teeling 24-Year-Old, meanwhile, was first distilled in 1991 before being matured in ex-bourbon casks and then allowed to marry in ex-Sauterne wine casks. The dual maturation is said to have imparted “an extra depth of fruit flavours that perfectly complement the hint of smoke derived from the inclusion of a small portion of Peated malt as part of the original ingredients used in production.”

“We are extremely proud to be able to release some of the oldest ever bottlings of Irish Single Malt with our Vintage Reserve Collection,” said Jack Teeling, founder of the Teeling Whiskey Company, in a prepared statement. “These offerings are central to our goal to help drive diversity in Irish whiskey by introducing interesting and unique small batch bottlings. There is nothing else like these Irish Single Malts on the market and represent a rare piece of Irish whiskey history in each bottle.”