Redbreast Single Pot Still Irish Whiskey is a beloved brand by those who really love the Irish whiskey category. For those who are extreme fans there’s The Birdhouse, an online, private members’ club that gives its members access to insider Redbreast benefits. One of these is having first dibs at the now what seems to be annual Dream Cask release, a very special series of one off Redbreast bottlings. The 2019 variant has been announced, and for those who love Pedro Ximénez sherry cask aged whiskey, they are in for a treat. 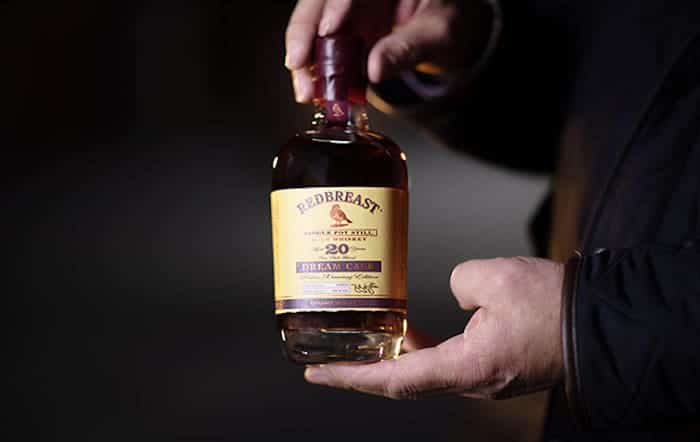 The Redbreast Dream Cask Pedro Ximénez Edition, according to those behind it, “was created from a vatting of bourbon, Oloroso sherry and Pedro Ximénez sherry casks which has been re-casked and finished in a specially selected Pedro Ximénez cask.” It is a 20 year old expression (up to 33 years in age in the blend), and was created by Redbreast Master Blender, Billy Leighton, in collaboration with Redbreast Blender, Dave McCabe.

More specifically, it is made up of the following whiskeys, which represent a cross-section of single pot still distillate styles and maturation techniques:

“Rather than try to seek out another extraordinary cask from the Midleton inventory like the inaugural Redbreast Dream Cask,” said Leighton in a prepared statement, “we set out to create a new Redbreast Irish whiskey like you have never tasted before. The coming together of three exceptional casks, originally destined for Redbreast 21, and a rare Pedro Ximénez butt is a first for Midleton, and the careful balance of sweet, spice and sherry flavours offers a new and complex take on the classic Redbreast Christmas cake flavour profile.”

Bottled at 52.2% ABV, plans call for just 924 bottles of this whiskey to be available to members of The Birdhouse on May 27th for €380, or around $425 USD. Sales of it, much like last year’s 32 year old Dream Cask, are likely to go pretty fast. If you decide to try and throw down for a bottle, make sure to take note of where Redbreast ships when you are buying it online – not all countries are listed unfortunately. If you aren’t able to secure a bottle that way, try watching some of the whisky auction sites in coming months – a few bottles will likely appear on the secondary market. As for official tasting notes, they are below from Redbreast for your consideration.