The Glendalough distillery, one of the up and coming among the new wave of craft distilleries out of Ireland, is set to bring to the American liquor retail market three of is expressions. These include a pot still whiskey finished in virgin Irish oak, a 17 year old and a 25 year old.

The first, the Glendalough Pot Still, is, according to those behind it, the distillery’s first pot still style offering. It was initially matured in ex-bourbon casks before being transferred into virgin Irish oak casks for a year. These casks were made from trees that Glendalough sustainably harvested themselves in the mountains surrounding the distillery.

As for pricing and availability, the Pot Still expression is now in general release for around $55 per 750 ml bottle. It should be noted as well each bottle is numbered “ back to the batch, the cask, andright back to the tree it came from. A neck tag on each bottle directs you to www.glendaloughdistillery.com/irishoak where you can input the numbers from your bottle and see a short, personalized film of the specific tree being felled and the actual cask being coopered.” 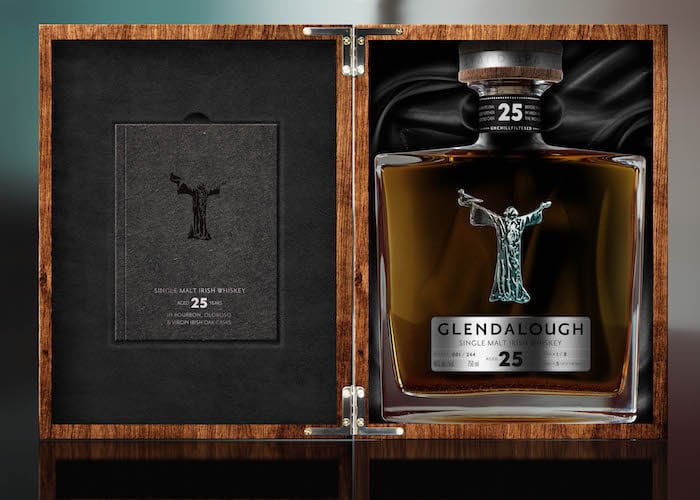 The older expressions, meanwhile, have gone in two different directions in terms of finishing cask types and journeys. The Glendalough 17 Year Old is described as a numbered, single cask release that originally spent 15 years in a first fill bourbon cask that is said to have imparted “had vibrant, citrus notes over the long, sweet honey and vanilla you would expect.”

A further two years of being finished in Japanese Mizunara oak casks reportedly “brought the unexpected. The smoothness from the initial aging carries you through the depth and intensity of the wood spices, incense and earthiness within, while the sweetness of the bourbon cask creates harmony with these drier, woodier notes.”

The 17 year old, 0f which 3,000 bottles are available in the United States, prices around $300 a bottle. More expensive then this one is the Glendalough 25 Year Old, which sees 752 bottles coming here for around $500 each. What you have here is what’s said to be “the first ever Irish single malt whiskey to be aged in Irish oak casks.” More specifically, it was finished in this wood type following initial aging periods in American oak bourbon and Spanish Oloroso sherry casks.

Interestingly, these Irish oak casks are said to be “the first casks made from the first trees felled by Glendalough in the woods surrounding their distillery.”