Disaronno Brings The Busker Irish Whiskey To The United States

Disaronno—the American company that imports its namesake Italian liqueur and other products for its parent company, Iliva Saronno SpA—has released into the United States its new Irish whiskey offering, The Busker, which we first wrote about earlier this year. This is a line consisting of all four types of Irish whiskey—single grain, single pot still, single malt, and blend (which they call “triple cask triple smooth blend”).

“While The Busker honors its Irish heritage, it encourages consumers to go beyond the limitations and lines of history with its four new Irish Whiskeys,” noted the brand. “The Busker is perfect for urban wanderers, for those who are flavor-curious, eager for inspiration and a quality Irish whiskey like no other.” 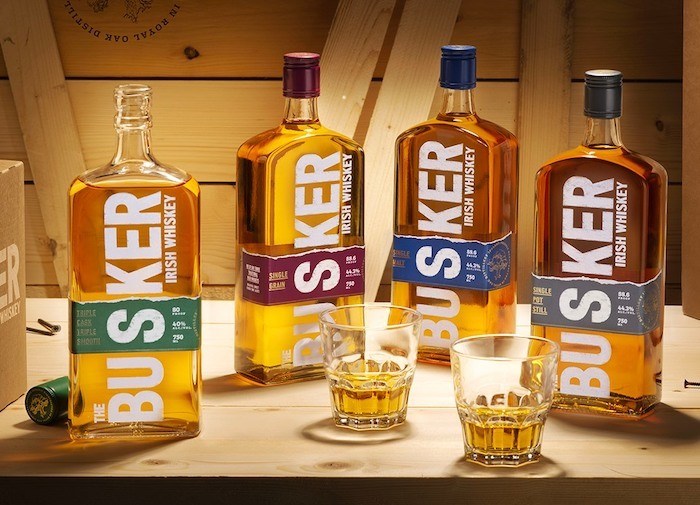 These whiskeys were matured in a range of different barrels, including bourbon, sherry, and marsala wine casks; the company highlights the marsala casks in particular, which come from Cantine Florio, one of the oldest wineries in southern Italy.

All four whiskeys were produced at the Royal Oak distillery, situated on an 18th-century estate in County Carlow, which is said to be the only Irish distillery that makes all three categories of Irish whiskey. “We take the rich history and heritage of Irish distillation and combine it with innovation and creativity at our state-of-the-art Royal Oak Distillery,” said Woody Kane, Royal Oak Distillery ambassador, in a prepared statement. “Not only is The Busker offering a beautiful range of whiskeys with fantastic quality that we stand behind, we are adding a product unlike anything else to the marketplace. The Busker is a great whiskey to drink with friends while we come together and share our stories.”

The Busker Blend Triple Cask Triple Smooth is a blend of the other whiskeys in the range, including “a high percentage” of the single malt and single pot whiskeys, with some single grain as well. Altogether, this expression was finished in three different casks—bourbon, sherry, and marsala—and the producers say it “brings a new meaning of smoothness to Irish Whiskey.”

There’s not much information on what these whiskeys actually taste like, but the company notes that each one “boasts an unmistakable taste profile, with nuances ranging from vanilla and oak, to rich spicy notes.”

The single grain, single malt, and single pot still expressions are all being sold for around $30; the blend is available for around $25. All four are available at stores nationwide and online.