About 15,000 bottles of the Batch 6 expression were produced with an all-Port cask maturation, and another thousand cask strength bottles are available as well.

Priced at €70 per 70cl bottle, the new single malt whiskey comes in at 93 proof, and is available now at DingleDistillery.ie, IrishMalts.com, Celtic Whiskey Shop and across independent off licenses nationwide in Ireland. The cask strength is priced at €150. 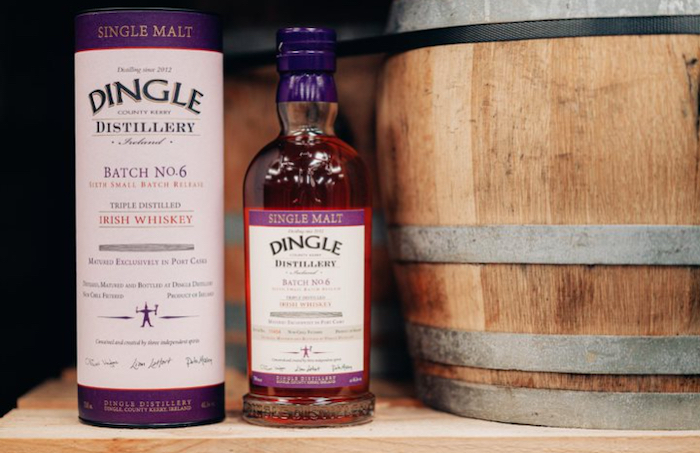 Elliot Hughes, managing director at Dingle Distillery, said in a prepared statement the launch of Single Malt Batch 6 is of particular interest to those who have followed their journey since the first batch released in 2016.

“But also for those who want to experience the art of the Dingle Whiskey distilling process through the final Single Malt Batch in the series. … We are really proud of this launch and can’t wait for whiskey fans to try it.”

Dingle’s Master Distiller Graham Coull said, “Our Single Malt Batch 6 is fully matured exclusively in Tawny Port casks, and it’s a great example of the interaction between single malt spirit and fortified wine. A whiskey with multiple layers of sweetness and a well-balanced depth of flavor.”

You’ll find official tasting notes below as well as information on the previous bottlings in the Batch line up.

Single Malt Batch 2 – Single Malt Batch 2 was created through the marriage of specially selected Sherry (Pedro Ximenez and Oloroso) and Bourbon casks. The second in the Single Malt series was released in 2017 and had 6,000 bottles produced with an ABV of 46% whilst the distillery’s first Pot Still Whiskey had 600 bottles available worldwide.