The innovation here for this particular brand is it whiskeys are said to be the first to be finished in seaweed charred casks. Currach’s first expression was made with Irish Atlantic Kombu Kelp seaweed, a brown seaweed varietal, that launched in March of 2020 and is now sold in more than 20 international markets worldwide.

The same process is used to create both expressions, the only variance being the seaweed used to char the individual casks. The flavors from both products are different, yet share the same single malt DNA while having what’s described as sweet, savory and maritime qualities of their own. 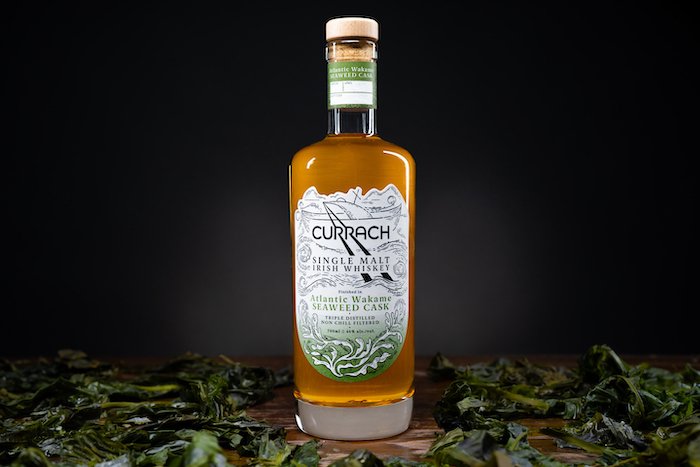 Made from 100 percent Irish malted barley, Currach Wakame Cask is a triple-distilled single malt Irish whiskey, initially matured in first fill American oak ex-bourbon barrels before being finished in Atlantic Wakame seaweed charred virgin American oak casks. It is non-chill filtered, with no caramel coloring, and is bottled at 92 proof. The initial batch is limited to only 3,000 bottles.

Sustainably hand-harvested off the wild Atlantic coast of County Clare, Wakame seaweed is 100 percent naturally grown and organically certified. Wakame, a green seaweed varietal, is both rare and seasonal, and considered to be the king of seaweeds.

Wakame seaweed grows in the extreme lower shore on wave-battered rocks and in rock pools along the coast of Ireland. It grows in the winter months and is harvested in mid-spring/early summer when it is at its nutritional prime. Wakame is known for its low light limitations and therefore does not grow in the mid-summer months.

Wakame has a subtle, but distinctive taste and texture. It has what’s described as a briny, salty, umami flavor with a degree of sweetness. It’s traditionally used in salads, soups, snacks, and as a seasoning, particularly in Japanese and other Asian cuisines.

Seaweed harvesting employs about 400 people in Ireland, mostly on a part-time basis, as it is very weather and tide dependent. Fourth generation seaweed harvesters, the Talty Family, curate the seaweed for Currach Single Malt Whiskey. All their seaweeds grow naturally off the Wild Atlantic Way in Co. Clare. Hand-harvested in season to provide optimum nutrition, their seaweeds are organically certified. The harvesting waters are also tested quarterly to ensure they are of the highest quality.

Patrick Shelley, founder of Origin Spirits, said their vision with Currach was to create a single malt Irish whiskey inspired by the various elements of the Irish terroir.

“We are fortunate to have some of the best malted barley in the world and our coast yields an abundance of organic and sustainable seaweed. The union of these elements together in a whiskey is a world’s first,” Shelley said in a prepared statement. “Currach Atlantic Wakame Cask is a whiskey of sensory paradoxes. At its heart, it is a smooth Irish single malt but with the subtle briny and maritime characteristics often found in Scotch, thus giving it a uniquely rich, multi-layered and complex character.”

The distiller’s tasting notes find the Currach Atlantic Wakame Cask to have an enticing nose, as sea salt and rye cracker aromas give way to a golden caramel sweetness, backed by vegetal hints with a touch of iodine.

On the palate, the distiller’s notes find cracked pepper and oak spice, followed by briny yet sweet maritime notes, along with white wine fruitiness, butterscotch and herbal green tea undertones. It finishes with a touch of licorice and umami and maritime character.

It’s available now from select retailers for 60€ a bottle. For more information, check out http://currachwhiskey.com.