After a tough year for the distillery because of the pandemic, Copeland still released its first whiskey, marking its entry into a third spirits category. The distillery already introduced a rum range in November 2020 during the pandemic and it already had a successful range of gins. The distillery also is producing malt and pot-still whiskeys that are currently undergoing the maturation process. Those are expected to launch in 2024.

The Copeland Distillery took on a 125-year lease at an abandoned cinema in the harbor town of Donaghadee in 2019. 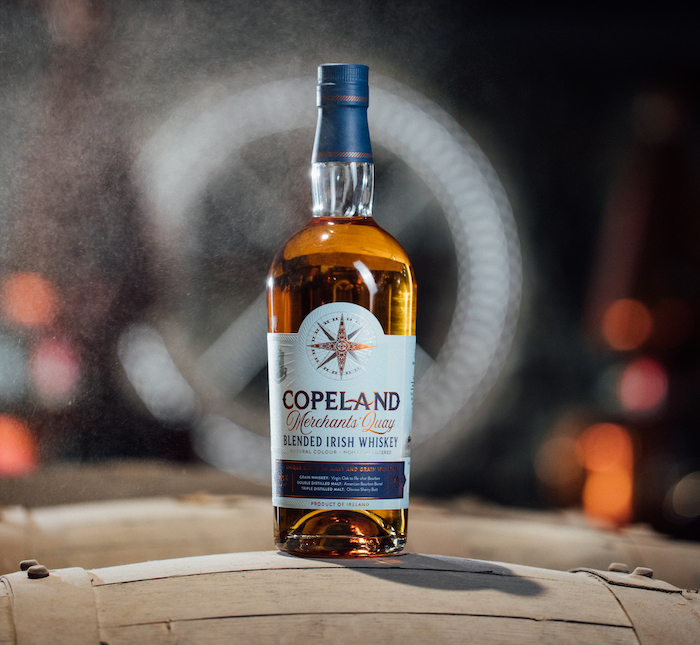 “[It] is a huge milestone for all of us here at the Distillery. Merchants’ Quay, our first whiskey and only a taste of what’s to come, will support our goal of building credibility and establishing pedigree in the whiskey market in advance of the launch of our single malt and pot-stilled products which are currently being distilled and aged at the Distillery,” Founder of The Copeland Distillery, Gareth Irvine, said in a prepared statement.

Irvine collaborated with Brian Watts, Master Distiller at The Great Northern Distillery to workshop the blending process for Merchants’ Quay. The result was an impressive and unconventional blend that consists of three different whiskeys matured in four casks.

First, a grain whiskey matured in virgin oak casks and finished in re-char bourbon casks has been carefully selected to join a double-distilled malt, aged in American bourbon barrels, while a triple distilled malt aged in Oloroso sherry barrels finishes the unique blend.

The end result is an amber-colored whiskey with an enjoyably sweet aroma of toffee apples and dark berries are layered above familiar undertones of vanilla and clove spice before a mild hint of fresh cedar hits, the distillery says. On the palate, Merchants’ Quay is refreshing, with fruity orange notes and honey whilst its finish is a contrasting yet complementary dry, toasty oak.

“We have ambitious plans when it comes to whiskey, as part of our long-term goal of creating a world-class, varied portfolio of spirits that represent a taste of Northern Ireland’s craftsmanship and history,” Irvine said. “There is a growing demand for Irish whiskey, at home and internationally, and we are already seeing huge interest across Europe, Asia and North America in The Copeland Distillery’s growing range.”

“As with all of our products, it is taste, innovation and history that are important to us and Merchants’ Quay celebrates the connection that Donaghadee has had to maritime activity in Northern Ireland. The Copeland Islands and Donaghadee harbour, were busy trading ports for hundreds of years where ships have been launched, and casks landed, over the centuries,” Irvine said.

Shares
2k
Views
Share on FacebookShare on TwitterGet Our Newsletter
Read More Whiskey News
Whiskey Reviews: The Dublin Liberties Murder Lane And Oak Devil
Cheers to the Dads! Personalize a bottle of his favorite whiskey to create a modern gift for the modern man. Use code: FATHERSDAY20 for $20 off your next order of $100 or more at ReserveBar