The Crown Royal Noble Collection is considered a higher end variant on the traditional Crown Royal Canadian whisky bottlings, showcasing a series of limited edition releases such as a wine barrel finished offering. For what’s now considered the third release, what has come to market is said to be the oldest age-statement release from Crown Royal to date that also looks to have gotten a renaming, much like one of its lower priced kin.

The new Crown Royal 13 Year Old Blenders’ Mash, according to those behind it, was aged in charred, new American white oak for a minimum of 13 years before being bottled at 90 proof. It was made from a a corn-forward mash bill of 60 percent corn, 36 percent rye and 4 percent barley malt, and is set to price for around $60 a bottle. 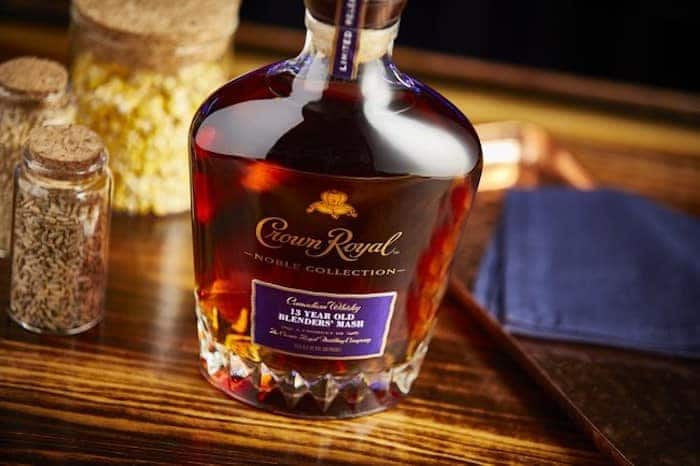 “We’re proud that our focus on experimentation continues to elevate Canadian whisky,” said Nicola Heckles, Brand Director of Crown Royal, in a prepared statement. “Innovation is where our distillers truly thrive, and releasing offerings like 13-Year-Old Blenders’ Mash, which is inspired by one of the five whiskies that makes up the signature Crown Royal Deluxe, will bring much-deserved attention to the growing super-premium Canadian whisky category.”

Limited official tasting notes for the Noble Collection Blenders’ Mash suggest “a nose of orchard fruits and butterscotch with a hint of toasted oak” that “tastes of rich caramel, vanilla and toffee notes and has a warm finish that leaves you with a taste of lingering oak and smooth caramel.”

It should be noted as well this whisky looks to have been originally named “Bourbon Mash” in much the same vein as a lesser priced bottling from the Crown Royal Blenders’ Series. Given the word “bourbon” couldn’t be used in this way, that other whisky was required by the TTB to ultimately be renamed. It seems this looks to be the case as well with this bottling.