Last-Minute Bourbon Gifts to Get You Invited Back Next Year

Alhough it might sound crazy, it’s hard to point to one particular “bourbon heritage” during Christmastime in Kentucky. According to the Merriam-Webster Dictionary, heritage means “the traditions, achievements, beliefs, etc., that are part of the history of a group or nation.”

But frankly, bourbon is more like an expectation, akin to salt and pepper on a dinner table. You know it’ll be on the bar, at a table, in a cocktail or candy in a Kentucky home. It’s not heritage for us, it just is.

Part of my wife’s family heritage is to make enchiladas from scratch at Christmas. That takes effort and planning by a team of family members willing to work side-by-side for a couple of hours. There are stories tied to that tradition (not to mention revelations of good and bad cooking skills).

Not so for bourbon. It’s ubiquitous here, be it the best or the worst bottle stashed in a board room or a basement closet. It’s coming out, and you’re going to have some in some form during the holidays whether you even know it. 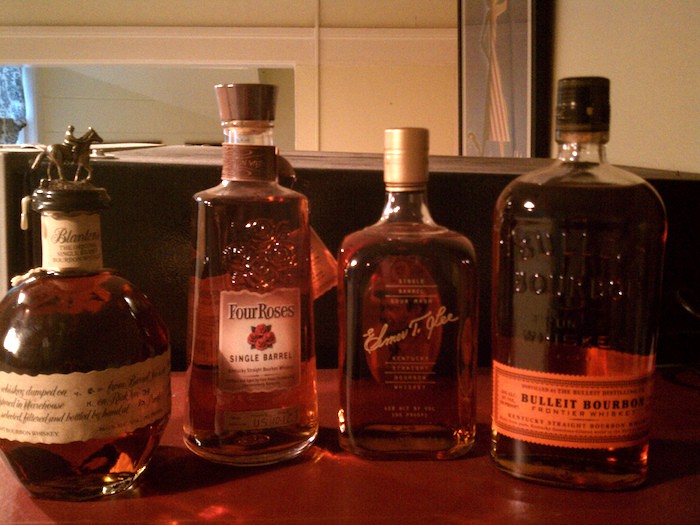 According to the guests Kentuckians invite to their homes, they’ll trot out bourbons specific to those palates and personalities. If that guest is well liked, he’ll see some rare stuff. In cases where relations are strained, it’s a bottom shelf event.

The flipside proves true, too: If you’re the guest, what you bring to the door says a lot about you as a friend or an aficionado. In other words, show up with a handle of Old Rot Gut, and you’re off the guest list next year. But present the hosts with a nice single barrel bottle, and they might surprise you with a pour of their own treasured stash.

My family of origin didn’t drink much, and what they did drink was never interesting. It’s sometimes called “boot bourbon,” but not because you kept the bottle secreted in a boot. The name comes from it being so low on the retailer’s shelf that you’re more likely to kick it by accident than bend over and reach for it.  So it was up to me to start my own bourbon traditions at Christmas. Someone’s got to do it, right?

I wish I had some bourbon stories to tell, but beyond sipping around a fire with friends, I haven’t many. I did hear an interesting one recently, though, from a friend, Chris Schreck, owner of Schreck Liquors in Louisville.

At the outset of the bourbon boom a few decades ago, Maker’s Mark was arguably the most highly sought-after bourbon in the U.S. And though the lust for it had cooled slightly in Kentucky in the late 1990’s and early 2000’s, Bill Samuels, Jr.’s relentless marketing was finally paying off outside the state.

According to Schreck, “people would come and buy 10 to 20 cases of Maker’s at a time—no kidding. Every year.” Schreck said. “It wasn’t for them. It was for gifts to give people that probably couldn’t get it.”

Hmm, 10 to 20 cases at a time. Not just one person, but many one persons. So let’s just say back then that a six-bottle case of Maker’s was roughly $190. That’s $1,900 to $3,800 in liquid love going to friends and clients. (Not sure about you, but I don’t have any friends or clients who send Maker’s out for stocking stuffers.)

Sadly, Schreck said, “You don’t see a lot of that anymore.” The new widespread popularity of bourbon and amazingly efficient distribution took care of that, as have changes in gift-giving policies at many companies.

I can, however, suggest a few last-minute bourbon gifts you can find easily anywhere in the U.S. Let’s start with a few bottles:

Old Forester Signature (100 proof): You cannot go wrong bearing a 750ml of this to a party. It’s as Kentucky a bourbon as bourbon gets, it’s affordable, easy to sip neat or on the rocks, and perfect for cocktails.

Henry McKenna 10 year Bottled-in-Bond: This is mid-priced bottle is just beautiful and elegant on the palate. I love it on the rocks.

Booker’s: Want to spend a bit extra and blow ‘em away? Can’t find a better boldness-to-dollars-spent ratio. Bring that to the hosts of a party and they’ll make you family.

Some good reads you can find at your local bookstore

Bourbon Empire: The Past and Future of America’s Whiskey, by Reid Mitenbuler. I listened to it earlier this year and loved it. It’s all about the business side of bourbon.

Bourbon Curious: A Simple Tasting Guide for the Savvy Drinker, by Fred Minnick. Want to learn how to taste this lovely stuff the right way? Get this guide and follow along.

The Home Distiller’s Guide to Spirits, by Steve Coomes. Yep, that’s me. Shameless promo, I know, but if you want to learn how to do it yourself—not that I’m promoting that—this book will tell you how. At the very least, it’s a cheap education in distilling that will increase your appreciation of the craft.

Bourbon cocktails for the holidays:

Everyone as their own eggnog recipe, so no need to revisit that here. Let’s keep it simple, especially if you’re entertaining guests and don’t want to be preoccupied with making complex cocktails.

Champagne and bourbon: No simpler than that, right? Elegant, too. Pour into a champagne flute 4 ounces champagne or sparkling wine and 1 ounce of 90-proof bourbon. Garnish with a lemon twist or orange twist and serve. Other versions of this I’ve seen call for a bar spoon of vanilla simple syrup, but to me that that addition subdues the drink’s dry finish.

The Seelbach: Step up to the legendary Seelbach cocktail, named after the famed Louisville, Kentucky, hotel from which F. Scott Fitzgerald got the ol’ heave-ho for drunken behavior. This cocktail is both simple and classy. The recipe below is set up as an evening drink, but you can back off to 1 ounce of bourbon, or less, for a morning brunch sipper if you like.

Procedure: To a mixing glass add ice, bourbon, Cointreau and bitters, and stir to chill. Strain mixture into a champagne flute or coupe, fill with champagne and garnish with orange peel twist.