The story of Willett Distilling could be a graduate-level course in Kentucky bourbon history. The sometime distillers, the sometime non-distilling producers operating out of Bardstown, Kentucky, have been credited with helping save Kentucky bourbon during bourbon’s decline. Operating as a non-distilling producer, Kentucky Bourbon Distillers (one of the many operating names of Willett) purchased bourbon from other distilleries, aged it in their warehouses, and bottled it as part of their extensive family of labels.

In 2012, Willett resumed distilling, and now, you can find Willett’s own rye whiskey and bourbon released as Willett Family Estate releases. Earlier this year, Willett released (only for sale in Kentucky) their bourbon as Old Bardstown Bottled-in-Bond. So Willett is now making its own whiskey, but most of their labels are still bottled from barrels made by other Kentucky distilleries.

Out of Willett’s sourced-bourbon brands, Noah’s Mill is a blistering 114.3 proof bourbon. When Willett originally released Noah’s Mill, it carried a 15-year age statement. But in these times of bourbon shortages, the age statement has dropped, and now people believe Noah’s Mill to be a blend of bourbon aged four to 20 years. 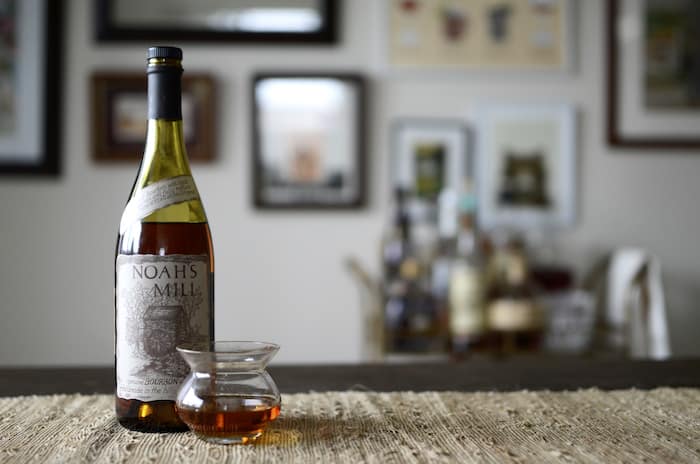 Vital Stats: As mentioned above, Noah’s Mill no longer includes a 15-year age statement, and it’s bottled at 114.3 proof. On a shelf, Noah’s Mill generally retails for $50 to $60. Because Noah’s Mill is made from sourced barrels, the mash bill is undisclosed. In fact, the final product includes (hearsay) bourbons of different mash bills, including bourbons with rye grain and wheated bourbons.

Appearance: In a Glencairn glass, Noah’s Mill appears as a medium honey brown. However, the bourbon appears darker in the green-glass tinted bottle.

Nose: Sharp notes of cinnamon and allspice jump out of the glass, and subtle notes of vanilla, yeast, and seasoned oak make an appearance underneath. For higher-proof bourbon, the nose is not overwhelming or unpleasant, but the youth of the bourbon is noticeable in the sharp spice notes.

Palate: The front of the palate reflects the nose with warm spice notes of cinnamon, mint, and allspice that blend with barrel notes of seasoned oak, toasted pecan, and burned sugar. In the mid-palate, the spice notes subside and the bourbon takes on more barrel flavor characteristics with soft notes of cream, caramel, and slightly bitter toasted pecan notes.

The medium duration and slightly dry finish continues the barrel driven flavor profile with seasoned oak, toasted pecan, and light cream with a touch of rye grain driven flavors such as mint and black currant.

In general, Noah’s Mill is a solid, higher proof bourbon offering. However, I can’t help but remember the depth of flavor found in the 15-year version that was readily available just a few years ago. The age statement dropped, but the price did not. If Booker’s bourbon wasn’t going up to $100 a bottle, I’d recommend it over Noah’s Mill. Even with the disappearance of Booker’s from the $50 to $60 price range, I’d still recommend Wild Turkey Rare Breed (and save about $20) or a Four Roses Private Barrel selection—both available at many good whiskey shops.

115
Shares
47.8k
Views
Share on FacebookShare on TwitterGet Our Newsletter
Get The Glenlivet 18 Year Old at ReserveBar. Shop now!