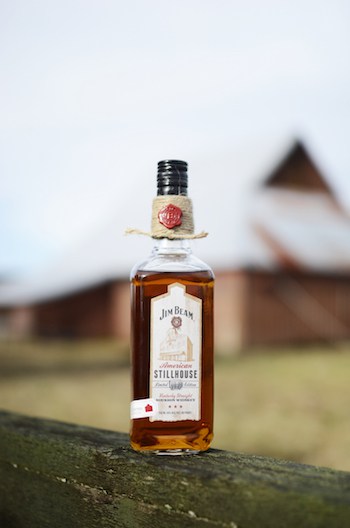 As a visitor center only release, very little information exists on the American Stillhouse releases. A bit of Internet digging reveals this Modern Thirst post for the 2013 release, in which the number of bottles went up to 7,500 and the price increased to about $40.

In addition, this spotlight feature on the creative boutique that works with Beam Suntory (Jim Beam’s parent company) includes a photo of the 2012 to 2014 releases of Jim Beam American Stillhouse Limited Edition bourbon. Notably, the 2012 to 2014 releases included a seven-year age statement, and these releases also included the release year on the label. However, for the 2015 release, the release year and the seven-year age statement disappeared from the label.

With all those details in mind, the Jim Beam American Stillhouse bourbon that is the subject of this review may be a 2015 or 2016 release. The packaging for our review bottle (as you will note in our review photo) seems to be the same as the bottles available at the visitor center when Modern Thirst visited in 2015.

Vital Stats: If you happen to find yourself at the Jim Beam distillery in Clermont, Kentucky, you can pick up a bottle of Jim Beam American Stillhouse bourbon for approximately $40 at the gift shop. As with most Jim Beam bourbons, this bourbon likely includes rye grain. You can see a mash bill breakdown for Jim Beam products in this Bourbonr post. As with previous releases of American Stillhouse bourbon, the subject of this review clocks in at 80 proof. However, as mentioned above, this release does not include the seven-year age statement found on previous releases. The bottle for this review is bottle no. 6376 out of 7500.

Appearance: In a glass, the bourbon appears a light honey brown. Furthermore, it should be noted that the packaging for this bottle includes some interesting features likely due to its status as a visitor center only bottle (and likely souvenir). First, Beam chose a wood veneer for the labels. In addition, as you’ll notice in the photo with this review, the neck of the bottle includes twine wrapped around it and a red wax Jim Beam seal.

Nose: Clean and simple notes of corn and vanilla dominate the nose, while subtle notes of clove and mint round out the aroma.

Overall, American Stillhouse bourbon tastes rather thin (probably due to the low proof). Additionally, the pepper notes from the mash bill seem to be slightly out of balance with the sweeter barrel notes, which suggests a relatively short stay in the barrel.

Given that this is available only at the Jim Beam American Stillhouse visitor center, this limited edition bottling probably serves as a souvenir for many bourbon trail tourists that pass through Jim Beam’s Clermont, Kentucky, site. To commemorate a visit to Jim Beam’s distillery, I would recommend picking up a bottle of Jim Beam American Stillhouse Limited Edition bourbon.

However, with the loss of the age statement, it seems likely that this bourbon is just Jim Beam white label in some fancy packaging. With that in mind, I wouldn’t recommend picking up more than one bottle.