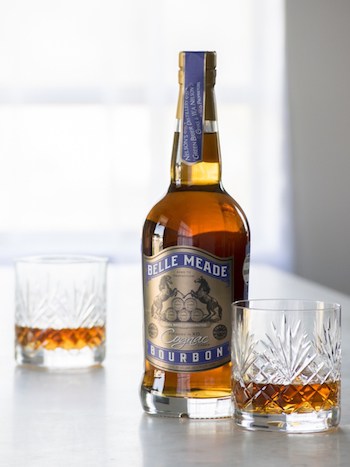 As we reported previously, Nelson’s Green Brier Distillery opened in November 2015—just 105 years after Prohibition forced the closure of one of the nation’s most prolific producers. The distillery is run by Andy and Charlie, great-great-great grandsons of Charles Nelson, who founded Green Brier the first time around. At its high point, in the late 1800s, it sold close to 380,000 gallons of whiskey annually; this was more than 10 times the production of other brands.

The Belle Meade bourbons, currently sourced, are normally high-rye (30%) and made from a proprietary blend of four barrels aged between six and nine years, using two different mash bills and yeast strains. In the case of the expression in this review, it is then further aged in casks made of French Limousin oak, previously used to age fine Champagne XO cognacs. It’s non-chill filtered and 90.4 proof.

Nose: Honeysuckle, brown sugar, caramel, with a whiff of high-proof alcohol. This actually smells like a 100+ proof whiskey—not overwhelming, but still surprising to get so much alcohol on the nose.

Palate: The high rye content of this bourbon provides a chewy, umami quality, which I adore, and the blend and cognac aging supplies a fruity sweetness. It kind of sparkles. Remember Pop Rocks? How they would sort of tickle your tongue a little bit? This is like the Pop Rocks of bourbon—and I mean that in the nicest of ways.

I tend to find cognac a little sharp or bitey, and that still comes through. This sweetens the longer you let it rest. I probably wouldn’t make a drink with this; I’d drink it neat. I haven’t tried Belle Meade’s other bourbons, but it certainly makes me want to. I’d imagine this is sweeter than the sherry-aged bourbon, though it would be fun to compare.

This whiskey is interesting, a little different, and certainly tasty. I like the depth of flavors it brought.

126
Shares
1.8k
Views
Share on FacebookShare on TwitterGet Our Newsletter
Cheers to the Dads! Personalize a bottle of his favorite whiskey to create a modern gift for the modern man. Use code: FATHERSDAY20 for $20 off your next order of $100 or more at ReserveBar