Still Austin Gets Its High Rye, Flagship Bourbon Into Bottle For Release

Austin, Texas is home to Still Austin, a whiskey distillery dedicated to a grain to glass process for its sprits. The team there began distilling back in 2017, releasing their first Texas bourbon in May of last year. Now they are releasing what they are calling their flagship expression, a high rye straight bourbon.

The new Still Austin Straight Bourbon Whiskey, according to those behind it, was aged for at least two years in new charred American oak barrels before being bottled at 98.4 proof (49.2% ABV). It’s comprised of a 100% Texas grown mash bill that includes “70% non-GMO white corn (the same found in Austin’s tortillas), 25% Elbon rye (which imparts a natural spice) and 5% wildfire malted barley.” 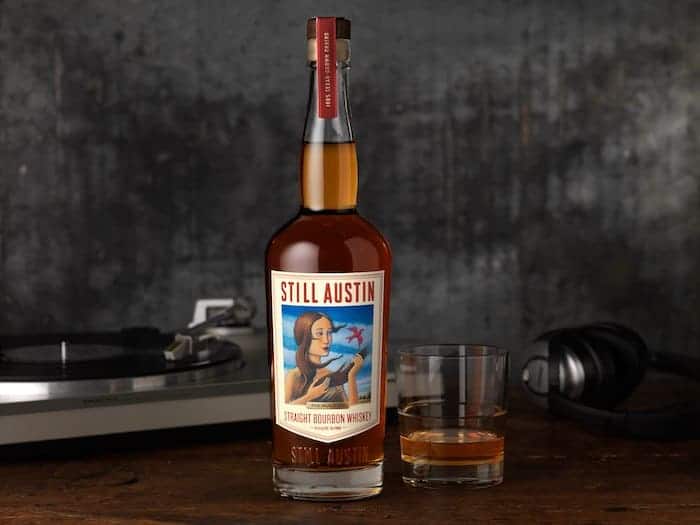 “After six years of hard work and perfecting our technique, we’re ready to launch our new flagship straight bourbon whiskey,” said Chris Seals, Still Austin CEO, in a prepared statement. “We started Still Austin Whiskey Co. because we saw an opportunity to create our own kind of distillery where we do everything intentionally. This bourbon is an expression of true Texas terroir, but also the distillation of all we are, and of all that has created us.

“We’ve managed to bottle the inclusive spirit of our home city; a complex bourbon with substance, flair, and finesse.”

Plans call for this new Texas whiskey to become available in August, pricing around $45 per 750 ml bottle. You’ll find official tasting notes at the end of this article for your consideration.

As an interesting side note, the distilling team, according to the brand, is lead by “Head Distiller John Schrepel, Master Blender Nancy Fraley and veteran Master Distiller Mike Delevante, one of the most experienced and respected distillers in North America who designed the Still Austin distillery to make the highest quality of bourbon. That includes a 42-foot custom-made column, ‘Nancy,’ (and her sister copper-pot still, ‘The Queen’) which give the distillers serious creative license to create unique new flavors and spirits.

“The team also uses Texas weather to its advantage. The region’s high heat, humidity and rapidly shifting temperatures encourage spirits to move rapidly in and out of the oak barrels and mature relatively quickly—but, if this process is left unchecked, it can also cause the bourbon to have heavy oak flavor or harsh tannic qualities.

“To prevent this, Still Austin uses a meticulous six-month slow water reduction technique focused on flavor and balance, which gives the alcohol a softness on the palate and brings more “mature” notes, like vanilla and caramel, to the forefront. The result is a bourbon that highlights the natural flavor of the local grain, with no faults whatsoever.”

The nose offers delightful aromas of ripe tropical fruits such as pineapple, banana, papaya, mango, toasted coconut shavings, and S’mores with melted milk chocolate and caramelized marshmallow. These notes follow through to the palate, where the rye makes its appearance in the form of cinnamon toast with brown butter, and blanched almonds. The alcohol is soft and creamy like vanilla egg custard and the mouth feel is round, with long waves of tropical fruit, toffee, and rye spice on the finish.