On The Record With Woodford Reserve Master Taster Elizabeth O’Neill

As Master Taster of Woodford Reserve, Elizabeth O’Neill spends most of her time on the distillery grounds in Versailles, Kentucky. “I actually do work out here. We make it here and you can see it here. I’m not just a talking head,” she laughs. “I live it and breathe it and I work among people who live and breathe it.” Like many people who have achieved such high ranking positions in the bourbon industry, she didn’t start off her career with her sights set on this position, or even the bourbon industry. Rather O’Neill had gone to college to earn both a Bachelor of Arts and a Masters degree in Psychology and to eventually become a therapist.

After having the typical problem plaguing post grads- either being overqualified for or not having enough experience for entry-level jobs- she found herself chatting with a Brown-Forman employee at her brother’s high school graduation party. He mentioned they had someone quit in the Quality Control Sensory lab and asked whether she would be interested in sending over her resume. She sent him her resume that night and was hired shortly after that. “That’s where I got all my knowledge about sensory- I was in Quality Control Sensory.” O’Neill eventually found herself traveling to train others about how to do sensory quality control as well as checking compliance. 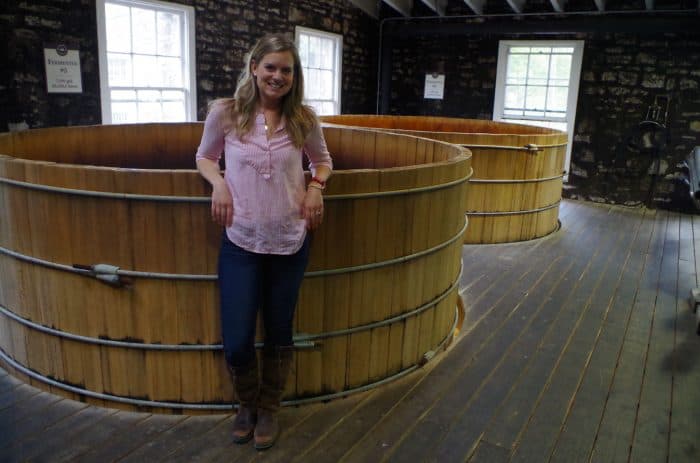 O’Neill was approached in the summer of 2014 about becoming the Master Taster and Brand Ambassador for Woodford Reserve. She began a nine month training process that culminated in earning her CSS – Certified Specialist of Spirits. During that time, O’Neill studied not only Woodford Reserve Bourbon but also every type of distilled spirit imaginable. She also began learning about the history of Brown-Forman during that time, but the emphasis in her training was on the sensory aspects of distilled spirits. After becoming certified she spent some time working with the Old Forester brand portfolio, but ultimately she was assigned to work exclusively with Woodford Reserve.

Today O’Neill is on distillery grounds every day, unless she’s traveling to educate people about Woodford Reserve. She’s involved at least in some small part with everything that goes on in the production side here, and on this particular sunny spring morning she was helping with the daily yeast cultivation in the absence of the head of the yeast lab. Her passion is still sensory quality control, and instead of receiving and preparing samples like she was doing in her previous job, she’s now often taking and sending those same samples to be tested.

In addition to her roles as Master Taster and Brand Ambassador, her primary function when she’s on the distillery grounds is as Senior Quality Control Specialist. Her office is on top of the hill with the new rick houses, which can barely be seen over the tree line from the Visitor’s Center. Every batch of Woodford Reserve white dog that is distilled there has to be qualified and approved before it makes it to the rick house in the barrel. O’Neill maintains and documents the quality control procedures, ensuring quality control measures are always in place and done correctly.

Before she was the Master Taster, O’Neill traveled extensively in Europe educating people about the Brown-Forman spirits portfolio. Since becoming Master Taster she has continued to travel throughout the United States to educate people about Woodford Reserve specifically. “It sounds cliché but my favorite was The Kentucky Derby,” she laughs. “It’s an adventure. Our team has so much fun. The week is super busy and exciting. You’re making drinks at 8 a.m. and talking about something you love and people are excited.” In fact, last year she was able to serve a $1000 Woodford Reserve Mint Julep to Jesse Watters and ended up being in a segment on Fox News.

O’Neill loves having the opportunity to talk to people about Woodford Reserve, admitting with a chuckle, “I’m also very Woodford prideful and I need to cool my jets on that a little.” She recalls a moment recently when she traveled out to Seattle to talk to a group at a Whiskey and Women event and being surprised people were not only interested to hear her talk but also excited to meet her. “It’s a cool reminder every time and I hope it’s always that way.”