Pat’s Collection, as we touched upon late last month, is a roughly 9,000 bottle whisk(e)y collection put together by a former “whisky novice” over the years. It is now being auctioned off in segments by Whisky Auctioneer, a whisky auction site out of the United Kingdom. Currently on the block is the American whiskey segment.

The Collection’s range of bourbons and American whiskeys, according to the auction house, consist of the so-called “heart and soul of the collection.” Fans of American whiskeys will take note the auction includes “a near complete collection of the Buffalo Trace Antique Collection, sought-after Pappy Van Winkle bottlings and the 1974 A.H. Hirsch Reserve, a legendary bourbon that is the subject of an entire book.” 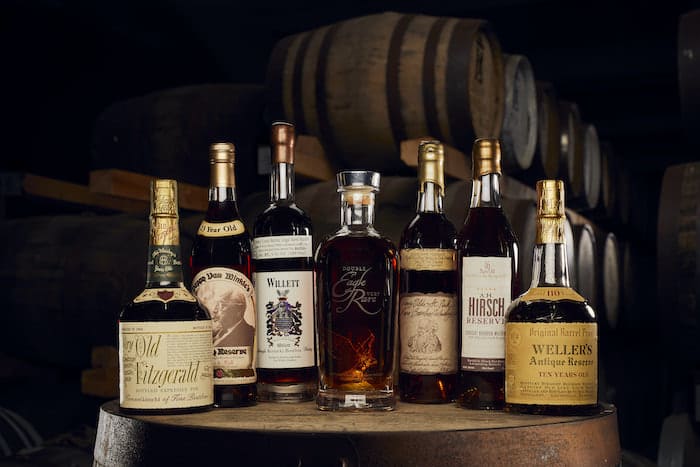 The American whiskeys of Pat’s Collection (image via Whisky Auctioneer)

Alongside of these are also bottlings such as

It is said that, “after purchasing and tasting a bottle of Very Olde St. Nick in a whisky shop in Japan, Pat ‘fell helplessly in love with aged bourbon and rye.’ The rest is history as Pat’s quest to explore the world of American whiskey was set in motion, he searched auction sites across the world, begged friends and instigated business trips to source his next bottle.”

“The American whiskey segment of Pat’s collection is undoubtedly one of its most important and impressive components,” said Joe Wilson, head of content at Whisky Auctioneer, in a prepared statement. “The collection is a staggeringly complete forensic examination of the prestige and collectable bourbon that commands our market today, and how we got there. It is both retrospective as well as modern, encompassing careful selections of the revered output from historic Stitzel-Weller distillery, with a dutifully curated library of 21st century classics from the Buffalo Trace Antique Collection and beyond.

“The ‘heart and soul’ of Pat’s collection is confidently the most comprehensive record of American whiskey to be offered by a single owner in a single auction. We are honoured to work with Pat in bringing this truly ‘one of a kind’ opportunity to a global audience of bourbon and American whiskey aficionados.”

The auction is currently ongoing, having started October 9th and running through October 19th.