Like their standard bottling, this is a four-grain bourbon, made with corn, wheat, rye, and barley, some of which are smoked over apple wood. We sampled that one last spring, and our reviewer gave it a decent score, calling it “easy and pleasant” and picking up just light smoke but noticeable apple notes. As noted in the review, Iron Smoke has picked up some accolades in recent years, including a 95.5 rating in Jim Murray’s 2018 Whiskey Bible. 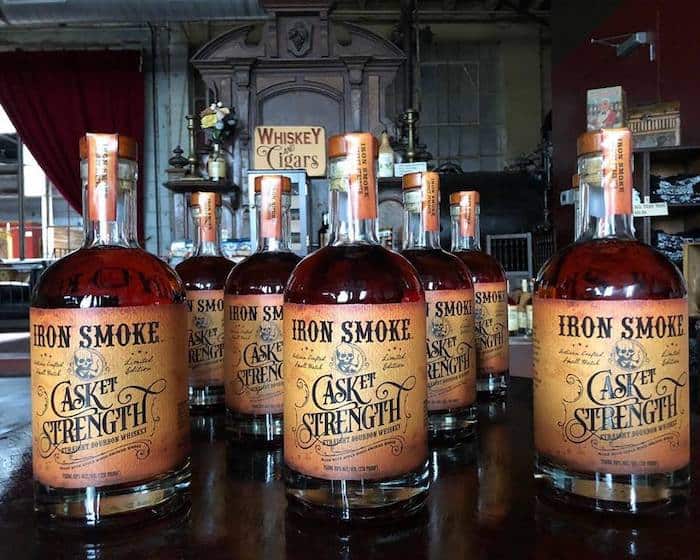 “This is based on the growing popularity of truly handcrafted cask strength and unfiltered offerings from pure hearted distilleries that have taken the long hard road of making their own products without any filler from outside sources,” said distillery president Tom Riggio in a prepared statement. “This release, as well as the recent accolades we’ve received from Forbes naming Iron Smoke one of the top 10 bourbons produced outside of Kentucky proves that we are building the brand the right way! We look forward to working with our distributors to make Iron Smoke a household name across the country.”

True to that “pure-hearted” self-description, Iron Smoke sources their grains from farms within 50 miles of the distillery, and sends the spent grain back to some of those farms for use as livestock feed.

This expression is hand-selected and bottled (as the name suggests) at a healthy barrel strength of 120 proof after being handpicked “from thousands of their very own triple char virgin white oak barrels.” Limited official tasting notes from the distillery are sparse, calling out just “notes of butterscotch, vanilla, and caramel.”