Have you ever stood in front of a wine display in a store, completely baffled about which to buy? And your primary selection tool is the label? Or with other types of alcohol? Heck, I know a little something about whiskey and when pressed to find something new, I, too, am unduly influenced by marketing.

That’s why it took me so long to try Iron Smoke Applewood Smoked Whiskey. It was sitting on my “to be reviewed” table (yes, I have a table just for this), and I assumed—based on its outward appearance—that it was going to suck. Even their website is a little, too…too, you know?

According to Distiller and Caskers, Iron Smoke is a partnership between Tommy Brunett (of the New York state-based Tommy Brunett band) and distiller Drew Wescott. Because what goes better than whiskey and rock & roll?! The whiskey is locally sourced and made in Fairport, located in upstate New York.

It’s a four-grain—corn, rye, wheat and barley—recipe, though it’s unclear of the percentages of each. They’re all smoked over applewood prior to the milling and mashing process. The whiskey is aged in new, triple-charred virgin American white oak and brought to proof with local spring water.

I was torn. It seemed like they were all about the look of the labels and the website cheesiness, but they’d also won some decent awards. Would I be taking one for the team, or jumping onto the bandwagon? 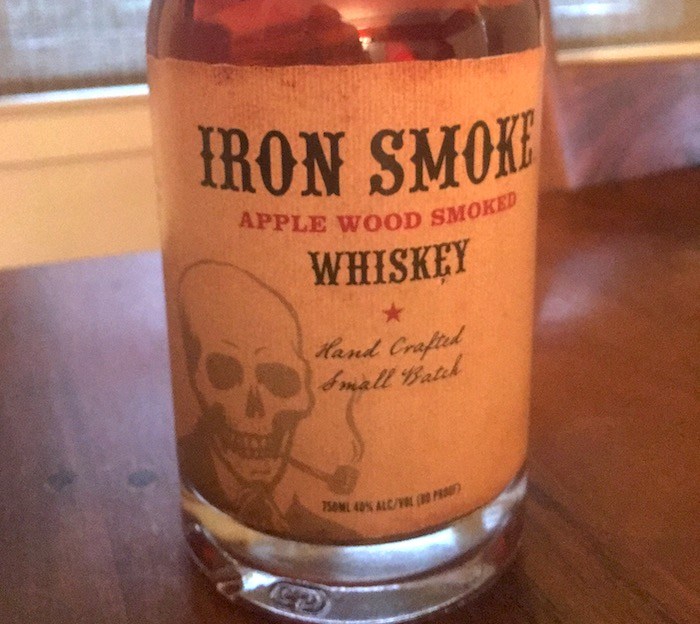 Vital stats: 80 proof; mashbill of corn, rye, wheat and barley, though unclear of the ratio of each; about $40.

Appearance: Mainly unremarkable; it’s the brown of whiskey. But also: A light, reddish-brown hue, the color of a faded turn signal in an old car.

Nose: Despite this being smoked over applewood, I don’t get any smoke on the nose, no matter how I breathe it in. I do, however, pick up a lot of apple—both fresh and dried apples. Also, fresh paper. Some just-peeled banana.

Palate: On the palate, the smokiness emerges, but it’s not overwhelming. I’d call it super-mild. In fact, I wouldn’t even describe this as smoky. I’d call it sweet, but not saccharine or candy-like. It’s mellow; I could see it with a little water, or an ice cube, but it’s already pretty mellow as-is. It has an easy and pleasant finish that my awesome and occasional tasting partner and I quite enjoyed.

Iron Horse bourbon isn’t breaking down any barriers, but it’s a good drink. Sometimes it’s good to sip something that's nice to have around, like that friend you don’t often see but whose company you truly enjoy when you do. Iron Horse’s marketing does their whiskey a disservice. I’d pass over it in the liquor store, because I’d assume it was a wanna-be Fireball. Rather, this is a quality product I’d be happy to drink any time. It’s so much better than their label implies.