The Colonel E.H. Taylor line up of bourbons from Buffalo Trace in Kentucky has long been a popular favorite among the many whiskeys from this distillery. Of notable consideration are the more collectible ones, such as the now legendary Warehouse C Tornado Surviving Bourbon that normally now sells for very inflated prices on the secondary market. Joining these soon may be a new Warehouse C bottled in bond expression.

Information from recently approved bottle labels posted on the TTB’s public COLA registry database reveals a new Warehouse C offering in the works (note that, as always, labels that appear at the TTB site don’t necessarily mean the final whiskey will actually come to market). What’s known of this planned bourbon, according to the labels, is the following:

The back label also reads specifically that “in 1885, Colonel Edmund Haynes Taylor, Jr. completed the construction of Warehouse C, realizing his vision for a ‘Model Distillery Plant of the World.’ As the founding father of the modern bourbon industry, the legacy of Colonel Taylor lives on at Buffalo Trace Distillery, where Warehouse C stands to this day. 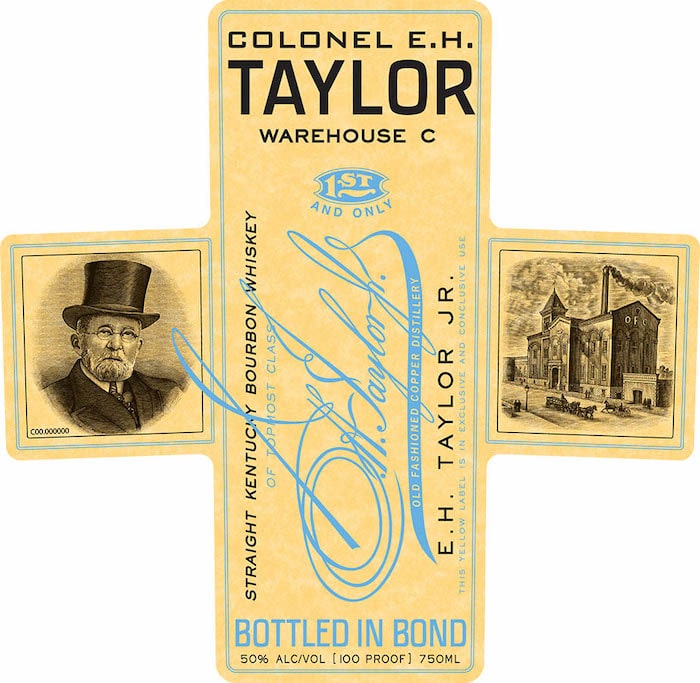 “This bottled-in-bond whiskey aged for ten years in the very warehouse Colonel Taylor built over a century ago, testament to Taylor’s enduring commitment and uncompromising passion for producing Straight Kentucky Bourbon Whiskey of topmost class.”

Details beyond this are not public at this point from the distillery, including an official release date or pricing. It is also not clear if this will be a limited edition or perhaps a new ongoing release. Any way you look at it though, it is likely something that will be well sought after by fans of this brand and beyond.

Warehouse C, for those unfamiliar with it, is a well known landmark on the Buffalo Trace campus. Built in 1881, it stores over 24,000 barrels of whiskey from this distillery. What typically puts it most into the mind of collectors is the previously referenced Warehouse C Tornado Surviving Bourbon. This once in a lifetime bottling was the result of a severe storm back in 2006 that damaged on its roof and north brick wall at the time. As information from Buffalo Trace put out in early 2012 describes it, “throughout the strong storm that raged across the Distillery, the bourbon barrels stood strong, never budging from their resting spots. Patiently they waited while the roof and wall repairs took place that summer. The barrels sat exposed to the central Kentucky climate for months as the sun and wind took their toll.

“Finally in late 2011, those same barrels were tasted and the bourbon was married into a single batch dubbed ‘Warehouse C Tornado Surviving Bourbon.’ It was only fitting this bourbon would be released under the Colonel E. H. Taylor, Jr. moniker, as he was a bourbon industry survivor himself. Taylor owned and lost more than seven distilleries in his lifetime and built many of the buildings at Buffalo Trace Distillery, including the storm damaged Warehouses B and C.

“This Rye Mash #1 recipe bourbon has the aroma of dried fig and cloves that jump from the glass initially along with plenty of baking spice. An oaky dryness provides balance, which quickly builds the anticipation for a taste. A small sip fills the mouth with jam-like cooked fruit, vanilla, and a touch of smoke. The finish quickly builds in dark spices until the end as hints of tobacco leave you with the final impressions of this bourbon.

“During the summer of 2006 the sun and weather inevitably contributed to increased evaporation, wood interaction and rich flavors in this bourbon whiskey. The angel’s share amounted to an astonishingly high 63.9% loss.”

At the time it was released it priced around $70 per 750 ml bottle. Today it is not uncommon to see rare bottles of it floating around in specialist retailers and the secondary market for thousands of dollars. It was well received by reviewers at the time it came out, and from there its popularity, rarity and pricing have become legendary.